The Good Wife leaves another kind of void

The last prestige mass-market drama comes to a close 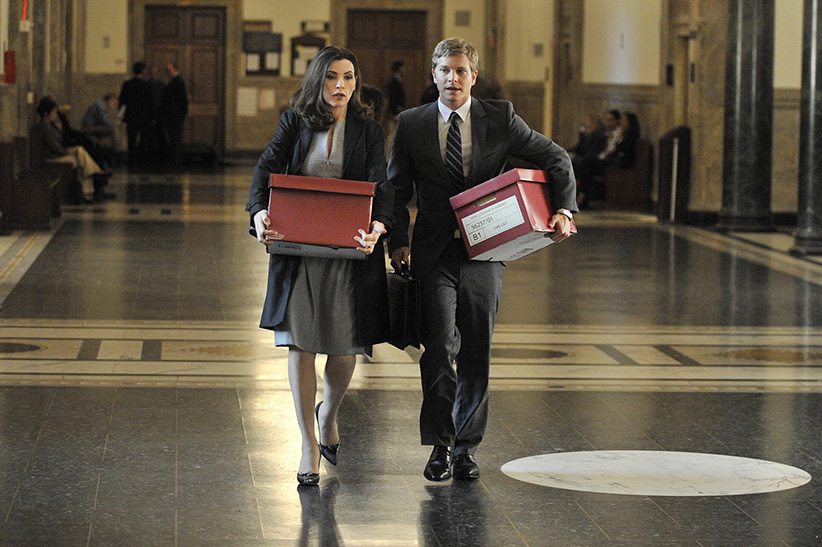 The Good Wife shouldn’t have happened in this day and age. The drama series, whose last episode airs on Global on May 8, belongs to a genre that was already considered a little old-fashioned when it started in 2009: a lawyer drama where the main characters take on eccentric cases every week, like Ally McBeal or The Practice. In an era dominated by serious cable dramas, its premise sounded like it would be just another old-school show for its network and producer, CBS.

And yet the story of Alicia Florrick (Julianna Margulies), a politician’s wife who returns to law practice after her husband is brought down by a sex scandal, became a critical favourite and the last broadcast network show to date to get an Emmy Award nomination for best drama series. “It has been a nice badge of honour to be the only network show recognized,” says David Stapf, president of CBS Television Studios. The Good Wife did turn out to be old-school, but in an unexpected way. It became the last great example of a dying breed of television: the prestige mass-market TV drama.

The traditional drama with a reputation for intelligence—what used to be called “mass with class”—used to dominate the Emmys with shows like The West Wing. But by the time The Good Wife came along, TV had mostly divided itself into high-quality shows for relatively small audiences—often those who could afford cable—and relatively undemanding shows for larger audiences. CBS, which took The Good Wife after ABC turned it down, was known for leaning toward the latter, with most of their dramas following strict formulas, like Criminal Minds and NCIS.

The creators of The Good Wife, Robert and Michelle King, didn’t try to go against that formula completely. “There was a lot of talk about what should be the balance between personal stories and procedural stories,” Michelle King recalls. “We hit upon the idea that it should be about 50-50. As the seasons have gone on we’ve tipped a little more toward the serialized story.” That was the balance familiar from other prestigious network dramas like Hill Street Blues: we’d follow Alicia’s attempt to start her own law firm or run for her husband’s old political job, but unlike a cable drama, there would always be something for the casual viewer to grab on to. 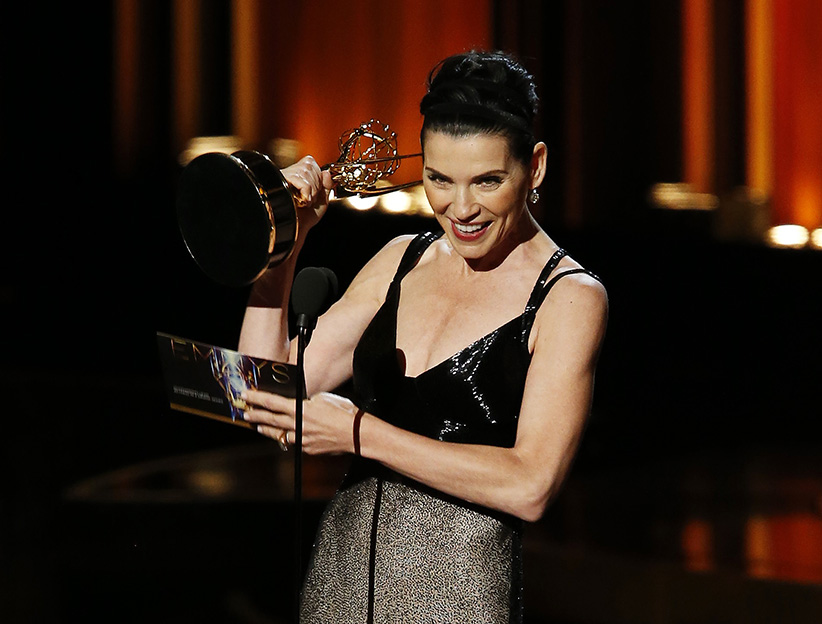 Julianna Margulies accepts the award for Outstanding Lead Actress In A Drama Series for her role in “The Good Wife” during the 66th Primetime Emmy Awards in Los Angeles, California August 25, 2014. (Mario Anzuoni/Reuters)

The show’s format wasn’t the only thing that set it apart; thematically too it was unusual. From the pilot onward, they tried to do stories that were ripped from the headlines. “All the writers are news junkies, so we’re always looking for an interesting story or quirk in the law, something that might be exploited,” Michelle King says. But where shows that exploit current issues are often seen as, well, exploitative, like Law & Order: SVU, when The Good Wife did episodes about everything from 3D-printing guns to gay marriage, it rarely seemed to be cashing in on them; people felt it had something interesting to say that you wouldn’t normally hear on a network TV show.

Even the premise of the series, partly based on the scandals surrounding politicians like Eliot Spitzer, was about examining these scandals from the point of view of someone who is usually overlooked. “There was always that woman standing next to the guy on the podium,” Stapf says. “They were fascinated by that aspect of it. What’s her story? What’s going through her mind as she stands there by her man?”

The decision to focus on this kind of character may have been another thing that set the series apart. The typical CBS show stars heroes or heroines who are nearly perfect, flawed only by caring too much about their jobs, like Mark Harmon’s character on NCIS. At the other end of the spectrum, most modern prestige dramas have no place for heroes at all. But Alicia was in the middle: not an anti-heroine, but someone who was allowed to make a lot of mistakes. Stapf recalls a favourite wordless moment in the pilot, “when Alicia is in court, she’s doing her thing, and as she returns to the little table where they sit, she bumps into the corner of the table. What it says is that she’s still a rookie. She’s not fully on her edge, not as polished.” In later episodes, Alicia would constantly arrive late to meetings. In her first days as state attorney, she ticked off important party supporters and had to retrench—that is, before she was turfed outright.

The creators, along with pilot director Charles McDougall, also made the show look more serious than the usual procedural. Even procedurals with visual flair, like CSI, often went for an escapist fantasy look. But The Good Wife not only tried to capture the look of modern law firms and political offices, it tried to do it in a way that had some of the visual symbolism we associate with cable dramas. One of the decisions the creative team made was to make the characters work in transparent settings. “The difficulty of that for filmmaking is that reflections are everywhere,” Robert King says. “It’s a nightmare. But we still wanted the sense of a glass house, and that you can’t keep anything private.” A running theme of the show, as Stapf points out, is “how many scenes they play in elevators,” the only place in the office where anyone can get any privacy.

Despite this kind of thematic seriousness, the show always kept one foot in the world of network drama. That included the necessity to retool sometimes in a way cable dramas don’t always have to do. Robert King says that while CBS was very supportive of the show, they did have to de-emphasize the serialized storytelling for a little while when they were trying to get the ratings up: “We had a challenge to grab new viewers at the beginning of the third season by doing more self-contained episodes. But that quickly went away.” The writers had to work around high-profile departures, killing off one major character when the actor (Josh Charles) left the series, and going through a notorious period when Kalinda (Archie Panjabi) and Alicia were almost never in the same scene together.

The most famous collision between storytelling and fan demands came in the fourth season, when a storyline, about Kalinda and her husband, turned out to be enormously unpopular. “One of the writers was coming back from the Starbucks where he goes every morning, and a husband that he knows pulled him over and said, ‘Yeah, we don’t like it,’ ” Robert King says. “We knew from that, not so much from the Internet. We try to go on personal connections.” The story was cut short and the season reshaped. On a cable series, creators don’t usually deal with this kind of thing until the season is over; a network drama, even a prestigious one, needs to follow the ratings and viewer feedback.

But if this situation can give creators less freedom, it may also have helped The Good Wife stand out. The show always seemed conscious of its responsibility to balance issues for the larger, more politically diverse audience of broadcast network TV. This often led to sympathetic portrayals of people who aren’t often portrayed sympathetically: Alicia was an open atheist who struggled with the question of whether these beliefs would hurt her political career, while her daughter Grace, (Makenzie Vega), became a Christian and had respectful arguments with her mother about religious issues. The middle-of-the-road nature of the prestige network drama—the need to see both sides of every argument and not alienate liberal or conservative viewers—helped give The Good Wife a more diverse range of ideas than many other TV shows have.

None of that meant The Good Wife had a chance of beating the big cable dramas when Emmy time came around. This was clearly frustrating to some: CBS ran an unsuccessful Emmy campaign based on pointing out how much more work it is to do a 22-episode season of The Good Wife than an HBO or AMC series, which do half as many episodes. Those smaller episode orders make it possible for dramas to be more coherent and consistent than a network drama like The Good Wife. “It’s very hard to maintain a voice for 22 episodes,” Robert King says. “You can do a good show—it really kills you, but you can do a good show—but the difficulty is maintaining a single voice.” A cable drama can be like an independent movie, or even a big-budget epic. The Good Wife produces as many episodes as it can, some of which are better than others. Its compromises and flaws are more visible.

That alone makes it representative of a different way of making TV: less self-consciously artistic than cable, but less populist than the usual TV fare. And despite its reputation, CBS didn’t try to make the show over into something less ambitious: “The way that would have happened would have been telling us to cast younger actors, and that’s not the case,” Michelle King says. “They’ve really embraced the show for what it is.” Now that it’s going away, there may not be a show to take its place. “I think it’s wholly unique,” Stapf says. “If there have been imitators, I haven’t really noticed.” The future of TV drama may be a bigger split between advanced and traditional storytelling. But at least there was one final show that tried to do both at the same time.