The key to Full House's revival? Bring back the schmaltz.

There’s a reason Full House, a show no one admitted watching, is everywhere. 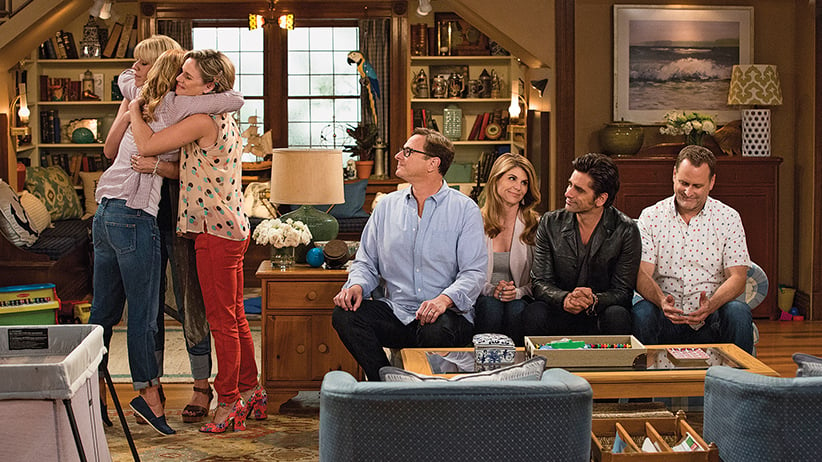 When a TV show gets revived we expect the original to be an award-winning classic with a passionate fan base, like The X-Files. So how do we explain Full House? Starting this month, Netflix is offering Fuller House, a sequel to the 1980s and 1990s sitcom about widower Danny Tanner (Bob Saget) whose two male friends help him raise his daughters. That show ran for eight seasons as part of ABC’s family-friendly Friday night lineup, TGIF, but it wasn’t a hit on the level of Cheers or Seinfeld, and few people over the age of 12 would admit to being fans. Now it’s hard to imagine a revival of Cheers, but Full House is everywhere.

“I didn’t like it, ever, but I would watch it if it was on,” says Ryan Alexander-Tanner, who created the website Full House Reviewed to mock the show’s cheesy writing and acting. People enjoyed the mockery and went right back to watching Full House.

Most shows, even successful ones, fade away. The producers of Full House, Thomas L. Miller and Robert L. Boyett, had other hits that can’t get revived. The best Laverne & Shirley could get was an aborted attempt to do a reality show about the series’ stars, and Family Matters was one of many forgotten 1990s things that got mocked on the show Key & Peele. Even current sitcoms, like Modern Family, often have little impact in reruns.

People might have expected modern audiences to be similarly uninterested in Full House, which is so much a product of its time that star John Stamos sported a huge mullet in the early episodes. Instead, syndication turned it into a phenomenon. In the 2000s, Full House repeats would appear on lists of the top 15 prime time cable shows behind Sex and the City but before Law & Order: SVU.

There are reasons Full House endures. For one thing, it was built on running gags and catchphrases that we recall years after we forget the plots. In the pilot of Fuller House, creator Jeff Franklin revives these old bits, like Danny’s obsession with cleaning and Kimmy Gibbler’s smelly feet. Repetition makes a show memorable.

Full House also had a premise accidentally ahead of its time: the idea of three single men raising girls has become more appealing as non-traditional families have become more common. “It’s like this little-girl power fantasy,” says Alexander-Tanner. “These three little girls have a lot of agency in their home and they have these three non-threatening dads who are doting on them all the time.”

The show also benefited from its truly over-the-top sentimentality. It starts with three girls losing their mother, and every episode has a tear-jerking speech accompanied by soft music. Fuller House’s producers knew that, to be true to the original, the show had to be depressing: Danny’s oldest daughter (Candace Cameron Bure) loses her husband, and her sister (Jodie Sweetin) and best friend (Andrea Barber) move in to help with her kids. It’s not Full House if someone doesn’t die to get the show on the air.

That manipulative appeal may have helped keep Full House around. The only other show of the TGIF era with the same fame is Boy Meets World, whose sequel series, Girl Meets World, is a success on the Disney Channel. Boy Meets World, like Full House, was willing to leave laughs behind and become earnest and moralistic. Fuller House is a little more tongue-in-cheek, with characters commenting on the constant group hugs—but it’s still sweeter and less ironic than most modern family entertainment. It’s safe.

There’s another word for safe TV, of course: old-fashioned. “I watched an episode of Girl Meets World about smartphones and it was clear that some old man wrote it,” Alexander-Tanner says. “The dad tells the kids to go to the library.” He thinks that Fuller House “could point a spotlight on how misguided and outdated” the original is, because 1980s sitcom values won’t work with modern problems.

But if the revival does work, there’s a chance that Full House’s popularity could lead to renewed interest in other less-remembered shows of the period: Boyett told the Television Critics Association that “people have expressed some interest” in a revival of Perfect Strangers. More Perfect Strangers? Bring it on.