The Maclean's Bachelor Panel, Week 9: The waterworks after the final rose

Find all of the Maclean’s Bachelor Panel posts here. 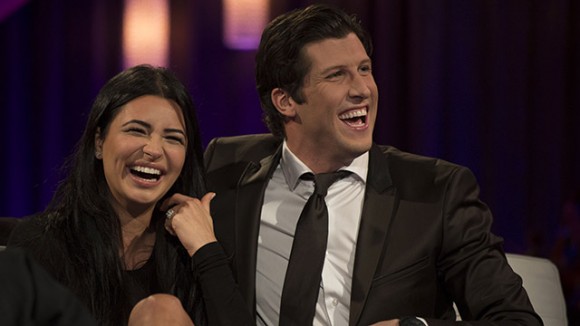 From: Sonya
To: Colin, Aaron

There you have it, Canada. The journey of “Canada’s first bachelor, Brad Smith!” has concluded. (It’s a little known fact that all other Canadian men are married at birth.)

In this week’s After the Final Rose episode, host Tyler Harcott welcomed Brad, Bianka and Whitney to turn on the waterworks in front of a live television audience. It was a far more interesting hour than the bachelorette tell-all episode for two reasons. One, we actually remembered everyone on stage. Two, they had something to say – not just scores to settle.

It’s the humanizing aspect that I found most powerful. Whitney, do you read this panel? If you do, I’m sorry that I’m one of those people who brought up the vein in your head, which you understandably found hurtful. (I did so because it illustrated so very well the intensity you were bringing to the competition.)

Whit told the audience she has no regrets about going on the show, saying she learned a lot about herself, and yet…“Now people recognize me – to my face people are obviously really nice.”

I don’t think post-Bachelor life has been easy for Whitney.

You don’t have to take reality TV very seriously–you shouldn’t, even–unless you’re on it. That’s about the only circumstance in which the genre is real. What I took away from Whit’s interview is that she went into the mansion looking for love, and found both a nice guy and her competitive edge. The mid-season awakening that she was not ready to spend the rest of her life with Brad looked bad on TV, while being a perfectly reasonable assessment otherwise. Frankly, that ring Brad gave Bianka looks tough to lug around.

Oh, Brad and Bianka. What do you think, Colin and Aaron? Are those crazy kids going to grow old together? They’re obviously very into each other, with the host crediting Bianka with “stealing his heart and earning his love.” (If she stole it, how did she earn it, I don’t know.)

“This is the best thing that ever happened to me,” Brad declared. “When I say that I won the Lotto coming onto the show, it’s because she was there at the end.”

The bachelor and his bride-to-be are of the touchy-feeling variety, and plan to get married as soon as possible and have as many children as possible. This is excellent news, as Canada has not yet had a spin-off of either Jon & Kate Plus 8, or 19 Kids and Counting.

As for that other show we’re all anticipating–The Bachelorette Canada–well, Whitney looked really hot tonight.

From: Colin
To: Sonya, Aaron

I find it interesting–perhaps telling, too, though I don’t really know what of–that even after the Bachelor Canada effectively drew to a close, and with only some when’s-the-wedding? loose ends to be tied up between Brad and Bianka, Whitney remained the most vital part of the show. Even with the big secret revealed and Brad and Bianka’s glowing, loving faces the main focus of the night, it all would have been nothing without Whitney. She even dominated the denouement.

So I guess thank goodness she didn’t tell Brad how she felt back in Penticton, when apparently she was already having silent doubts about whether she was really that into him. Had she been open and honest like he wanted her to be, she would have been gone from our TV screens much sooner. But I wonder about this a bit when considering Whitney’s confession last night that her life since the show has been difficult, what with the country sort of hating her and all. As much as the remaining weeks of the program might have suffered without her, it could be argued that her life would have benefitted. She might have lost the competition, but her honesty would have freed her from so many other things. If only she’d told the truth.

And I guess I’m also one of those tough people behind the computer that has contributed to her pain, and made things hard for her as the show has gone on. And perhaps I might owe her an apology. Whitney’s right, I don’t know her, and I don’t really know what she was thinking all these weeks. But, again, apparently nobody else did, either. That’s kind of exactly the point of why it ended the way it did. We all–including Brad–were just guessing.

As for Brad and Bianka, things seem, overall, fine between them–even if Brad apparently has difficulty leaving Bianka’s side when she is stepping into the washroom for a minute. (That was weird, right?) Are those crazy kids going to grow old together, you ask, Sonya? Who knows? And, not to sound harsh, but does anyone care?

I, for one, don’t. I like that they found each other, and I enjoyed watching that happen, but there’s nothing particularly interesting about them now. They are a very conservative, bread-and-butter kind of couple at the moment, it seems. There’s nothing wrong with that at all, but that being the case, I’m happy there are no more cameras following them around. Happy relationships aren’t interesting. Let me know when their lives are falling apart. I can identify with that.

Anyway, now it’s over and our Wednesday nights are finally clear again of any extra, albeit removed, drama. I’ll sort of miss it, probably, when next week rolls around, but, as you say, Sonya, there’s always one more person waiting in the wings, hoping for their chance at love and quasi-fame and free leg razors and crackers and all the other things that reality TV promises us. I doubt it will be Whitney who takes part, should there be a follow-up. But if anyone’s taking a poll, she’d be my first choice.

From: Aaron
To: Colin, Sonya

I actually think this is probably the truth. I really, truly think that we saw the “real” Whitney. As silly a standard as this is.

The idea that you wouldn’t “act” on a reality TV show is fairly preposterous. There’s a camera watching you. You’re being watched. You’re going to end up “playing” a part. This is probably true in almost all situations involving a camera. When I go on TV to talk about the news, I’m playing the part of a respectable journalist (and trust me, it’s a stretch). Even if that just means sitting up straight and remembering not to swear and allowing someone to put makeup on my face (damnit, I said apple blossom blush, not peach!).

That said, I think two things are basically true. That Whitney approached this show with a particularly competitive perspective and she was incredibly intent on winning. And that, as the show progressed and it became clearer what full extent of what winning nominally entailed, she realized she wasn’t actually that interested in winning. If this is the case, it must be said that this is also probably a perfectly reasonable reaction. You go on a show and you try to win the show, but halfway through you realize you’re not quite sure about winning, given that winning involves being in a committed, loving relationship with someone (at least in theory and at least for a little while). Maybe she should have thought this through earlier, but, as it is, I can imagine the “reality” of the situation hitting you a bit late. I believe you, Whitney. (Now please never go on another reality show again.)

On the winning side, I thought it was interesting that Brad identified the turning point in his relationship with Bianka to be the afternoon she expressed hesitation at taking part in the “overnight date” with him. Again, Bianka’s response was perfectly reasonable. Oh, you want to have hot, passionate “overnight date” with me while having hot, passionate “overnight date” with two other women, with whom I am competing for your lifelong commitment, in quick succession? Why should anyone be expected to say yes to this without pause? If I was the Bachelor (sorry ladies, I’m taken), I think I would similarly be impressed with the woman who thought this was kind of messed up. I think I’d probably agree with this woman, high-five her and then run away with her (as the production crew chased us in helicopters.)

If I could counsel the happy couple I would similarly recommend that they now run away. They seem happy. It’s possible they got lucky (in the lifelong-love sense, I presume they have overnight dated several times now). But if they decide to get married, they should not tell anyone about it. Do not push that luck. I accept that it’s possible for this bizarre thing to result in something good and real, but I fear that every time you appear on screen, you increase the possibility that it will all end terribly. So, with all respect and admiration and hope, I say this to Brad and Bianka: go the hell away. Hide in the bathroom together if you must (although, yeah, that’s kind of weird, dude.)

And with that, I declare the Bachelor Canada panel adjourned. Although I note that a new season of the American Bachelor starts in January. So maybe we’ll reconvene very soon.