This Jeopardy! superfan and archivist has helped train the all-time greats 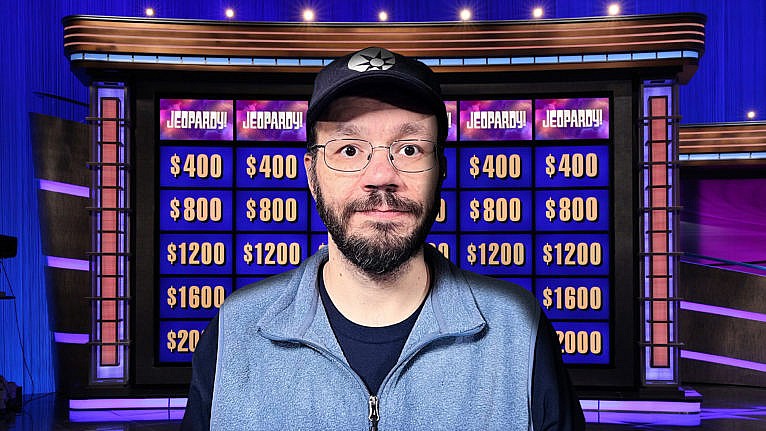 Andy Saunders watches each episode of Jeopardy! only once and without pausing the TV, which in itself is an achievement considering all the work going on behind the scenes at his home in Guelph, Ont.

Armed with an Excel spreadsheet and a website, The Jeopardy! Fan, Saunders recaps every show with nuanced statistics, such as what percentage of the time each contestant is first on the buzzer; what each player’s score would have been if all wagering on Daily Doubles were disregarded (better known to hardcore fans as the “Coryat score”, named after a former contestant); and mathematical simulations to predict, for example, that fellow Canadian and 22-day Jeopardy! champion Mattea Roach has a 46 per cent chance of extending her current win streak to 25 games.

And that’s not counting all the time spent shouting out responses to the clues he thinks he knows, while updating his nearly 11,000 Twitter followers that include former Jeopardy! guests hosts, tournament of champions winners and even the official Jeopardy! social media account.

“I usually watch by myself,” Saunders says. “If there were other people, I think they’d be concerned by all of this stuff that goes on.”

RELATED: Clue: This Jeopardy! contestant from Nova Scotia is on an all-time hot-streak

It wasn’t always a solo affair. Saunders was in diapers when the daily syndicated version of the show premiered with Alex Trebek as host in 1984. Saunders’ dad, a trivia buff, became such a fan that he would record every episode on VCR so the family could binge watch on weekends together. By the early 1990s, they were so invested in the show that the category reveals became part of the fun: the words started as a jumble, so his dad would pause the tape and skip forward frame-by-frame to see who could correctly guess the category first.

Saunders joined trivia competitions like Reach For The Top in high school and by university graduated to Quiz Bowl. But it wasn’t until he was studying at Brock University in 2004, as Ken Jennings started his historic 74-game winning streak Jeopardy!, that Saunders says he evolved into  a superfan of the show.

That same year, Saunders became one of the founding archivists of J! Archive, a fan-maintained database tracking every single Jeopardy! clue, dollar amount and contestant’s response dating back to season 1 of the game show in 1984. It’s a website that Jennings used for research and former Jeopardy! champion Amy Schneider credited as the best preparation for her 40-game win streak in which her total earnings exceeded US$1million. Meanwhile, when Trebek was first told about the J! Archive, he reportedly replied: “Come on, people. Get a life.”

“Alex, being slightly more old-school, probably would have thought: ‘Why do they care so much about Jeopardy?’ Saunders says. “Which is fine. I had no problem with him thinking that at all.”

Saunders’ time spent maintaining The Jeopardy! Fan—a site he took over from Jeanie Kenkel in 2015 (who once finished as runner-up during her lone appearance on the show in 2012)—now encompasses the majority of his work thanks to Patreon support, merchandise sales and advertising.

He has witnessed firsthand the impact hard-core fans like himself can have. When Michael Davies took over as executive producer in 2021, for example, Saunders says the game show took better notice of the grassroots effort to compile statistics, as if it were some kind of sporting event. Jeopardy!’ recently added daily post-game box scores on its own website, including data on each contestant’s longest streak controlling the board.

Saunders, however, has never controlled the board himself. He’s auditioned several times—and even met Trebek once in person during a 2017 audition in Toronto when the late Jeopardy! host made a surprise audition appearance—but he has yet to be selected as a contestant.