WKRP in Cincinnati, the Complete Series: A home video review

The DVD release of the cult rock-n'-roll sitcom is much better than fans expected. 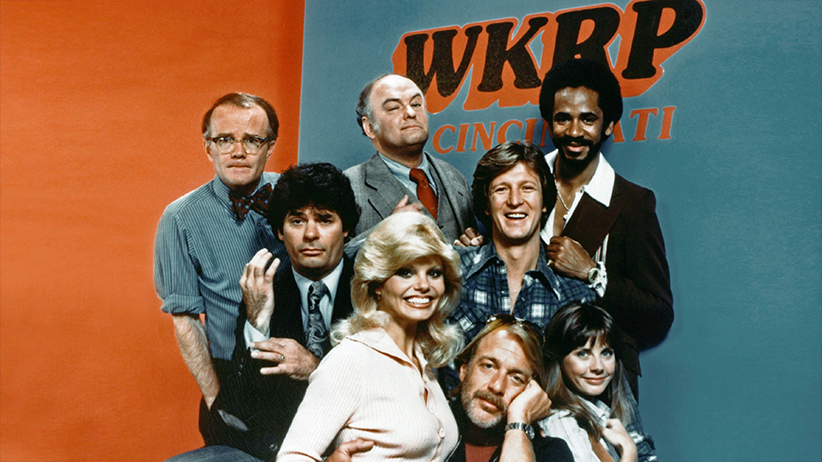 Something about WKRP in Cincinnati makes it a very special show. It’s very much a product of the late ’70s and early ’80s, with the hair, the attitudes, the mix of farcical comedy and serious moments. But creator Hugh Wilson and his writers and cast gave the series an idiosyncratic writing and performing style that belongs to this show and no other; the four seasons abound in memorable comic setpieces, running gags, and character relationships, and the best episodes are as good as anything in the history of American sitcoms. People who know me know that this is one of my favourite shows; the show had so many wild shifts in tone, so many unexpected ideas for episodes, that it felt like there was always something new in every episode, whereas even many great shows just give you a different version of the same thing every week.

Wilson’s decision to use real recordings for the story of a fictional radio station, common now but unusual in the TV of the era, has caused a lot of problems for the show; music started getting stripped out of episodes soon after it went into reruns, and the only previous home video release, Fox’s 2007 set of the first season, eliminated nearly all the music. A lot of fans wondered if the show was simply impossible to restore. I’m happy to say that Shout! Factory’s 13-DVD set of the complete series, available Oct. 28, proves that, for the most part, it can be done. It’s not a perfect set, but it’s the best release of WKRP in Cincinnati we are ever likely to get, and much better than I ever expected.

I would say this set includes most — not all, but most — of the music. Johnny Fever plays Queen of the Forest by Ted Nugent in the pilot to announce WKRP’s switch from muzak to rock n’ roll. Les Nessman gets ready for the date in “A Date With Jennifer” to the sound of Hot Blooded by Foreigner. “Young Master Carlson” features Johnny lip-synching to Van Morrison’s Caravan. Thematically important songs like After the Love Has Gone by Earth, Wind and Fire, Tiny Dancer by Elton John, Had Enough by the Who and Our Lips Are Sealed by the Go-Gos are where they should be, the Jerry Falwell-esque preacher in the season-three finale reads the lyrics of John Lennon’s Imagine out loud, and there are even a few artists Shout! didn’t mention in its list of featured groups, like the Kinks. Even tiny little snippets of music are preserved, often with subtle in-jokes: after the famous Turkey Drop scene, Johnny Fever plays It Came Out of the Sky by Creedence Clearwater Revival. Around two-thirds of the episodes are without any music edits at all. Brian Himes at Home Theatre Forum compiled a list of all the music edits in the set.

Of the music cuts, most are minor, and were done in such a way as not to affect the episode. For example, my favourite episode of the series, “Frog Story,” ends with a dialogue scene over Randy Newman’s cover of the song Goin’ Home Train, which could not be licensed for this set. But Shout! substituted a cover version of the same song, and managed to insert it into the scene without changing the dialogue (not always easy, because this show didn’t usually have separate tracks for music and dialogue). So the scene plays pretty much exactly the same, without the kind of butchering of scenes and dialogue that plagued the 2007 DVD.

There are a very few episodes adversely affected by the music changes. The ending of “Patter of Little Feet” loses its punchline without Thank Heaven For Little Girls from Gigi (though this change has been in every syndicated version since the ’80s, and the original track may not even be available). Pink Floyd refuses to license out its songs, so Dogs had to be replaced in a famous scene from “Turkeys Away” — though Shout! did manage to keep most of the dialogue instead of just cutting it all, as Fox did. And the ending of “The Doctor’s Daughter” depends on Johnny Fever playing the Eagles, only the Eagles weren’t available, requiring not only a replacement song but a voice redub. But I wouldn’t say there are many more episodes than these that are really hurt by music edits. In the bigger picture, there are hundreds of songs here, and the feel that Wilson wanted — of a fake radio station that plays real music — is restored.

Just as important as the music is having the episodes uncut. For many years, the rights holders made about one-fourth of the episodes available only in severely cut syndicated versions, meaning that even if a channel wanted to show WKRP without cuts, it couldn’t. Shout! Factory managed to find full, broadcast-length masters for the episodes. They run 24 to 25 minutes, and you’ll see scenes in every episode— many of them very funny or important to the plot — that you didn’t see in syndication or bootlegs. Johnny testing the chalk on the basepaths in “Baseball” to see if it’s drugs; Jennifer’s drunk scene in “Baby, It’s Cold Inside,” Bailey’s fantasy of being president of the United States in “Daydreams” — all these scenes and many others are back for the first time in many, many years, and the episodes are much improved when you see them uncut: “A Date With Jennifer,” released at 21 minutes on the Fox DVD, is a much better and funnier episode when you see it at 25 minutes and hear all the jokes the other version chopped out.

Many people collect WKRP in off-air bootleg versions, but while the bootlegs and torrents may have a few pieces of music this set doesn’t (though not many), those episodes are heavily cut for time, which hurts many episodes much worse than music changes. To get the full-length episodes, you’ll have to get this set.

Well, it’s a videotaped show, so it’s never going to look much better or worse than it did originally. A few of the episodes, like “Goodbye Johnny” and “Johnny Comes Back,” have always looked a little dark ever since their original broadcast. Suffice it to say that the masters used here look pretty much the way the show is supposed to look, and the mono soundtrack sounds the way it’s supposed to sound.

There are always things that could be better, with any set. Shout! managed to eliminate most of the bad voice redubbings that plagued the ’90s syndicated version, but there are a couple of episodes that have them; one of them is the first episode of the second season,  which starts the season off on kind of a bad note. It’s too bad the actors couldn’t have dubbed their own voices.

And in their quest to use original broadcast masters for every episode, Shout! wound up making a very unusual discovery: the ending of the episode “The Contest Nobody Could Win” is an earlier version with a different guest actor. Nobody knew two complete versions of the episode existed, so I can’t blame Shout! for not realizing they were using a different version from the one we’ve normally seen in reruns. And hopefully they’ll find some way to make the other version available too, maybe via a replacement disc or a fix when they release the seasons separately. But meanwhile, the usual ending is on Fox’s DVD set, and the two versions make for a fascinating comparison. It just goes to show you how difficult this show is to keep track of and how many alternate versions it exists in: in all my years of watching TV, I’ve never heard of a non-pilot episode existing in two different, authorized masters with completely different endings and actors.

This is, then, about as good a version of WKRP in Cincinnati as we could hope for, considering how difficult this show is to restore: made at a time when nobody paid much attention to music licensing, every single song snippet had to be re-licensed and renegotiated, and the DVD producer had to track down uncut versions of episodes that haven’t been seen uncut in a generation. Though a few episodes are harmed, the vast majority of them are presented here in their original broadcast form or something very close to it.  No matter where you’ve watched the show before — in syndication, on the Fox DVD — this set will give you scenes or songs you haven’t encountered before. Simply put, if you get Shout! Factory’s WKRP in Cincinnati, you’ll be watching a better show than any version you may see on TV, or on other authorized or unauthorized releases. If you’re a sitcom fan, a ’70s nostalgia buff, a music lover or a fan of these actors — in other words, a WKRP in Cincinnati fan — you need this set.