The artist behind Calgary's portrait fiasco has a $200,000 piece coming to Ottawa

Derek Besant's unauthorized use of British images isn't scaring off officials in the nation's capital. But they have conditions. 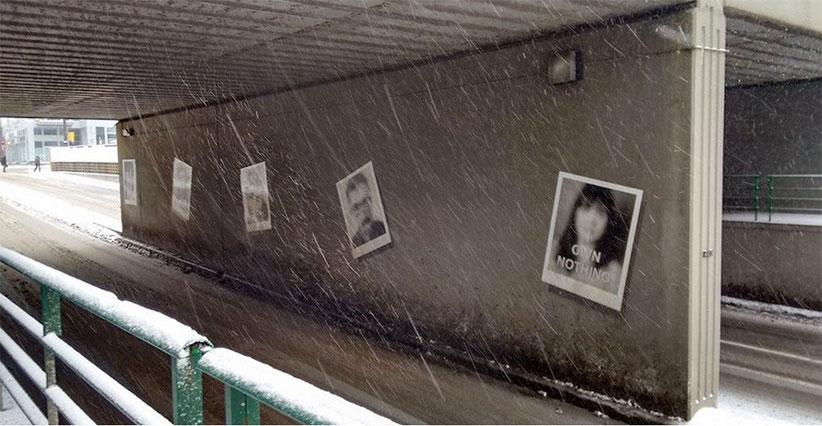 While Derek Besant has become known on two continents for his trans-Atlantic photographic pilfering, the Calgary-based public artist had built a long career before the scandal on the motif of text displayed over large, blurred portrait photographs like the ones that will soon be removed from downtown Calgary underpass abutments.

His use of out-of-focus photos in black and white goes back to at least 2000 and an exhibit called Sleepless Nights that showed in Buenos Aires. In 2005, Besant’s Amnesia series was a London gallery piece again dominated by hazy human visages. The year 2015 was a busy one for Besant’s cloudy portraiture:  the images appeared with typed text over them in Belgrade, and scrawled text superimposed in Edinburgh. In Calgary, brief block-text phrases were shown atop 20 blown-up photographs

The Calgary exhibit won’t be up for long: city staff plan to peel the images off the wall at the now-apologetic artist’s behest. Though Besant had claimed the work was meant to represented passersby in the underpass, the images were actually those of British actors and comedians he’d lifted from 2015 Edinburgh Fringe festival promotional material. The photographers and comedians learned of this unauthorized borrowing only this week, when a friend of comedian Bisha Ali told her that a seven-foot version of her head shot was on display in Calgary, a city Ali has never visited.

And yet, Besant’s blurred period will live on. As his $20,000 Calgary public art project comes down, a $200,000 installation in Ottawa will go up next year.

These are the 12 headshots we've identified (so far). pic.twitter.com/gGruDjQXEO

Besant, a lauded international public art creator—Torontonians will recognize his Flatiron Mural on Front Street—was named this summer as one of many commissioned artists whose work will adorn Ottawa’s new light rail transit line, which opens next year. He’s one of two artists to be featured at the University of Ottawa station. Besant’s project will, and stop me if this sounds familiar, present portraits that evoke the strangers who pass through the university platform’s underground concourse—“purposefully taken out-of-focus so they ‘remind’ us of people we might know but who remain elusive,” states the artist’s statement on the City of Ottawa website. In this case, a single French or English word will appear over the faces: “The artwork becomes a mirror of the various people who use the site and invites possibilities of interpretations of what people are thinking behind their faces when they look at you.”

Of course, Ottawa’s public art jury and its civic officials had vetted Besant before his similar concept work was brought to shame in Calgary. The call to artists for these opportunities first went out in 2012, before the Calgary installation went up. Presented with this controversy, though, Ottawa is standing by their choice of artist—albeit with new conditions attached to his work.

RELATED: Art that engages, fantasizes, and tries to go deep

“The City of Ottawa has recently been made aware of the recent news with regards to public artist Derek Besant,” said a statement from Dan Chenier, general manager for  recreation, cultural and facility services. “City of Ottawa staff are working with the artist to ensure that all individuals appearing in artwork for the Ottawa LRT line will have signed a photo release authorization, and that the photos will be taken by the artist himself.”

In other words, this time Besant will have to take the photos himself. And the subjects will have to approve of their use, which includes knowing their photos will be on LRT station walls.

While the $200,000 commission is 10 times the size of what his public art cost in Calgary, he wouldn’t get all the money himself. According to the call to artists from 2012, the commissions ranged from $200,000 to $750,000, and “artist fees will range from $25,000 to $75,000 CAD depending on the complexity of the project and related design time required to develop the artwork.” Other costs would go into photographic materials, installation of the likely giant pieces, and other capital costs. Vancouver’s Douglas Coupland, perhaps Canada’s most prominent public artist, is getting a $595,000 commission as part of the $7 million worth of art spanning the new transit line.

Great to see so much interest in new public art by Derek Besant at the 4 Street Underpass. #yycarts #yyc pic.twitter.com/nDh6bljTMh

Nearly 48 hours after Bisha Ali first tweeted with alarm about Besant’s ethically dubious art borrowing, Besant himself has broken his silence and given an apology of sorts. In an email to artists and journalists, he says he had intended all along that his Calgary underpass project represent “strangers that could be from anywhere, in any city.” The Edinburgh images, in his view at the time, were fair ball, creatively and legally. “When I received some torn-out pages from a handout flyer with these faces, my impression was they were already out in the public domain,” he writes.

RELATED: 99 stupid things the government spent your money on (IV)

“Therefore, I thought they could be collaged as backgrounds to be further interrupted with text elements for the 4th Street community art-site concept.” It was a curious interpretation of public domain, especially for one proferred by a man who from 1977 to this past August had taught budding artists at the Alberta College of Art and Design.

Besant wants “to apologize to all concerned,” declaring: “In no way did I ever mean to hurt anyone involved, and I am extremely sorry that this is the result of my misunderstanding.”

The City of Ottawa has proven forgiving of Besant’s bad judgment in another city. But for the $200,000 project he’s doing in the nation’s capital, borrowing art from a Fringe Festival flyer will not cut it.