The best thing about 'The Queen’s Gambit'? There’s no sexual violence in it. 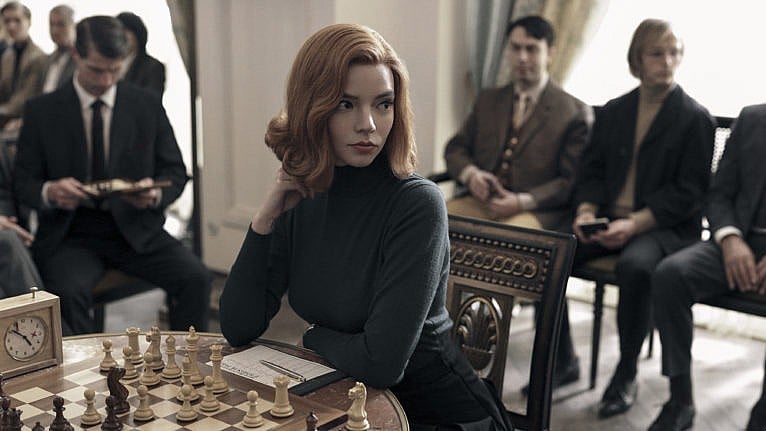 About fifteen minutes into the first episode of The Queen’s Gambit—the wildly popular Netflix series about the ascent of a prodigy through the world of 1960s competitive chess—eight-year old Beth Harmon opens the door to the basement in the orphanage where she lives, and disappears down the stairs.

The scene is pivotal to the series: it is in this basement that the orphanage janitor, Mr. Shaibel, practices his chess game, and it’s where Beth will eventually convince him to teach her to play, as well. But the tension in the scene comes from another place altogether. Recently orphaned and brought to the Methuen Home to live, Beth is young, alone, and vulnerable—and we all know what happens to girls in dark basements. Don’t we?

I watched all seven episodes of The Queen’s Gambit over two days. I inhaled it, really, as much for its lush vintage styling as for its spare and precise dialogue and compelling performances. But weeks later, there’s one thought that I keep coming back to.

The best thing about The Queen’s Gambit is there’s no rape in it. I kept waiting for it, but there was no sexual assault: not in the orphanage, not in the male-dominated world of chess. It is a rape-free story about a woman succeeding. (If you were looking for a spoiler alert here—that is, if saying “there’s no rape in the Competitive Chess TV Drama” feels like a spoiler—then that’s exactly my point.)

When I tweeted this thought recently, the reaction online was overwhelming. Many viewers—okay, mostly women—watched with the same internal tension that I had. “I was so worried,” they replied in tweet after tweet, “the moment she started going down those stairs to the janitor’s office.” If there’s a vulnerable girl onscreen, we are conditioned, it seems, to anticipate violence.

It’s not only the CSI genre that capitalizes on sexual assault as an easy plot-turning device. The habit is so common that, in 2018, U.K. writer Bridget Lawless launched the Staunch Prize,  a book award meant to honour thrillers in which “no woman is beaten, stalked, sexually exploited, raped or murdered.” A BAFTA voter, Lawless created the prize in response to the high number of films in contention that used violence against women as narrative aid. Recent winners of the Staunch Prize include British writer Samantha Harvey and American crime luminary Attica Locke. 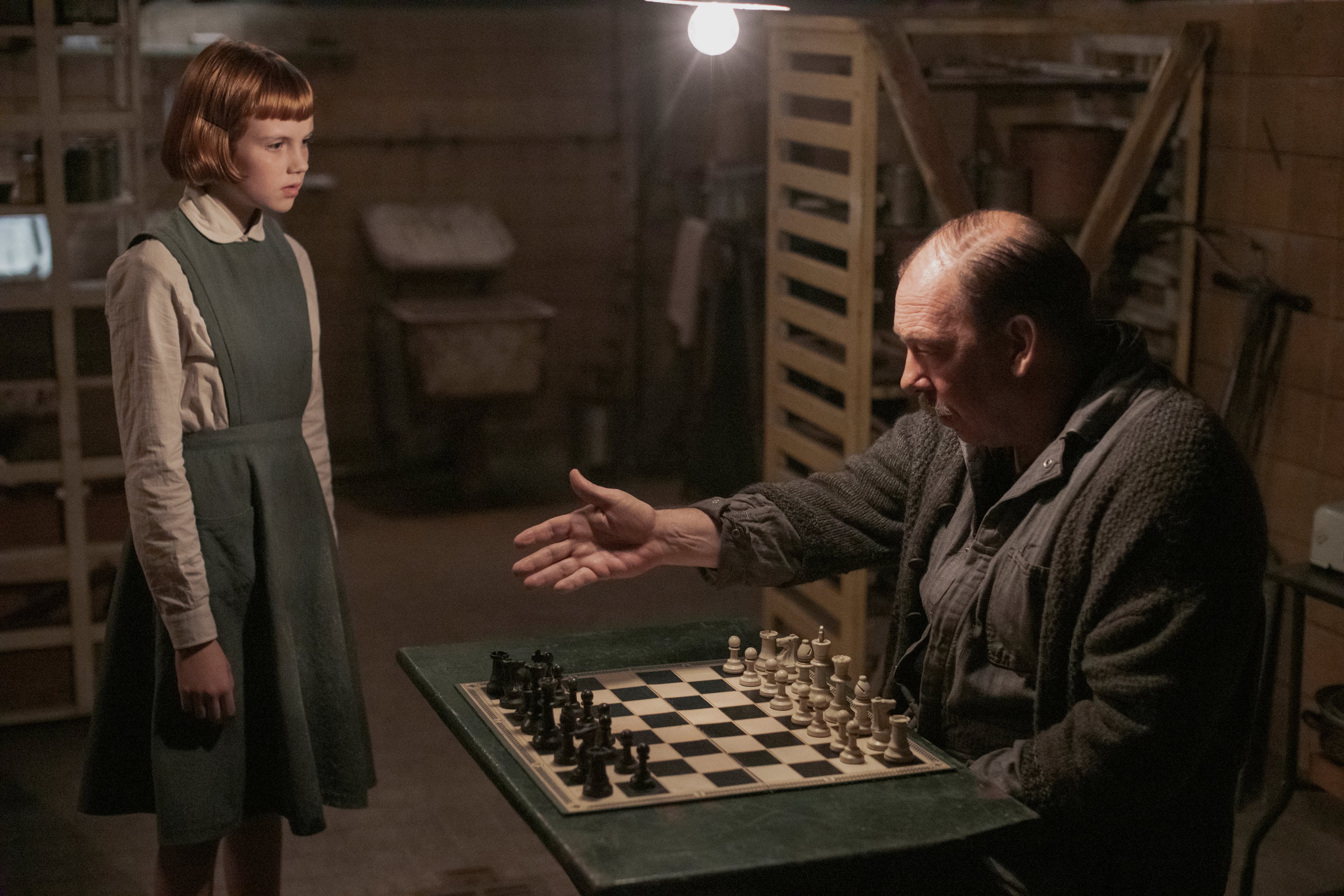 Isla Johnston as Beth and Bill Camp as Mr. Shaibel in The Queen’s Gambit. (Phil Bray/Netflix)

As a writer, I think about the “woman in peril” question a lot—and as a writer of thrillers in particular, a genre in which the trope is pervasive, I often find myself trying to walk a line. I admit I don’t create violence-free worlds for my own female characters, and I’ve questioned the impetus to do so. While I certainly understand Lawless’s point of view, I am still not sure I can embrace it. I’ve questioned the Staunch Prize from its inception. Isn’t it ultimately damaging to negate this most real and prevalent part of women’s lives? Why pretend?

I’m not alone in this. Crime novelist Val McDermid was one of several writers who spoke out against the prize in the Guardian, commenting,“As long as men commit appalling acts of misogyny and violence against women, I will write about it so that it does not go unnoticed.”

And yet it was fascinating to see how the absence of sexual violence shaped The Queen’s Gambit. Beth Harmon, the prodigy, still faces myriad challenges: orphaned at eight when her mother commits suicide, Beth is startlingly alone; she battles both a lifelong addiction and the basic misogyny of the time, both in and out of the world of chess. That basic misogyny is important. Men in The Queen’s Gambit are always standing around in groups, passing judgment: from the cops who attend the car crash where Beth is orphaned, to the boys at the high school chess club, to the men looming over her as she plays in her first big State tournament. It’s a strong, repeated image.

But these men are dismissive, rather than overtly threatening. What we see in The Queen’s Gambit is by no means a non-sexist utopia, but the series does remove this one piece of the puzzle—just the sexual assault, just the physical-safety question—and it allows us to see what this shift means for characters on both sides of the equation.

READ: Let’s finally call ‘violence against women’ what it really is

Beth has sex, but not rape. Most of the sex she has is lacklustre, and sometimes even disappointing—but it is never forced. To Bridget Lawless’ point, we are used to seeing sexual violence as a plot device, or young women’s virginity as fetish. Sex, in the movies, can be porny or rapey, but we almost never get to see women have sex that is just… meh. Beth’s first time, with a pothead college student, is so realistically bad as to make you cringe. Moreover, the portrayal is so rare it felt practically groundbreaking.

There’s another effect of the omission of sexual violence as a stake-raising plot point: it allows for more complex male characters. There are lots of good men in Beth’s story, men who become supportive father- and brother-figures to her in some way. But even the bad men made me lean in and watch closer, rather than turn away, as I usually might, with a growing and familiar pit in my stomach.

In one episode, as a teenaged Beth drives off with her new adoptive parents, we see the husband, Mr. Wheatley, eye her in the rear-view mirror. It’s a brief moment, but it creates the same tension as those basement stairs: we are afraid for Beth, for the terrible possibility of what is to come in her new home. But Mr. Wheatley turns out to be much more interesting than your dime-store creepy dad. He’s cold and selfish and insolent. Not mean, exactly; but with a potential for nuanced cruelty that hovers in the air whenever he is home, and leaves a mist of lingering consequence when he is gone. In fact, the only male character in the show who might pass for predatory is an oddly flirtatious, Old World Russian competitor—but at only 13, he is four years Beth’s junior, and his courtly manner makes him comic relief, not a villain.

As I made my way through the series, I became increasingly aware of my own anxiety. Which dude was going to be the “bad” one? I kept wondering. The answer turned out to be: none of them, and that was more than just a pleasant surprise; it felt like an immense relief.

READ: He stole their hearts. Then their money. Meet the women trying to catch him.

How much of the surprise was intentional? How manipulative is The Queen’s Gambit? The basic plot, which follows an orphaned girl from one position of vulnerability to the next, can make viewers wonder if this tension was placed specifically to play on our fears of sexual violence. I rewatched the series this week, starting from that first moment where Mr. Shaibel, the janitor, comes on screen, from where Beth opens the door and walks down those stairs—but what I found is that there is no indication at all that the janitor is a threat. If anything, Shaibel is openly hostile to Beth. It is Beth who must lure Shaibel into teaching her, not the other way around. So, then it is only the image of a girl walking down to a lonely basement that triggers our fears. It is only a girl, by herself, descending into the unknown. We can’t blame the writer for this one.

As an aside, it bears mentioning that Netflix has made no secret of its push for strong, female-driven content. Watching The Queen’s Gambit, I couldn’t help recall two other recent Netflix Originals: 2018’s Unbelievable is a superb and unflinching—if sometimes hard-to-watch—handling of the reality of sexual assault cases, based on a true story. Enola Holmes, out earlier this year, targets the YA market, and the scripted series about Sherlock Holmes’s younger sister is a bulls-eye. Never once did I worry about the safety of its protagonist, though Miss Holmes manoeuvres through environments far riskier than a chess tournament.

Years ago, I began a novel by asking myself a question: Why do we always write dystopias? Why not utopias? I ended up cheating at my own game and wrote a book about America and the psycho-pharmaceutical revolution of the 1950s; the resulting thriller, Hysteria, is a book about failed utopias.

By the end of this series, I better understood the value of writing utopia. In my own thrillers, I have often turned girls-in-peril tropes on their head, giving my women and girls agency while trying to shine a light on the impact of violence in our lives. But watching The Queen’s Gambit, I felt a new freedom. In the real world, I am not at all sure Beth Harmon would have avoided the threat of sexual assault— because in the real world, basic misogyny too often leads to violence for women. But I feel freer now to imagine a world in which the barriers a woman faces are—only—economic and familial and intellectual and the forces of basic misogyny, in which her physical safety is not threatened.

Earlier this year, I began work on a new book, coincidentally about a group of teenage girls. My goal from the outset was to make sure the girls remain the focus of the story—to make sure their interactions and complicated relationships turn the suspense plot, rather than leaning on another act of male violence. Post-Queen’s Gambit, I feel recommitted to dreaming up worlds where women can see themselves as players. When these girls open the door and step into the darkness, I want the story to be wholly their own.

Elisabeth de Mariaffi is an author and screenwriter living in St. John’s. Her next thriller, The Retreat, hits bookstores in July 2021.