Rasta values meet corporate sensibilities with the House of Marley 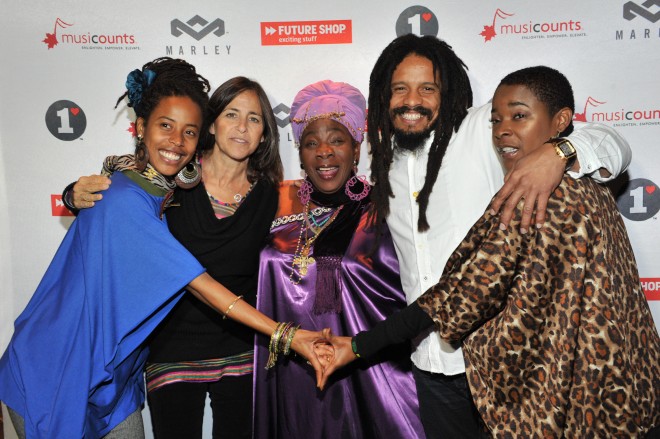 Bob Marley was a superstar and a revolutionary whose music circled the globe. Now he’s a brand. On Monday night, I attended the Canadian launch of the House of Marley’s new headphone line, a collection of eco-friendly products with names like Soul Rebel, Revolution, Conquerer, Positive Vibrations, Zion and Trenchtown Rock—which are sponsored by Future Shop. The House of Marley? Yes. It was created by the late singer’s family as a commercial enterprise to market merchandise under his name and siphon some of the revenues to charitable causes via an organization called 1Love.org.The pitch: “eco-conscious, innovative products that adhere to the Marley family core values: equality, unity authenticity.”

The launch, a bizarre mix of old time Rasta vibes and corporate chic, took place at the ultra-slick Ultra Supper Club—formerly the Bamboo, Toronto’s unofficial reggae clubhouse. And it was attended by an impressive contingent of Jamaican royalty, including Bob’s wife Rita Marley, who looked positively regal in a purple gown and turban. I was seated next to Bob’s son, Rohan Marley, the family’s official representative at the House of Marley—a dreadlocked Rasta who once  played in the Canadian Football League with the now-defunct Ottawa Rough Riders. Rohan, an exuberant pitchman and raconteur, was hilarious as he regaled us with stories of how he ended up playing ball in the Great White North. He didn’t set out to play football. It was soccer he loved. But there were no soccer scholarships, so he ended up as a star linebacker with the University of Miami Hurricanes. When he got an offer to play in the CFL, he refused at first (“I was retired from football.”) But as he tells it, Rita applied pressure: “Mama Rita, she said, ‘You really love football. You should give it another try. You should go to Canada!” Rohan reminisced about how he stoked his on-field energy with herb, how he used his energy and speed to run circles around much bigger opponents, and how he feuded with his intolerant coach.

He later found his vocation by developing a small organic coffee farm in the Blue Mountains of Jamaica. His fair-trade coffee company, which expanded with imports, became one of the House Marley’s first assets. Its slogan: Stir it Up. Individual brands carry names like Mystic Morning and Lively Up Yourself (the espresso blend).

For purists, it may be sacrilege  to see such a revered song catalogue cannibalized to create consumer labels. But Rohan pointed out that the Marley family became weary of seeing Bob’s image constantly pirated on unlicensed products. It was time for the family to own his legacy. Getting such a huge and disparate clan on board behind a single brand could not have been easy. Ziggy and Damian Marley, who have their own music careers, are not actively promoting the House of Marley, but Rohan says they are behind it.

The product launch at the Ultra Supper Club was a weird social mix. Dozens of fans lined up to be photographed with Rita. Onstage Bob’s grandchildren Daniel and Joseph Marley performed hip hop. The House of Marley’s young white Canadian executive anxiously tried to wrangle his Rasta guests. And as speeches were made, a Future Shop rep struggled to get a plug from Rohan. “Why headphones?” he asked. Rohan deflected the brazen cue like a linebacker batting down an errant pass: “It wasn’t really about headphones,” he said in Jamaican drawl that instantly conjured his dad’s voice. “What’s important to us is how we represent ourselves. We have to be  pro-active and create a movement . . .  to be eco-friendly and socially responsible. . . The music is our teaching.” (In Canada, the 1Love.org charity of choice is MusiCounts, a program to fund music in schools via the Canadian Academy of Recording Arts and Sciences.)

So at least the marketing appears to be making a sincere attempt to honour Bob’s spirit—even if he could never have imagined that ‘Stir it up’ would be used to sell a bag of coffee with his name on it.