The crusade for menstrual equity

At any given moment, about 800 million people around the world are menstruating, many in secrecy and shame. A Canadian feature-length documentary finally gives airtime to menstrual rights. 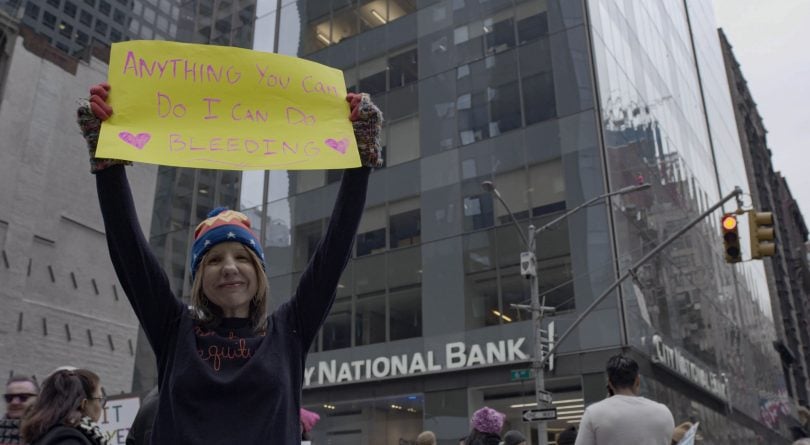 A woman holding up a sign at the New York City women's in Mar. 2019. (From the film Pandora's Box)

If it bleeds, it leads. That’s one of journalism’s most enduring truisms, an axiom born from the front page that continues to regulate our triage in a world of screens, whether we’re transfixed by the horror of a terrorist bombing or make-believe carnage in Game of Thrones. “There will be blood” is the media’s eternal promise, and taunt, challenging us not to look away. But there has always been one glaring exception, hidden in plain sight: blood’s ultimate taboo.

At any given moment, about 800-million people around the world are menstruating, many in secrecy and shame. About half of them had no knowledge of periods before their first cycle and still lack the resources to manage it. Throughout history, a natural bodily function has been stigmatized as a disease or a curse, and the taboo persists. Aside from sex itself, nothing so fundamental to human life has led half the population to be oppressed, mocked, demonized and ostracized quite so universally as menstruation. Since the 1970s, while the women’s movement tackled issues of workplace equality, abortion rights, childcare and sexual abuse, the fight for menstrual equality has been slow to emerge. The tide began to turn in 2016, when a Newsweek put a tampon on its cover under this blazing headline: “THERE WILL BE BLOOD: Get Over It.” And lately the crusade for menstrual equity has opened up a dynamic new front in gender politics.

Before going any further, a disclaimer seems in order. To be mansplaining menstrual politics, delivering my hot take on a woman’s right to bleed with dignity, feels a bit awkward to say the least. But perhaps that speaks to the heart of the problem—that the taboo around menstruation has been codified and enforced by men whose idea of sanitary hygiene has been a cone of silence. In some societies, men still consider the word “period” unmentionable. In sacred texts from the Koran to the Bible, menstruating women are deemed impure, and patriarchs in orthodox iterations of Islam, Judaism, Hinduism and Christianity, have enforced doctrines of shunning and segregating women during their period.

MORE: The face of women in the age of Donald Trump

Though Western secular culture shows more tolerance, the stigma of menstruation still runs deep. Even in the post-feminist era, “she must be having her period” remained an all-purpose punchline, from the locker room to the board room. In his 2015 U.S. presidential campaign, Donald Trump attacked Fox News anchor Megyn Kelly by saying “you could see there was blood coming out of her eyes, blood coming out of wherever.” With dog whistles like that, it’s no wonder the movement for menstrual justice went viral. By 2017, with Kelly joining the chorus of Fox News women accusing Rogers Ailes of sexual harassment, the issue of menstrual equity had entered the slipstream of the nascent #MeToo movement.

What brought me to the subject, as someone who writes about film, is a ground-breaking Canadian movie called Pandora’s Box. Making its world premiere this week at the Whistler Film Festival, this appears to be the first feature-length documentary ever devoted to the issue of menstrual rights. “With the #MeToo movement and the gender equity movement, it has to be part of that conversation,” says the film’s executive-producer, Carinne Chambers-Saini.

Filmed in North America, Britain, India and sub-Saharan Africa, it tells heartbreaking stories of women whose rights to personal hygiene have been cruelly violated, from American prison inmates who are routinely deprived of sanitary pads to a Kenyan mother who got her period at 12, dropped out of school because couldn’t handle the shame, and sold her body to a shopkeeper in exchange for sanitary napkins. In India, the film explores the frustration of women prohibited by conservative Hindus from entering the temple or the kitchen during their period. But it also charts the bracing energy of the menstrual equity movement, from activists mobilizing women in Nairobi and Mumbai, to those in the West campaigning to lift taxes on sanitary products and make them freely available in schools and prisons.

MORE: ‘How we treat women’

Written and directed by Canadian filmmaker Rebecca Snow, Pandora’s Box presents compelling evidence that “epidemic period poverty” is a pressing issue not just in prisons and developing countries, but for struggling working-class families in the West. One jarring statistic after another is slashed across a blood-red graphic backdrop. “The average person who menstruates has roughly 450 periods. That’s 2,500 days (seven years) of bleeding,” costing over $8,000 on products such as tampons and pads. Note the use of the word “person” rather than “woman.” As the movement for menstrual equity intersects with gender politics, it’s no longer strictly a women’s issue: not all those who menstruate identify as female, and there are transsexuals who still bleed.

The issue also intersects with environmental politics. Over 20 billion menstrual pads are dumped into North American landfills every year. Concern about that, along with a desire for non-toxic sanitary hygiene, has led to the advance of the menstrual cup, a reusable medical-grade silicone device. The cup was originally invented in the 1930s, but as a young entrepreneur Carinne Chambers-Saini salvaged the concept from obscurity to develop a modern version branded the DivaCup. She worked with her mother, Francine, who had been dreaming of the concept since she was 13, and now the DivaCup is the top-selling personal care product on Amazon.com. As CEO of Diva International, Chambers-Saini is also the executive-producer behind Pandora’s Box, a $one-million production that was mostly financed by her company.

In a country where most documentaries are made with a jigsaw of public funding, a corporate film sounds suspect. But Chambers-Saini insists, credibly, that Pandora’s Box is not a promotional film. “I was adamant about that from the beginning,” says Snow, who was hired to write and direct it.

The cup can be a tough sell in developing countries, for cultural and logistical reasons. And the film puts more focus on the introduction of reusable pads, in particular those manufactured by a spirited group of women in a Nairobi enterprise called Days for Girls, which is run by the very same Kenyan mother who once prostituted herself as a teenager to obtain sanitary products. Her group created a novel solution to deal with the social stigma of a menstruation. With bright floral patterns, their pads can be easily camouflaged on a clothesline as washcloths.

In 2015, hip hop artist and former M.I.A. drummer Kiran Ghandi made waves by choosing to run the London Marathon “bleeding freely,” a decision she made on the starting line, as her period began. At the 2016 Emmys, when asked who she was wearing on the red carpet, Amy Schumer identified her dress and the brand of her tampon. And amid the sad stories of injustice, Pandora’s Box finds some comic relief in sending up superstitions, including a belief in India that a woman on her period must not be allowed to touch a pickle. “The stigma around the subject in some places is so silly,” says Snow. “We wanted to play with the cheekiness a bit—hence the title Pandora’s Box.”

With protest placards that read “talk to me when you dick bleeds once a month,” and t-shirts boasting “anything you can do I can do bleeding,” menstruation has gone from being the butt of jokes to a wellspring of woke wit. A sure sign that an issue has gained traction is when it’s discovered by Hollywood. And at last February’s Oscars, one of liveliest moments came when Best Documentary Short went to Period. End of Sentence, the uplifting story of a village in India where women build a cottage industry manufacturing and distributing inexpensive sanitary pads. Overcome by emotion as she accepted the award, the film’s co-director, Melissa Berton, yelled out, “I’m not crying because I’m on my period! I can’t believe a film about menstruation just won an Oscar!”  In that fleeting moment, a once unspeakable taboo melted in the spotlight.