TV shows and movies that tap into rock ’n’ roll nostalgia used to be a sure thing. Not any more. 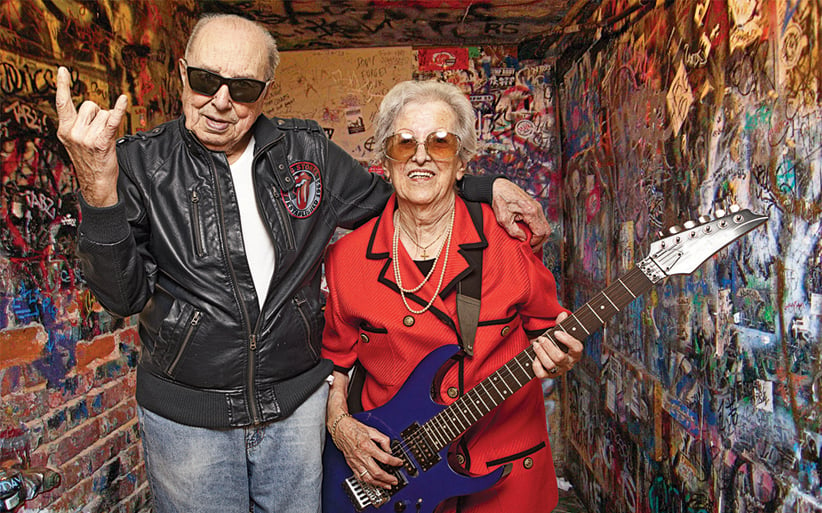 Rock ’n’ roll will never die, but rock ’n’ roll nostalgia might. Even though this musical style has had its ups and downs on the pop charts, the entertainment industry has built its own mini-industry of TV shows, movies and documentaries about the greatness of rock and its importance in cultural history. In some years, this sub-industry has been more healthy than rock music itself. But in 2016, several high-profile failures have raised the question of whether that kind of story works now. Could the rock story go the way of the Bing Crosby movie—a charming relic of an old form of music?

Not that people have stopped making these rock tributes—at least, not yet. Every major rock anniversary is commemorated, particularly anything to do with the Beatles: the Market Gallery in Toronto currently has an exhibit about the 50th anniversary of the Beatles’ last concert in Toronto. Some rock stars can make news for whatever they say or do, like Bruce Springsteen, who is getting wall-to-wall coverage and respectful reviews for his new memoir, Born to Run. And the rockumentary, about the rise and fall of real-life bands, continues to be made: on Oct. 27, Oasis will be the latest group to be enshrined, in the documentary Supersonic, which is already leading to rumours of a reunion.

But 2016 has also been full of warning signs that the market for rock ’n’ roll sentimentality isn’t what it used to be. Earlier this year, two of the biggest cable producers launched major TV series about the world of rock from Baby Boomer creators with impressive credentials: HBO’s Vinyl was co-created by Martin Scorsese and Mick Jagger, and told the story of the rock industry in the 1970s, while Cameron Crowe (Almost Famous) continued his career-long rock obsession by giving us Showtime’s Roadies. Both shows received mostly negative reviews, and were cancelled after only one season.

They weren’t even the only high-profile rock failures. In September, FX announced it was cancelling its Denis Leary comedy Sex&Drugs&Rock&Roll, with Leary as a washed-up ’90s rock star. The state of rock on TV is so bad that a show about classical music, Mozart in the Jungle, is running longer than the rock shows. Movies haven’t picked up the slack either: films like High Fidelity helped keep the form going in the previous decade, but there have been few rock-based films in recent years.

Rock can’t even find a secure home in media that are decades behind the times when it comes to music. Broadway had a long run of jukebox musicals that reintroduced audiences to rock catalogues, from Frankie Valli and the Four Seasons in Jersey Boys to modern punk in Green Day’s American Idiot. But these musicals haven’t been as hot lately, and film adaptations, like the one of the ’80s hair metal musical Rock of Ages, didn’t do well. 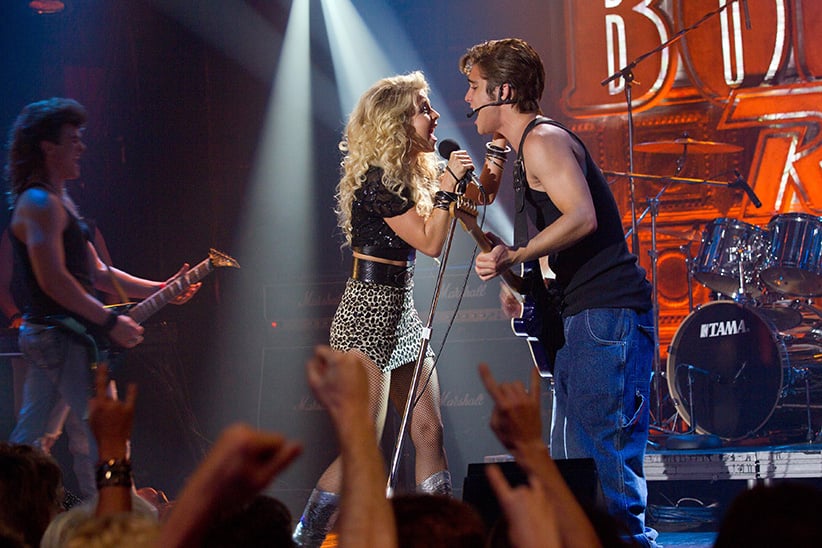 Why is there less of an appetite for stories about rock? Some of it may be that these stories are so familiar that they can seem hackneyed if the creator isn’t careful. “The tricky thing is trying to differentiate one from the next,” says Mat Whitecross, director of Supersonic. “That trajectory, the first two or three years in the band’s life, tend to be kind of similar. You start out with nothing, you don’t know how you’re going to make it, you gig and you gig, then you get lucky.”

There’s also a generation gap, just like the gap between the rock-loving Baby Boomers and their parents. It’s well known and mostly accepted that rock doesn’t appeal as much to the young as it used to. Wayne Reeves, chief curator for Toronto’s Museums and Heritage Services, says that of the people who come to the Beatles exhibit, “The bulk are adults. We would love to be seeing a lot more youth in the exhibit.” But kids don’t have much power to shape what gets seen in TV and movies, while there are a lot of powerful Baby Boomers who do. This year we heard not just from Scorsese and Crowe, but Ron Howard, whose new documentary about the Beatles is called Eight Days a Week.

This caused some critics to point to shows like Vinyl as an example of Boomer self-indulgence. The Guardian celebrated the failure of this year’s rock TV with an article calling out the creators as unable to move beyond the music of their youth, calling them “the televisual equivalent of a self-indulgent prog-rock guitar solo.”

Scratch an underperforming rock story and you’ll often find a middle-aged man who really who really wanted to make it. Vinyl was described by Newsweek as “a passion project” of HBO’s president of programming Michael Lombardo, who had been with the network for 33 years. Another middle-aged HBO mainstay, The Sopranos creator David Chase, made his poorly received movie directing debut with Not Fade Away, a film about a rock band in the 1960s. People with the clout to get these projects made may be too quick to assume that everyone cares about rock as much as they do. “You can’t really take for granted that even a band as big as the Beatles is a band that everyone will be familiar with,” says Whitecross, “Because people tend to live in the present.”

There may be political implications to the backlash against rock stories. Rock fandom is often described as leaning white and male, and this sometimes causes it to be portrayed as establishment music. Even the history of rock fandom is constantly being re-evaluated, sometimes negatively. This summer, disc jockey Steve Dahl published a book called Disco Demolition: The Night Disco Died, about the famous pro-rock, anti-disco demonstration he helped to sponsor in Chicago in 1979. But attitudes to the breaking of disco records had changed in the interim: once mostly portrayed as anti-establishment rebellion, the event is now often perceived as a straight white backlash against a more diverse musical style. “I’m worn out from defending myself as a racist homophobe for fronting Disco Demolition,” Dahl wrote.

The idea of rock as the music of reaction doesn’t make it bad, but it does make it harder to think of it as the sound of youth in revolt. This December, there will be celebrations of the 40th anniversary of the famous profanity-laced Sex Pistols interview that helped start the punk rock movement, and that’s the way older creators like to think of the genre. But a recent article in The Atlantic compared Donald Trump, only semi-ironically, to punk rock: “Trumpism—like fascism, like a certain kind of smash-it-up punk rock—begins in apprehensions of apocalypse.” Actual punk rockers were not amused by the comparison, but it did point to a problem: while there are many young people creating rock, its image is old-fashioned.

That doesn’t mean rock ’n’ roll nostalgia is doomed. For one thing, there are plenty of nostalgic fans out there, more than enough to make a rock project popular if it catches on. “This is the very first time that we’ve charged admission for an exhibition,” Reeves says of the Beatles exhibit. “We’re pulling in numbers that are on parallel with the previous free exhibitions.” Rock still has the power to bring generations together, he adds, with parents transmitting their fandom to their children. “It’s been wonderful to see adults bring their kids.”

But rock bands may not be as central to those kids’ music tastes as they were to their parents’, and that means music stories have to find ways of appealing even to people who aren’t into the music. Whitecross explains that he’s trying to treat Supersonic as a story “about two warring brothers who grew up on the wrong side of the tracks and never dreamed they’d be in a band together. The one who hated music was the one who started the band. I think the story is universal. If you like the music, then it’s a bonus.”

Rock filmmakers may also need to accept that there are genres out there that are just as popular as rock. One of the few music-related TV shows to be well received this year was Baz Luhrmann’s Netflix show The Get Down, which takes place in the late 1970s and features nostalgia for all the musical forms of the period—including disco, the form that rock was once supposed to demolish. “Luhrmann picked a subject that hasn’t yet been mined to death by film and TV,” the Los Angeles Times’ Lorraine Ali wrote. “Rock biopics have told the story of everyone from Jerry Lee Lewis to Joy Division, but hip-hop has been less explored.” The hottest Broadway show in recent memory is the original hip-hop musical Hamilton, and even jukebox musicals are starting to embrace a wider variety of sounds. The life of Nigerian Afrobeat legend Fela Kuti was celebrated in 2009’s Tony-winning Fela!, and November’s On Your Feet! will be built around the dance-pop songs of Gloria Estefan.

What we might see in the future, then, is music storytelling that treats rock as just one of many musical options, no more or less valid than any other. There will be fewer shows and movies specifically about how rock changed the world—because the world has changed once more. “Today we’re so much more fragmented in the way we consume music,” Reeves says. “It’s hard to ever expect to have that phenomenon again.” Still, if a more fragmented audience gives us fewer shows like Vinyl, it may all be worth it.