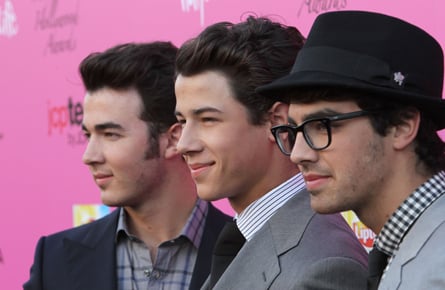 Perfection is an angsty state of being, and so the Jonas Brothers, Kevin, Joe and Nick, are always busy trying to sound fun and upbeat. It’s a bit of a contortion.

“Hey guys,” began a reporter from Omaha on a recent conference call with Les Frères Jonas, “I have two brothers and I know when we were kids and stuff—teenagers, even—we would fight a lot, stuff like that. How do you guys, being stuck on buses and planes for months at a time, kind of get along?”

“I think we kind of got past that once we realized it was very unproductive and nothing really got done when we were fighting,” one of the brothers replied. “And so I think that we choose to have respect for each other, not only for our time that we’ve worked together, but also just as brothers. And I think that’s important.”

The call, in support of the power-pop trio’s world tour this summer (which includes several stops in Canada), as well as the Disney Channel made-for-TV Jonas vehicle, Camp Rock 2: The Final Jam film, which airs in September, and the group’s ongoing Disney series, JONAS, revealed several such instances of forced bonhomie and gritted-teeth determination.

“This question is actually for Joe,” asked a hapless 24 Hours Vancouver reporter, “I was just wondering, since you and Demi are now publicly dating, how do you think that this tour will be different for you touring with your girlfriend?”

The query, a reasonable one, referred to Joe’s squeeze and Camp Rock co-star, Demi Lovato, 17. “I think we’d like to stick to questions about the music or the touring please,” said Joe, with a studied, schoolmarmish tut-tut tone.

His brother Kevin, who married wife Danielle Deleasa last year, was happy to open up. “This will be the first time I’ve toured as a married man, so it should be a little bit different,” he said. “It’s very exciting, it’s new, and we don’t know exactly what the accommodations are going to be—if we’re going to have our own bus, all that stuff.”

Indeed, the lads are growing up (the youngest, Nick, is 17, the oldest, Kevin, 22)—another source of concern for a group whose appeal is mainly focused in the tween set.

“I don’t want to offend you guys,” asked a Pennsylvania reporter sheepishly, “but do you guys think at all about the rising young stars who are coming behind you—like Justin Bieber? I mean, he’s been getting a lot of attention.”

Sure, the Stratford, Ont., kid and pop star du jour, has come up, the brothers confess.

“It’s not offensive at all,” says one Jonas (does it really matter which one?). “It’s definitely something we think about. But I think with all of the younger people that are coming up, we wish the best for them, and Justin Bieber in particular. We’ve had the opportunity to meet him a couple of times and speak with him and he’s entering into a whole new world and really being thrown into it all and we hope the best for him, we think he’s doing a great job so far.”

Before shows, the bros enjoy eating protein bars, drinking Red Bull, and sampling the tables of catering laid out back stage. Pre-show rituals for the boys, Evangelical Christians who swore off pre-marital sex, include vocal warm ups, playing video games and a large group prayer, including “everyone that’s about to go on stage,” followed by a group chant of, “Living the dream, baby, living the dream!!!”

Can they hear themselves above all that girlish screaming, asked that reporter from Omaha, “because being an audience member, sometimes it’s a little difficult.” Sure, said Joe: “We speak a little bit louder probably because we’ve lost a little hearing over these few years,” but he added they wear in-ear monitors, though “I honestly don’t really like to use them that much because I like to hear the audience as much as I can because it kind of gives me an energy that’s exciting for me.”

And so, what are they doing to prepare for the future? They have a few collaborations in mind. Paul McCartney would be amazing. Someone like Bono or U2.

Actually, Bono’s given them some advice for how the group can grow old with their fans, Joe Jonas said: “Since he’s pretty much been doing this for a very long time and very successful, he just told me, continue to do what we’re doing—you’re seeing that it’s working. I think when you are just true to who you are and your music and you’re honest with your lyrics, your age group will grow up with you but also a new set of ears will listen also.”