The lung debate over authentic haggis in Canada

A Scottish company will sub out certain ingredients to get around Canadian import restrictions. But to purists on this side of the pond, that's just not haggis. 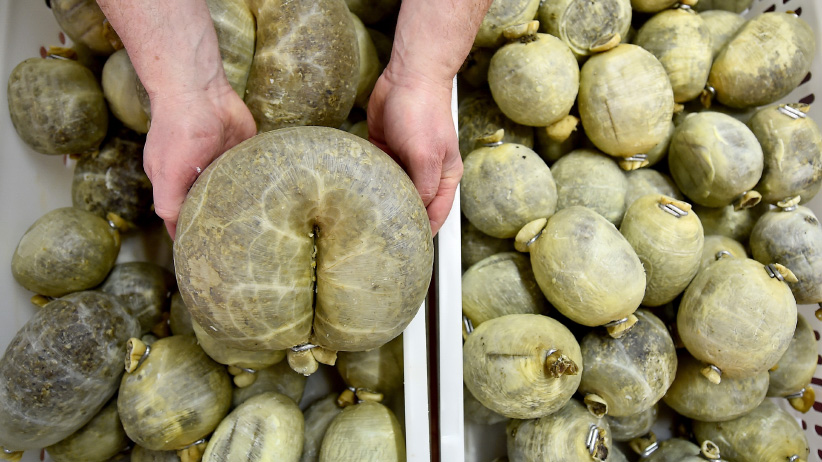 Paul Bradshaw eats haggis for breakfast. On most mornings, the Toronto butcher, known for his talent concocting the traditional Scottish dish, will crack an egg or two over the top of his haggis as it fries in a pan. If he eats enough, he won’t be hungry for the rest of the day. While some ﬁnd haggis—a minced blend of lamb kidneys, liver, hearts and lungs mixed with steel-cut oats, spices, herbs and onions then stuffed inside a lamb’s stomach and poached for three hours—unusual or even stomach-churning, Bradshaw views it as a country-style pâté that smells like sausage and is rich in heritage.

He started out as a butcher at 14. Bradshaw’s family on his mother’s side hails from Scotland and he spent summers there visiting relatives. As a teenager, he tried endlessly to make traditional haggis but struggled to get it right. The process of boiling, cleaning and grinding the lamb organs (or offal) and adding the oats and seasonings before inserting it into the animal’s stomach and boiling it one last time can take about 12 hours. Finally, at 19, Bradshaw embarked on a quest to conquer the dish. He met legendary haggis-maker Michael Dorward in the town of Alyth, Scotland, where he spent two weeks learning the craft. “When I came back home I replicated that recipe and played around with it for a few months until it was perfect,” he says. Bradshaw, who was considered a “haggis master” by his former employer, the Healthy Butcher, stands by the dish’s traditional ingredients.

Traditional haggis, Bradshaw says, has always been made in Canada. So when the Scottish haggis-maker Macsween of Edinburgh announced it would be exporting its product to Canada—using a recipe reﬁned to abide by Canadian food regulations—he wasn’t impressed. It will be the ﬁrst time in 46 years the iconic dish will be distributed from Scotland, but it will be missing one key ingredient: lung. Under Canadian regulations, animal lungs can’t be imported for consumption and are placed in the same category as genitals, udders, spleens, “black gut” (pig intestine) or any other portion of an animal that is not commonly sold as food. The new version from Macsween will use more traditional lamb hearts instead of lungs, allowing the company to expand to the Canadian market. “Macsween isn’t exporting haggis to Canada,” Bradshaw declares. “They’re exporting haggis-flavoured lamb sausage.”

Canada’s import rules mirror those in the U.S., which bans not only the importation of animal lungs but the selling and eating of them, too. Given the number of Canadians of Scottish descent—now close to the population of Scotland itself—exports to this country are a priority for the Scottish government. It reports that food and drink sales to Canada are worth more than $150 million to Scotland’s economy, and Macsween appears eager to get in on the action, saying the new haggis is “as close as we can get to the original recipe using different meats.” Still, Bradshaw believes that tinkering with the age-old formula comes at the cost of the food’s Scottish lore—a dish that “used up everything that was left over from killing a sheep or a lamb,” he says. “By leaving out the lungs, you can still hit the flavour proﬁle, but it’s just not a traditional haggis.”

For Steve Allen, owner of Allen’s Scottish Butchers in Toronto, haggis without lung is haggis without texture. “People would know,” he says. “The lung adds body and flufﬁness to the product.” Allen has been making haggis with lung for more than 40 years since immigrating with his family from Liverpool when he was 10. His father opened the butcher shop with Scottish partners in 1964 and they kept the Scottish moniker. He stands by his haggis and has no plans to try the new Macsween recipe when it’s stocked in Canadian grocery stores. “It doesn’t bother me,” Allen says. “I’d put my product up against anybody’s anywhere in the world.”

Haggis is synonymous with Burns Night, a celebration every Jan. 25 that honours the life of Scottish poet Robert Burns. It’s considered the true Scottish holiday, and centres around one dish: haggis. The festivities typically consist of Scottish highland dancers, bagpipers and men dressed in kilts. When supper arrives, bagpipers march in front of the haggis, playing their pipes as it’s walked into the dining room. On the table, the haggis is addressed with one of Burns’s poems before it’s cut open, dashed with scotch whisky and served.

For all the debate about authenticity, some people are genuinely excited about Macsween’s entry into Canada. Ottawa resident Marilyn O’Keeffe has never been one to celebrate Burns Night, despite migrating from Edinburgh in 1982. But she went to school near a Macsween butcher shop and ate its haggis on a regular basis; she considers it the best there is. “It’s comfort food,” she says. “It’s really tasty.” For too long, O’Keeffe says, she put up with haggis products in Canada being sold in cans: “I’d just roll my eyes and be like, ‘What is that abomination?’ ”

Now that Macsween is coming, she’s already plotting her Burns Night celebration, where a lung-less Macsween haggis will be served alongside “neeps and tatties” (mashed turnips and potatoes). It will bring back memories of home, she says, noting that “food is one of the things that really does it—the scent of certain things or the taste of certain things.” The haggis skeptics among her friends and family are welcome to bring whatever they like, O’Keeffe adds—except quinoa.