Behind the acerbic television persona resides the sensibilities of the artist

You know Kevin O’Leary, right? He’s the gelid-hearted executioner on CBC’s Dragon’s Den and ABC’s Shark Tank. On The Lang and O’Leary Exchange, CBC’s daily business show, he displays the nuance and subtlety of bleach. His brand of blunt financial counsel has earned him both an audience and a reputation. This month he floats more of his typically mordant advice in Cold Hard Truth: Men, Women and Money—a primer on how to stay solvent, and thereby, he says, happy. But there is another Kevin O’Leary. Behind his acerbic television persona resides the tender sensibilities of the artist. Every thorn has its rose.

Much in O’Leary’s life conspired to lead him to his true passion in life: photography. His early years taught him his watchful eye. As a child he witnessed his beloved mother stagger under the emotional and financial problems of a broken marriage. Life improved, but grew complicated when his mom married an economist with the UN’s International Labour Organization. He was installed and removed from an array of exotic locations as he moved with his parents from various UN postings. Constant relocation defined him as an outsider, an observer. Dyslexia confounded him and he relied increasingly on images.

In 1970, as a student at Nepean High School in Ottawa, O’Leary bought himself a camera, a Soviet Zenit-E, and joined the photography club, becoming instantly captivated by the alchemy of the darkroom. He still has the photos he developed himself from that first roll of film and says that he couldn’t do any better today.

O’Leary says he learned to be a quick study: of people, of cultures and, most important, of opportunity. He chuckles telling the story of how his photographer’s eye has got him into trouble. “I was driving near the airport in Geneva and suddenly, this jet is bursting through these dark clouds and the light is so amazing, so I pull over the car and set up my tripod. A few moments later, the Swiss police show up to arrest me. Turns out, the pilot saw me and thought my tripod was a rifle, so he radioed the control tower.” He laughs, saying you only get one chance to get the shot; there’s no second chance. “My policy with photography is never ask for permission, just forgiveness.”

Comments like this bring O’Leary into focus. His practice of photography isn’t all that different from what he does on television. His assessment of each petitioner is brisk and final. Is he abrasive? Yes. Tactless? Sometimes. Controversial, too. He has vocal critics who have raised questions about the performance of his asset management company, O’Leary Funds.

Unshepherded, professional photographer would have been O’Leary’s métier. He’d imagined a life of German cameras, Scandinavian supermodels and vats of cash. His stepfather sat him down for a reality check on his career choice. Was he prepared to be a penniless artist? No, he was not. O’Leary trundled off to earn an M.B.A. from the University of Western Ontario, eventually lurching through a career in television production, an educational software company (sold, controversially, to Mattel for $4 billion) and on to his present success as financial pundit.

Still, he kept his camera within reach. He’s had a darkroom in every house he’s lived in and has archived thousands of photos. “I want to capture every moment that’s relevant to my life,” he explains. “For me, photography is all about light, but I also love the editing process. Right out of university, I started editing images for my TV production company. If I lost everything I have today, I’d go back to work as an editor. I love it.”

Does he collect photography? No, he invests in it, noting that “photography is the art asset class that has appreciated most in the past 20 years.” To that end, his photography portfolio, heavily skewed toward Canadian photographers, boasts works by Edward Burtynsky, Barbara Cole, Joshua Jensen-Nagle and Astrid Kirchherr.

Sifting through his many photos, he is asked if he had any special subjects he liked to photograph. His reply is classic O’Leary: “I don’t like pictures with people in them.” Every rose has its thorn, after all. 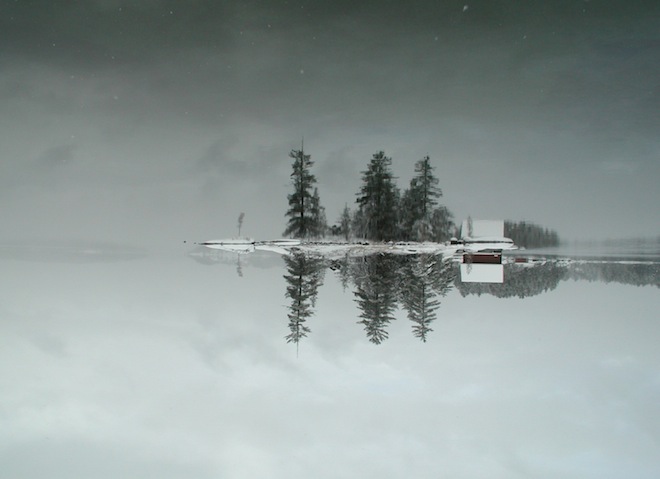 There comes a moment in the late fall on a northern lake when the surface freezes. It happens in a split second. One moment you can hear the water lapping at the dock and the next complete silence. Like a golf hole in one, few people ever experience this. I took this image of Penny Island on Lake Joseph seconds before the lake froze. The water was perfectly calm and reflected the stormy sky. If you look closely you will see that the image is actually inverted, a testament to the almost perfect symmetry nature let me capture on film that day.