The strange history of hair removal 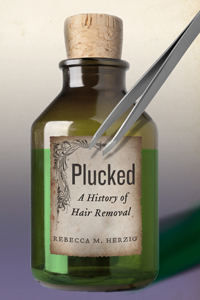 PLUCKED: A HISTORY OF HAIR REMOVAL

In 1940, a San Francisco police informant thought he had found an illegal abortion clinic, a house into which young women would enter, followed shortly afterward by a man with a medical bag. The “doctor” turned out to be carrying portable X-ray equipment, and the women were clients wanting—in a dangerous procedure that had been recently outlawed—to irradiate away unwanted body hair.

Herzig’s history of the growing American antipathy to body hair, and the means used to deal with it, is full of such arresting moments. By its title, Plucked would seem to offer a volume of frothy fun (tinged with schadenfreude) about the high cost of fashion glory; it turns out to be eye-poppingly informative, thought-provoking and, almost against the author’s will, frothy fun. Absurd as much of the story is, Herzig never loses sight of the fact that women have died in the pursuit of hairlessness.

Given the trajectory from clamshell razors and homemade lye depilatories—both painful to even contemplate—to the contemporary multi-billion-dollar hair-removal business, it might surprise readers to learn that northern Europeans once had little issue with body hair. (In fact, as the culture that invented the merkin, a genital wig used by prostitutes forced to shave their lice-ridden pubic areas, Europeans once drew a positive connection between pubic hair and sexual pleasure.) English colonists were fascinated by Native Americans’ interest in plucking and shaving, and took their relative hairlessness as a sign of racial degeneracy.

That was the beginning, in body-hair terms, of the eternal American pattern of injecting racial politics into everything. By the time racialized Darwinian thinking gave a “scientiﬁc” basis to claims of white supremacy, the Caucasian tendency to have more body hair—that is, to be more animal-like in appearance—than darker-skinned people was a problem. Combine that with a revolution in the amount of flesh socially acceptable to display—a hairy-legged Victorian woman did not have to worry about the public scrutiny faced by her flapper-era granddaughter—and the American female revulsion with her own hair was almost complete by the 1920s.

But not yet all-encompassing. Contemporary men are assaulting body hair as enthusiastically as women, who have gone on in large numbers to consider their pubic hair “superfluous,” as Herzig puts it. The drive for smooth skin seems to have hit its apogee, given how little body hair remains to offend, unless, and until, we grow tired of the amount of effort involved in plucking eyebrows.