The top 10 forgotten films of TIFF

How could a rom-com musical starring Steve Buscemi and Mandy Moore go wrong? Ten films that vanished after the fest 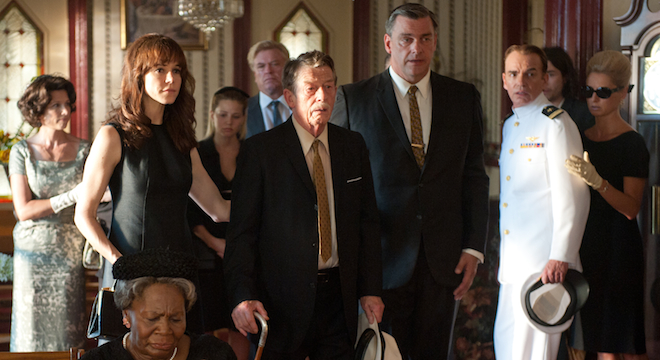 A scene from Jayne Mansfield’s Car.

Every September, hundreds of filmmakers arrive at the Toronto International Film Festival with visions of fat paycheques and Oscar nominations dancing in their heads. Some are already riding a sizable wave of hype, either from earlier showings at Cannes or the natural cockiness that comes with having big-name stars and A-list producers. Others saunter in with barely a whisper of word-of-mouth, only to leave the festival as the Next Big Thing. Yet for every Silver Linings Playbook or Whale Rider, there are countless other TIFF selections that simply vanish once the festival wraps, only to reappear years later, almost embarrassed to finally be seen.

Here’s a look back at the festival’s Top 10 forgotten films:

1. All the Boys Love Mandy Lane: A slasher with a subversive twist, the feature debut of director Jonathan Levine (50/50, Warm Bodies) made its world premiere as part of TIFF’s Midnight Madness program in 2006. The Weinstein Company quickly snatched it up after a rapturous reception, but then sat on it for a year before finally selling it to Senator Entertainment—which then went out of business. The film will see its North American theatrical release this September, a mere seven years after its TIFF bow. Time from TIFF to screen: Seven years

2. Chinese Coffee: In between playing sadistic football coaches and Satan himself, Al Pacino took a short, experimental break from blockbusters by directing and starring in this talky adaptation of a Broadway play. While it screened as part of TIFF’s Special Presentations program in 2000, Pacino’s marquee name apparently couldn’t sell it to general audiences, with a DVD edition finally popping up in June 2007 as part of a box set called The Al Pacino Collection. Time from TIFF to screen: seven years

3. Prozac Nation: Although it was based on Elizabeth Wurtzel’s acclaimed autobiography and boasted a big-name cast (Christina Ricci, Anne Heche, Jason Biggs), the morose drama failed to connect with audiences after having its world premiere at TIFF in 2001. After a few re-edits failed to improve matters, director Erik Skjoldbjaerg’s film finally made its U.S. debut in 2005—but not in the multiplex, or even in art-house theatres. It instead aired on the cable network Starz. Time from TIFF to screen: Four years

4. The Hole: Normally, a 3D horror-thriller by genre legend Joe Dante (Gremlins, Innerspace) would be cause for celebration. Yet Dante may have been too ahead of the 3D curve back in 2009, when he screened this small-budget, star-free film at TIFF. Although it earned mostly positive reviews, the movie seemed to fall into its own, well, hole, refusing to come again out until September 2012, when it received a limited North American DVD release. Time from TIFF to screen: Three years

5. The Weight of Water: Before she was sparking counter-terrorism debates in Washington, Zero Dark Thirty director Kathryn Bigelow brought this heavy Nova Scotia-shot drama to TIFF in 2000. Although it starred festival favourites Sean Penn and Sarah Polley, the film—which focused on a modern-day reporter’s investigation into a century-old murder—quickly evaporated from critics’ minds. It bounced around the festival circuit until securing a limited U.S. theatrical run in November 2002 with little fanfare. Time from TIFF to screen: Two years

6. Picture Claire: A would-be thriller from Canadian workaholic director Bruce McDonald, Picture Claire is big on Toronto scenery and low on coherency. Even its mid-level genre cast (Gina Gershon! Mickey Rourke! Juliette Lewis!) couldn’t scare up a distributor after its 2001 TIFF premiere, forcing the film to fend for itself in the direct-to-DVD world in June 2003. Don’t worry about McDonald, though: he returned to the festival in 2007 and 2008 with the back-to-back critical hits The Tracey Fragments and Pontypool. Time from TIFF to screen: Two years

7. Romance & Cigarettes: How could a romantic-comedy musical starring James Gandolfini, Steve Buscemi and Mandy Moore go wrong? More realistically, how could it possibly go right? These must have been the questions floating around in the mind of John Turturro, who took time out from his acting career to write and direct this labour of love that arrived at TIFF with a thud in 2005. Due to a complicated financial background, the film only made its way to a handful of foreign markets before getting a (very) limited U.S. release in September 2007, distributed by Turturro himself. Time from TIFF to screen: Two years

8. Revolver: In 2005, director Guy Ritchie was coming off the worst reviews of his life for Swept Away (his ill-fated partnership with then-wife Madonna), and was in desperate need of a hit. Instead, he got Revolver, a hacky thugs-and-guns thriller that aped his earlier film, Snatch, right down to its casting of Jason Statham. Critics pounced when it unspooled at TIFF, and the film quietly shuffled back to Britain, where it opened a few weeks later. It didn’t hit North American screens, though, until December 2007, giving audiences two more years to forget about Ritchie until Sherlock Holmes came out. Time from TIFF to screen: Two years

9. Jayne Mansfield’s Car: Billy Bob Thornton may be a prolific actor, but his directing CV is so shoddy it’s surprising studios let him near a camera. While his debut Sling Blade captured festival-goers’ hearts from Telluride to New York (even if it did skip Toronto), his subsequent efforts (All the Pretty Horses, Daddy and Them) all endured rocky roads to release. Jayne Mansfield’s Car is no different: After playing TIFF in 2012 to lukewarm reviews, the Southern melodrama found its way to a video-on-demand debut in August, with a Russian theatrical release scheduled for September. Time from TIFF to screen: One year, but only if you live in Moscow

10. Los Angeles Plays Itself: This film is a special case, as it wasn’t poor audience reaction or distributors’ cold feet that kept Thom Andersen’s “video essay” from general release after its 2003 TIFF premiere. Instead, the film, which explores the role that L.A. geography and architecture has played in cinema, found itself up against myriad rights issues, since it consists of nothing but clips from other movies. The only way to see the film now is at festivals and special presentations with Andersen present. Time from TIFF to screen: Never, in a sense