'When in doubt, be Stevie Nicks' 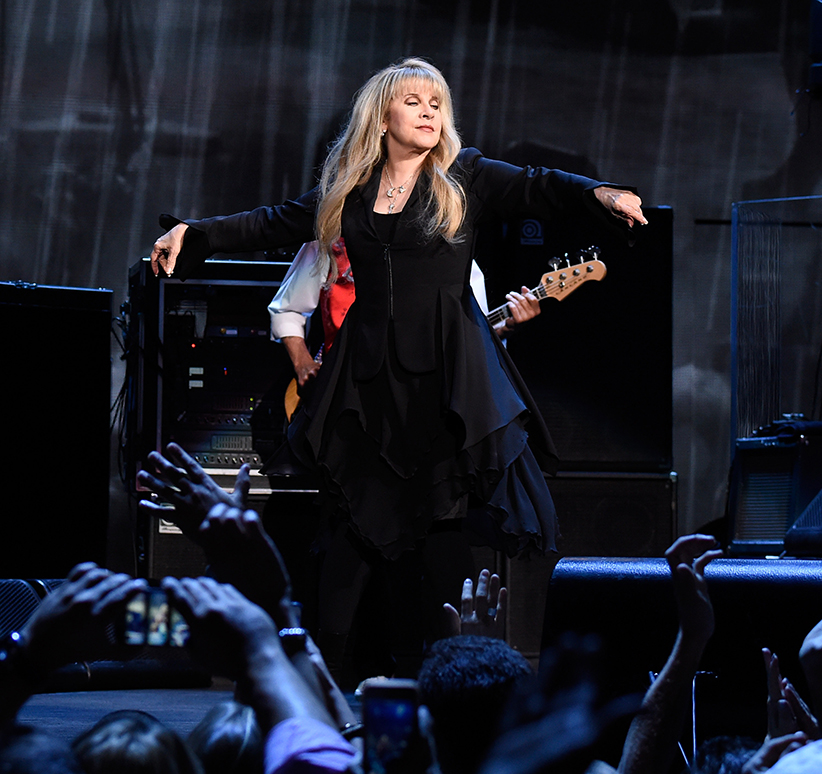 A night owl by nature, Stevie Nicks was unable to sleep on a recent Saturday night in Manhattan and had scheduled a late interview to help pass the evening. So 1:30 a.m. found her looking out on the terrace of her rented penthouse atop the Palace Hotel, with a hypnotic view of the Rockefeller Plaza. Amid a torrent of recollections—of her band, Fritz; of the duo she later created with former lover and Fritz guitarist, Lindsey Buckingham; and, of course, of Fleetwood Mac—Nicks began to hum a hip-hop tune. “Which rapper is it that I love who says, ‘Mo’ money more problems?’ ” she asked, pausing in the midst of Notorious B.I.G.’s biggest hit. “He spoke the truth. Don’t I know it!”

The history is relevant; her recent solo album, 24 Karat Gold, reinterprets demos written before, during and after Fleetwood Mac’s rise. In it, Nicks doesn’t simply cover her own work; she acts as a musical necromancer who resurrects old sounds and personal stories of burned love, life on the road and facing demons. The song Twisted, first released on the soundtrack for the 1996 disaster-drama Twister, flicks at the appetite for danger all five band members shared. “It was originally written about a group of tornado chasers who dedicate their lives to hunting down storms,” she said. “The parallels to Fleetwood Mac are so there.” The mix of emotion, narcotics and creative egos brought forth a bounty of songs, and turbulent romances. Nicks ended her relationship with Buckingham in 1975, and had an affair with drummer Mick Fleetwood. Christine McVie, the band’s keyboardist-vocalist, left the guitarist for the sound engineer. “After the show, we wouldn’t go out,” Nicks said. “[Christine] would drink wine spritzers and I’d drink tequila alone in our adjoined rooms. The boys were angry at us [and] we had to see them in the morning to work.”

Nicks’s record is timed to a Fleetwood Mac reunion; the group is booked for more than 40 dates in Europe and Australia, and McVie rejoins them after a 16-year hiatus. On tour, Nicks and Buckingham, who share time alone on stage during the ballad Landslide, remain uncomfortable co-workers. “Fences will never be mended with Lindsey and me,” Nicks said. “We don’t agree on anything. If something’s going on [and] I’m doing something that Lindsey doesn’t like, his manager tells my manager. I don’t care what he thinks.” 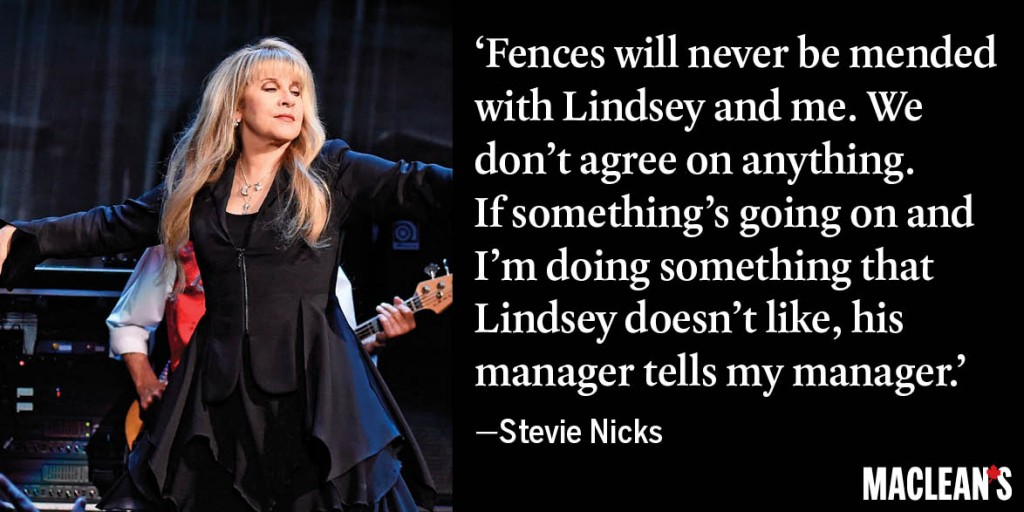 The distance is working for Nicks. The solo project, produced by former Eurythmics guitarist-producer Dave Stewart, contains some of the best recordings she has made in two decades. The work riffs on the witchy reputation she has propagated referencing Welsh mythology and wearing sorceress-style shawls, and which is enjoying something of a moment. Nicks had a cameo on the HBO series American Horror Story: Coven last year and was a guest judge on The Voice. “I could never be Madonna,” she shrugged. “It’s too much work to be a chameleon.” She will not be dressed by stylists—“They steal your personality”—or coerced by A&R people (“Nobody has the balls to tell me what to do”). Her ’70s bohemian look is referenced by fashion designers ranging from Rodarte to Ralph Lauren. Her duets with Dixie Chicks and Taylor Swift are awards-show ratings draws. The 18-year-old editor Tavi Gevinson gave this advice to her platoon of Millennial followers in a TED talk: “When in doubt, just be Stevie Nicks.”

The 66-year-old Nicks does not own a cellphone or computer, but she’s aware of the momentum behind her. She wants to record a sequel to 24 Karat Gold. She plans to launch a capsule collection of clothing, a jewellery line and a perfume. “I spend so many late nights mixing scents with cinnamon,” she said. She had advice for young, scantily clad singers she sees backstage at awards shows. “It’s degrading, and it makes women appear to be fancy little hookers. If you are not at least somewhat of a feminist, you’re going to be taken advantage of.”