Why the Jian Ghomeshi story has changed everything

Jian Ghomeshi may just be beginning his legal journey, but already his case has demanded a radical shift in the way we handle sexual assault 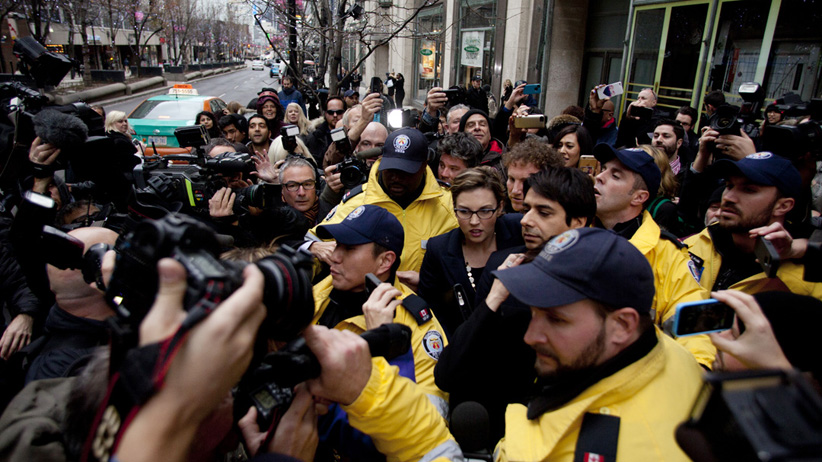 If you managed to ignore the news helicopter hovering overhead and a mob of photogs swarming below, Jian Ghomeshi’s bail hearing this week in a Toronto courtroom was a textbook case of uneventful legal protocol. Ghomeshi, who will plead “not guilty” to four counts of sexual assault and one of choking, sat in the prisoner’s box as lawyers read out charges, negotiated the terms of his $100,000 bail and told the court a publication ban would extend to two of three women laying charges (the third, Lucy DeCoutere, waived the ban; she’d previously gone public with allegations Ghomeshi choked and hit her). Meanwhile, courtroom artists sketched the scene, as if cameras had not yet been invented. And, in another quaint touch, the judge reminded the assembly that the accused is “innocent until proven guilty.”

Outside that legal orbit, of course, a different reality has prevailed. The seismic response to allegations levied against Ghomeshi meant his reputation lay in tatters weeks before criminal charges came down. In the space of a month, the voices of nine women who’d brought allegations against him had risen to a chorus of diverse stories about sexual assault on the hashtag #BeenRaped­NeverReported, stories that didn’t involve the one-time CBC Radio star.

The aftershocks were felt on Parliament Hill. A week into women going public with allegations against Ghomeshi, a woman told the National Post that their example inspired her to speak out about the brutal harassment she experienced as an intern from a staffer in a Liberal MP’s office eight years ago that led to two suicide attempts; when she raised complaints with the Liberal party HR department, she said, she was fired. That wasn’t the upshot when a female NDP MP approached Justin Trudeau to allege a Liberal MP had assaulted a female NDP colleague, and later told a Liberal party whip that she herself had also been assaulted by a Liberal MP. Trudeau quickly suspended Massimo Pacetti and Scott Andrews from Liberal caucus for “personal misconduct” before any investigation or charges took place (both men deny any wrongdoing).

The “Ghomeshi effect” extended south of the border as well, with a reprise of rape allegations against Bill Cosby, long supressed by the media, as more women came forth this month, bringing the count to 19. Cosby, who has not been charged and who has denied all allegations, was quickly dropped from new projects on Netflix and NBC.

The women who come forward with their names—and the throngs who’ve supported them—have given rise to a new honesty and a steely resolve to confront sexual assault. It was evident this month when the family of Rinelle Harper, the 16-year-old Winnipeg girl who was sexually assaulted and left for dead, made her identity public in an attempt to find the perpetrators. “It was courageous and perspicacious approach,” says Toronto lawyer Brian Rogers: “It helped personalize and dramatize and produce results.”

Bringing the human element into the equation may be the biggest legacy so far of the Ghomeshi case: it put names and faces of accusers alongside that of a high-profile, powerful accused, creating a broader story that typically unfolds in silence and secrecy; in so doing, it forced the issue into the daylight. What we are now seeing is that the system put in place to protect victims can lead to silence and shame. Consider the publication ban imposed on a 17-year-old Nova Scotian who was the subject of international coverage last year after she tragically hanged herself; she had been raped by four boys at a party and then tormented when photographs of the assault were circulated online. The ban, imposed under the Criminal Code to protect victims of sexual assault and minors, literally rendered the teenager, who wanted the media to cover her plight, invisible—in the court’s word, “[redacted].” The ban faced legal challenge from local media outlets, and had been opposed by the Crown attorney as well as the victim’s parents. Earlier this month, the Halifax Chronicle-Herald defiantly violated it. “Solutions never come from silence, only injustice comes from silence,” the girl’s father wrote in an open letter.

A fomenting revolt against systemic attitudes toward sexual assault, a sort of Occupy Main Street, was in full swing before allegations against Ghomeshi landed. It was evident in the roiling debate about “rape culture” on campuses (a topic Ghomeshi tackled on his radio show) and the emergence of #YesAllWomen after Elliot Rodger’s misogyny-fuelled rampage in California that mobilized women to share stories of violence they’d experienced.

Ghomeshi, whom many Canadians invited into their home and car every day, became a lightning rod by becoming the identifiable face for the most common, misunderstood and difficult-to-litigate form of sexual assault—“date rape” or “intimate rape,” to use the oxymoronic terms. 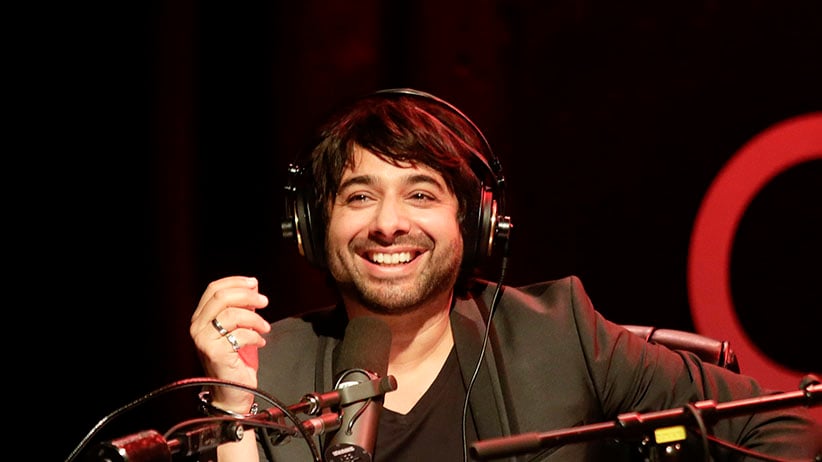 Ghomeshi’s remaining star wattage was enough to force klieg lights onto “rape culture” in a way his show never did. Response to the Facebook post he issued in self-defence can now be seen as a blueprint of entrenched attitudes and biases: the reflexive early acceptance of his version of events; his blaming of the victim, which at first went unchallenged in many quarters; his assertion that he alone could prove consent. As time passed, the response to the allegations provided a lesson in the arithmetic of sexual violence: one complaint will be ignored; a pattern commands attention.

Reva Seth, a lawyer when Ghomeshi allegedly assaulted her, instructively spelled out the difficulty and emotional cost of women coming forward to report “date rape” in a Huffington Post column. The aftermath of the allegations also pointed to the importance of male support—seen in Owen Pallett’s  “Jian Ghomeshi beats women” blog post and in the way comedian Hannibal Buress reignited the allegations against Cosby when he called him out as a “rapist” onstage last month.

The Ghomeshi example also bristles with institutional enablement—that the University of Western Ontario warned female students not to intern on Q, and, more grievously, that the CBC failed to go to the police after its executives saw evidence of a woman being hurt by one of their stars. Both institutions simply distanced themselves from what appeared to be a devastating problem, rather than try to address the issue head-on; they were as reluctant to go to official channels as were the women who were more comfortable tweeting about sexual assault.

That the conversation has taken place off the legal grid, and in the Wild West of social media anonymity amid #BelieveAllWomen, has been a source of concern for many. But it also reflects frustration and even contempt for a legal process that failed Rehteah Parsons. As Pallett wrote: “Whether the court decides that predatory men are punished or exonerated does not silence the voices of the victims. It does not make victims liars.”

Social media has paved way to a new openness about discussing assault, says Rogers. “There’s greater comfort with sharing information once considered private and personal.” He’s seeing a greater willingness for allegations to be made public at an earlier stage, not just in the context of eventual trial in criminal court. This is allowed under the law, he says: “The defence of responsible communication does permit, on matters of public interest, a broader availability of information as long as the other side is given the opportunity to respond.”

Workers scrape a wall which had a publicity photo of former CBC radio host Jian Ghomeshi in the broadcasting corporation’s Toronto offices on Monday October 27, 2014. (Chris Young, The Canadian Press)

Victims of sexual assault are also increasingly willing to identify themselves, to reject the notion that being a victim of sexual assault is in any way shameful, says Toronto criminal lawyer Jonathan Rosenthal: “You’re seeing a lot more people refuse to hide behind the publication ban.” He points to the recent outing of complainants in the case against Nova Scotia businessman Ernest Fenwick MacIntosh who, in 2007, was found guilty on 17 counts of sexually abusing four boys in the 1970s and 1980s; his conviction was overturned at the Supreme Court on the grounds it took too long to bring him to trial. Six of MacIntosh’s accusers were photographed in an advocacy ad in the Chronicle-Herald this month, lobbying the province to waive the statute of limitations on sexual abuse allegations, as other provinces have: “We are the people who had to stand by silently as the wheels of justice ground slowly, fitfully onward and eventually crushed not the perpetrator of these actions, but the very victims who looked to the court system to provide justice.”

Rosenthal doesn’t believe shifts in attitudes will translate into the way sexual assaults are prosecuted or defended. No one for a second believes that Ghomeshi’s notoriously hard-hitting lawyer, Marie Henein, will treat Ghomeshi’s accusers with kid gloves, despite public support for his accusers; her responsibility to her client requires annihilating the women in any way possible. Rosenthal does see one change emerging from the Ghomeshi example: “I think there’s going to be a greater awareness of sexual harassment in workplaces by—and big quotes here—celebrities. I don’t think you’ll see another guy working at CBC who has a well-known reputation, allegedly, of sexually harassing young women get away with it.”Paradoxically, the hoopla surrounding Ghomeshi’s case actually exposes a general lack of concern about sexual assault, Rosenthal believes. He points to the lawyers who came forward saying they’d represent, for free, any women any who made criminal allegations against Ghomeshi: “Have these four lawyers done this for every other victim of sexual assault?” he asks. “Absolutely not.”  Were this a coffee boy at CBC, this would not be in the paper, Rosenthal argues: “It would be a run-of-the-mill case that you see in this country every day of the week.” A double standard is at work, no question. But if Ghomeshi’s “effect” teaches anything, it’s that the story is no longer about a former radio star, now a convenient, media-friendly symbol for sexual assault. It’s so much bigger.