The 10 biggest mistakes in TIFF history

From battlefield busts to a CanCon-killing hockey musical, a look back at TIFF's gala gaffes 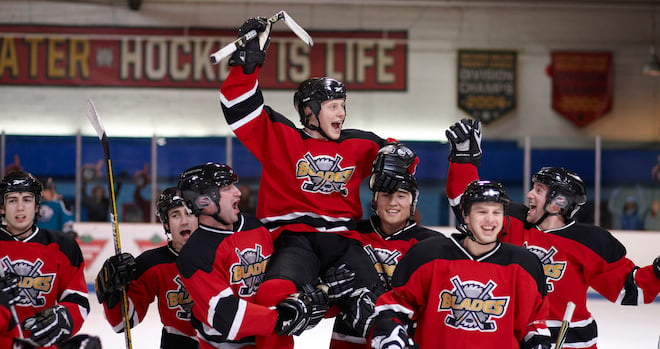 Snagging a gala slot at the Toronto International Film Festival is a mixed blessing. On one hand, any gala is guaranteed a red carpet reception, complete with crazed photographers and caffeinated TV crews, plus the luxe screening environs of the fest’s most elite venue, Roy Thomson Hall. On the other hand, the “gala curse” is a favourite theory whispered among festival-goers, with the program’s films often going down as snoozy prestige pics, there only to pique the paparazzi’s interest and please studio overlords. Before we hand down any verdicts on this year’s lineup, though, let’s take a look at some of TIFF’s past gala gaffes.

1. Score: A Hockey Musical: Meet the film that killed the long-held TIFF tradition of having Canadian movies open the festival. The patriotic-to-a-fault musical—directed by the usually dependable Michael McGowan and featuring a host of CBC-approved cameos—kicked off 2010’s festival, and was quickly torn apart. The Globe and Mail‘s Rick Groen delivered the biggest hit, quickly pronouncing it possibly the worst film to ever open TIFF, accurately decrying its parochialism and general listlessness. Perhaps taking the hint, TIFF has since ensured all opening-night films are CanCon-free.

2. Jakob the Liar: Patch Adams may have sparked the downfall of Robin Williams, but Jakob the Liar sealed it. The 1999 film—about a fabulist who gives his fellow ghetto inmates hope during the Holocaust—proved to be both a bore and an insult, especially compared to the Oscar-winning Life is Beautiful, which hit the festival two years earlier. The $45-million drama, which eventually earned a mere $4.9 million, precipitated a long line of Williams-approved treacle, and garnered the actor a Razzie nomination for worst actor.

3. Passchendaele: Heavily hyped as Canada’s answer to All Quiet on the Western Front (or, at the very least, Gallipoli), director/writer/star Paul Gross’s First World War epic was quickly killed on the opening-night battlefield. Although some homegrown critics tried to justify the 2008 drama—with the Genie Awards even consoling it with a best picture statuette—the $20-million film has been all-but forgotten … except perhaps by disgruntled investors, as it only grossed $4.4 million.

4. Creation: Director Jon Amiel’s Charles Darwin biopic has a few distinctions to its name, none of them particularly good. First, the 2009 pic started the trend of non-Canadian films opening the festival (a fate that would be secured the following year thanks to Score: A Hockey Musical‘s dismal performance). Second, it is emblematic of the festival’s “gala curse”: a seemingly noble film with a media-friendly cast (the real-life husband and wife team of Paul Bettany and Jennifer Connelly) that unfortunately goes nowhere, both financially and critically.

5. The Four Feathers: Another would-be war epic that fell victim to its own relentless mediocrity, director Shekhar Kapur’s 2002 drama featured such then-mega-stars as Heath Ledger, Kate Hudson and Wes Bentley, yet failed to connect. In fact, the dull drama would prove to be the nail in Bentley’s nascent career, with the American Beauty star failing to appear in anything of note until 2012’s Hunger Games (we’re not counting 2007’s Ghost Rider). As for Kapur, he didn’t direct another picture until five years later—even if that film did turn out to be the acclaimed Elizabeth: The Golden Age.

6. Loving Couples: Anyone who still remembers TIFF’s 1980 edition surely wants to forget this romantic-comedy bomb, a lazy update of Paul Mazursky’s Bob & Carol & Ted & Alice. Although its stars Susan Sarandon and Shirley MacLaine made the TIFF gala seem like a sure thing, audiences and critics trashed the film, with the film grossing a mere $2.8 million (which, yes, was bad for even the 1980s).

7. Jiminy Glick in Lalawood: A classic example of TIFF acquiescing to CanCon producers, this 2004 Martin Short satire was granted a gala, but left everyone—likely even the projectionist—feeling embarrassed. While Short should be commended for his frequent industry boosterism—he was the best part of this year’s inaugural Canadian Screen Awards—this one-note insider’s joke should have gone direct to DVD. Or the CBC.

8. Great Expectations: A victim of both bad timing (the BBC having just released a lauded miniseries) and poor casting choices, Mike Newell’s adaptation of Charles Dickens’ classic failed to ignite any interest at 2012’s festival, slipping in and out like a Magwitch in the night. Although it enjoyed some attention in Britain—mainly due to Helena Bonham Carter’s gonzo take on Miss Havisham—the middling film took more than a year to secure a theatrical release in North America, and is a perfect example of the dry, sounds-good-on-paper movies that are endemic to TIFF’s gala programming.

9. The Assignment: Starring Donald Sutherland, Ben Kingsley and Aidan Quinn (back when Quinn’s name carried some weight), this 1997 thriller should have been a decent foray into the well-trod espionage genre. Instead, it was a flat gala offering that provided cameras a glimpse of some famous faces, and about two hours of boredom for anyone trapped inside the theatre. Still, that year’s gala films weren’t all disasters, as the ’97 slate also included L.A. Confidential, The Sweet Hereafter and Gattaca.

10. Without Limits: Another Donald Sutherland entry (sorry, Donald!), this biopic of long-distance runner Steve Prefontaine was ill-fated from the start, having the rotten luck to follow Disney’s own Prefontaine movie (called, ahem, Prefontaine) released the year before. Even though it had a power-house producer in Tom Cruise and an A-list director in Robert Towne, the 1998 pic sprinted into Toronto with little advance buzz, resulting in low press and an even lower box office take (just under $800,000 on a $25-million budget).