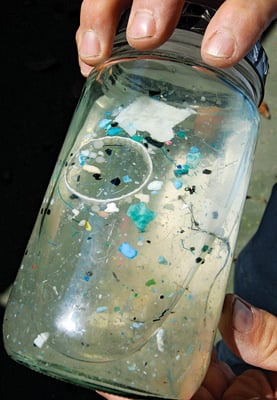 The sea, as any poet will tell you, invites metaphor, and scientists are as susceptible to its powers as those who deal in tropes. Having surveyed the stew of shattered plastic, discarded tires and floating refrigerators gathering in the mid-Pacific, the oceanographer Curtis Ebbesmeyer raised a worldwide alarm a decade ago about a burgeoning “garbage patch”—the result of centripetal ocean currents and convergent weather patterns in a vast, subtropical swirl known as the North Pacific Gyre. To say the least, this label captured the public imagination. The Great Pacific Garbage Patch shot up the hierarchy of environmental causes, garnering the sort of attention reserved for clear-cut logging, or global warming.

But it wasn’t enough to sate today’s multi-platform media monster. By 2005, the fervid accounts of eco-bloggers and mainstream journalists were elevating the patch to an “island”—as if you could step from the deck of a boat and walk across it. Oprah Winfrey’s website described it as “the world’s largest trash dump” and “the most shocking thing” the TV host had “ever seen.” “Estimated to be twice the size of Texas, it swirls across the Pacific from California to Japan,” the site proclaimed, notwithstanding the fact Oprah had never seen it first-hand. “In some places, it’s 300 feet deep and has killed millions of sea birds and marine mammals.”

Er, not quite, says Angelicque White, an oceanographer who has actually visited the gyre. Based on water samples and data gathered during a research voyage in 2008, the Oregon State University scientist last week issued an analysis letting a lot of air out of the Great Pacific Garbage Patch, describing it not so much as an island or even a patch, but as a highly diffuse soup, in which tiny shards of plastic float metres, if not kilometres apart. “Imagine 1,000 one-litre bottles sitting in front you, all full of water from this area,” she says from her office in Corvallis, Ore. “Three to five of those bottles would have one piece of plastic the size of a pencil eraser. It’s not twice the size of Texas. You can’t see it from space. It’s not even something you can see from the deck of a ship.”


That’s not to say the plastic is a non-issue. White was part of a scientific cruise to the region researching microbial activity springing up around the flotsam, some of which is broken down into microscopic particles. The capacity of plastic to alter life at the bottom of the food chain is regarded in scientific circles as its true threat—in part because researchers know so little about it. White worries that cause will lose steam if the public decides the problem has been overblown. “I don’t want people thinking, well, we don’t have to conserve resources,” she says, “we don’t have to recycle or worry about marine pollution because there is no patch that is twice the size of Texas.”

How, then, did hyperbole assume the weight of fact? Ebbesmeyer, who is famous for charting surface currents by mapping the locations of recovered flotsam, figures people allowed their imaginations to fill in what they would never see. But he’s not sure that’s such a bad thing. “The descriptions have, perhaps, gotten out of hand,” he says. “But these are large tracts of the planet most people will never view, and I think the media attention has had a benefit. So it’s not an island you can walk on. But it’s a really horrific issue.” As for the comparisons to Texas, he acknowledges they likely came from him. He was referring, he says, to the scale of the North Pacific ocean swirl itself, which has been charted with the use of satellite-tracked buoys. Concentrations may vary, he adds, but it is almost certainly strewn with plastic debris.

Perhaps, but White found a lot less of that junk in the gyre than she was led to expect. Using the standard method of towing a “net” of cheesecloth-like material through the water, she and a team from Hawaii’s Center for Microbial Oceanography needed hours to find a handful of small plastic shards, she says. During a separate, more recent trawl in waters between Easter Island and Chile (another area feared to hold vast amounts of sea junk), she found no plastic at all. That’s an awkward result to explain, she says, to people imagining a research ship surrounded by flotsam, or satellite photos of a trash flotilla. During a recent radio talk show in Oregon, a dismayed White heard a host demanding to see footage of the hypothetical “island,” then derisively adding: “They oughta be selling real estate.”

The anticlimactic findings haven’t swayed her from her original mission to measure and study the microbial life that is undeniably blooming on and around the man-made crud. “I’d hate for reliable science to get lost in this along the way,” she says. But it’s a safe bet that she’ll temper the language of her final study—lest her own modest observations morph into something she doesn’t recognize.