The dragon from the west

Restaurateur Vikram Vij won Vancouver’s heart. Now the newest Dragon's Den judge is moving on to the rest of Canada 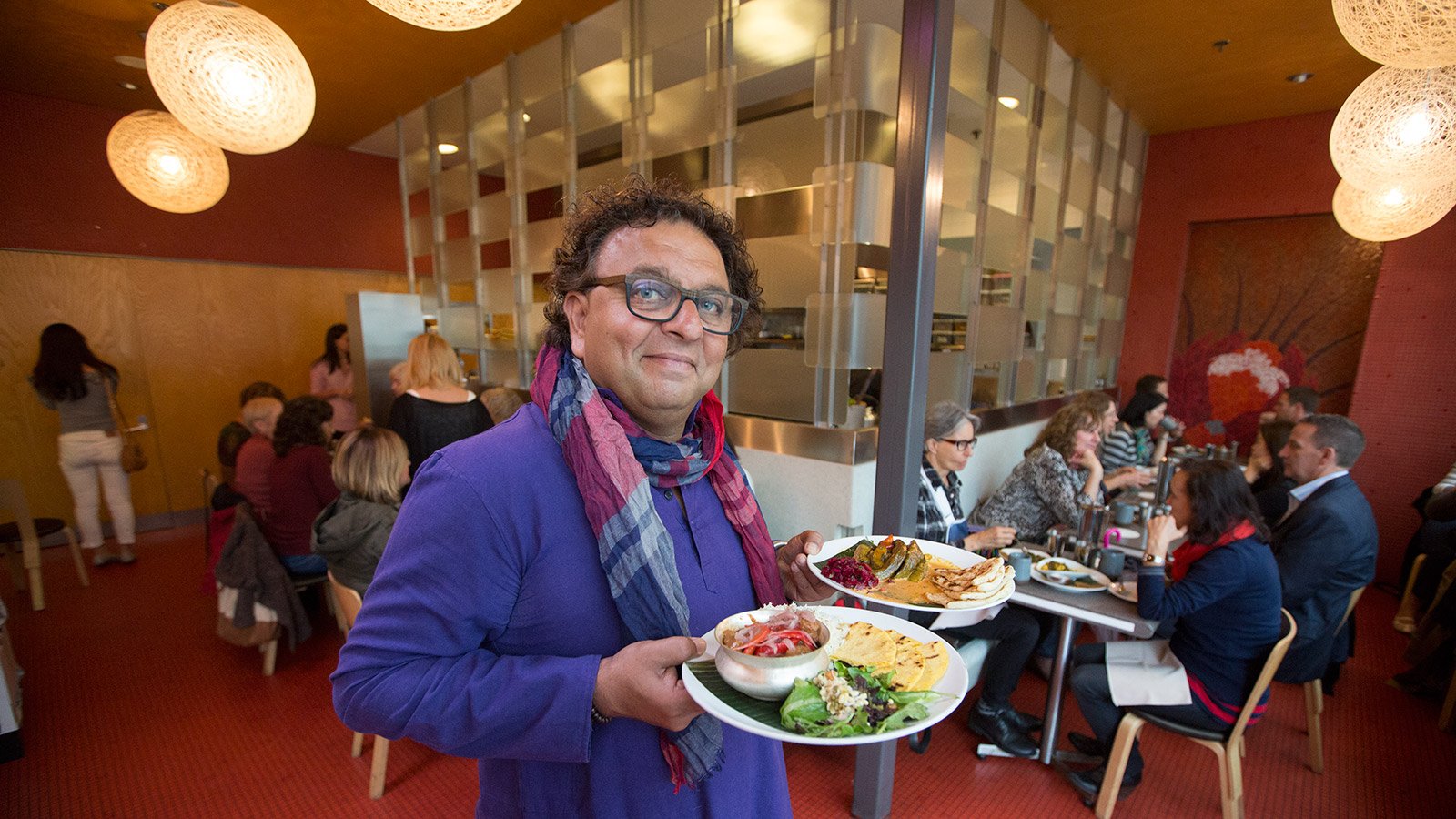 As he approaches 50, Vikram Vij is beginning to think of his legacy. While running one of Canada’s most celebrated restaurants—the eponymous Vij’s in Vancouver (the New York Times’ Mark Bittman once dubbed it “among the finest Indian restaurants in the world”)—seems like it would be more than sufficient, it’s clearly not enough for the big chef with the booming voice and mirthful smile. “It would be just one small but great restaurant in Vancouver that came and went,” Vij says. “I want everyone in North America to enjoy my cuisine—Indian food.”

It sounds like the sort of thing a celebrity chef might say before carpet-bombing local grocery stores with branded products. And, to be clear, Vij’s brand has already expanded well beyond the cozy neighbourhood joint where diners famously begin lining up around 5 p.m. There are the cookbooks—co-authored with wife and business partner Meeru Dhalwala—the growing number of spinoff or sister restaurants, including Vij’s new solo effort in Surrey, B.C., and another by Dhalwala in Seattle, and the expanding portfolio of TV appearances, newspaper columns and speaking engagements. More to the point, Vij’s empire now includes a $7-million plant in B.C.’s Lower Mainland that churns out Vij’s Inspired Indian Cuisine frozen entrees. There’s even a Vij’s flavour of potato chips and a Vij’s olive oil in the works.

Yet, Vij maintains he’s not about to become an Indo-Canadian version of Wolfgang Puck. In fact, it’s entirely possible his future contributions to the country will be only nominally food-related. His upcoming role as one of the panelists, or “dragons,” on CBC’s popular Dragons’ Den program suggests a subtle shift in direction. For Vij, the move seems to be a clever way to escape the strict confines of the celebrity chef—cookbooks, Food Network shows and occasional appearances on daytime television—while reaching a much broader national audience (which could only help his nascent frozen-food business). “Being a chef has given me the platform to be able to venture out into different fields,” he says. “We also have the chips and other things that aren’t 100 per cent food-oriented, although they still have to make sense financially within the whole picture.”

For the network, meanwhile, the inclusion of Vij helps reflect the fact that Canada’s business elite—and Vij is certainly an entrepreneur as much as he’s a chef—is no longer limited to a bunch of old white men (Jennifer Wood and Arlene Dickinson notwithstanding). And there’s no question Vij’s personal story is one that resonates with many Canadians. Born in India, Vij left for Austria at 19 to study cooking and hotel management. He came to Canada in 1989 after a chance encounter led to a six-month visa and a one-way ticket to work at the Banff Springs hotel. He later made his way to Vancouver and bought a small Middle Eastern restaurant, which he slowly converted to his home-cooked style of modern Indian cuisine.

Where it’s all leading isn’t yet clear—even for Vij. He says his focus remains food, but also sees himself as a sort of cultural ambassador. “My fight has been to bring awareness to my cuisine and my culture,” he says. “That’s been my focus, calling and my goal.” The impact is already being felt well beyond his bustling restaurants. “Cactus Club actually has one or two Indian dishes on the menu because executive chef Rob Feenie put them on there after we had conversations,” Vij says of the former Vancouver brew and burgers chain now headed by the decorated West Coast chef. Within his own empire, too, Vij is beginning to see his role as an elder statesman, although he stresses that he’s not contemplating retirement. If he were to open a new restaurant in, say, Toronto, it would likely be through a partnership with a young, relatively unknown chef who’s eager to shake things up—just as he once did. “You see these young Indian chefs in the kitchen and they’re just ready to bust through, ready for a breakthrough to happen. I can feel it in my gut when I go to these restaurants and see these young kids.”

Whether he’s wielding a saucepan or not, it seems the influence of Vikram Vij is only just beginning.