We need to talk about Kevin. And Andy. 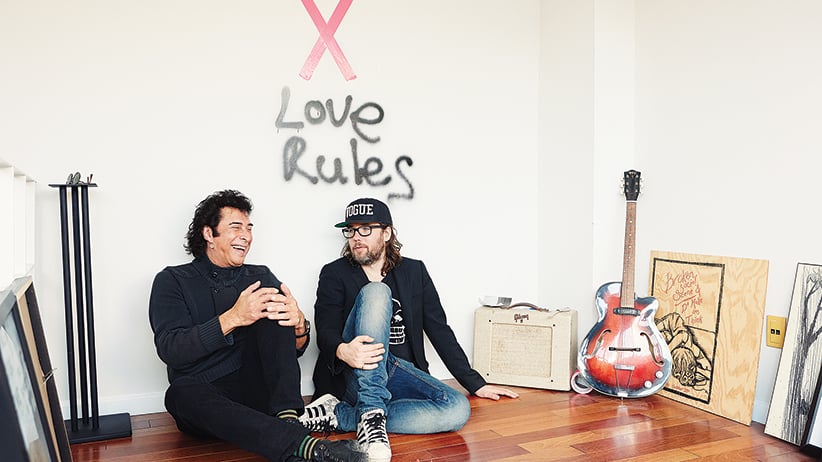 An interview with Kevin Drew and Andy Kim, two musicians from different eras in Canadian music, is more than a conversation about their working relationship and their new records. It’s more like group therapy with two men who love each other deeply. Andy Kim, 61, is a Canadian pop icon (Sugar Sugar, Rock Me Gently) old enough to be Kevin Drew’s father. Despite selling millions of records, he’s spent more than half his 45-year career in silence, considering himself “irrelevant.” His 2010 comeback album Happen Again was his first in more than 25 years. It did not, in fact, make it happen again. Drew, 37, is the bandleader of Broken Social Scene, the rock group whose expansive sound—and large lineup, which included Feist and members of Stars and Metric—put Toronto on the international music map. By the time the band went on hiatus in 2011, Drew was exhausted, often drunk. “I got angry and sulky and whiny and lost my way,” he says.

Drew credits Kim with lifting him out of the mire. “He brought back that teenage feeling about why you want to make music,” says Drew. “It had become a day job. He realigned me with that sadness that is the most beautiful thing you can have inside of you.” The newly re-engaged Drew can be heard on his second solo album, Darlings, out next week.In return, Drew produced a new album for Kim, It’s Emotional, due out later this year: It’s a sombre, spacious album unlike anything Kim has ever done.

Drew and Kim have much in common. Both men took charge of their own careers early on. At 16, Kim fled Montreal for New York with $40 in his pocket. He talked his way into the office of one of the biggest hitmakers of the day, Jeff Barry (Be My Baby, Leader of the Pack) and eventually struck gold with Sugar Sugar—better than gold, actually, because Barry convinced him to hang on to the lucrative publishing rights. When no one wanted to release Kim’s 1972 single Rock Me Gently, Kim put it out on his own label. It sold three million copies. As for Drew, after Broken Social Scene’s 2002 album You Forgot It in People became a hit, he co-founded his own label, Arts and Crafts, which has shepherded several acts who defined the last 10 years of Canadian rock music.

The two met in 2008, at a Christmas show Kim has hosted in Toronto since 2005, where generations of Canadian musicians from wildly different genres gather for a charity gig. The two men were immediately drawn to each other. “I’ve been around a lot of successful people,” says Kim, “who do not have [Kevin’s] level of caring and understanding. I don’t think I’m sitting here because of music. I’m sitting here because we have a relationship.”

Kim lived in L.A. for decades, moving to Toronto in 2004. “It was time for me to be a part of a community, and not some guy somewhere in L.A. who had a lot of hits. I’m not interested in talking to people from my generation who were in the business. Those people complain about how much better it was then—it was just different then, you know?”

Drew has always been drawn to older men. Most of Broken Social Scene is much older than he is. Geddy Lee of Rush appeared in one of the band’s early videos, and Drew’s first solo album, 2007’s Spirit If, had cameos from his ’90s heroes Tom Cochrane and Dinosaur Jr.’s J Mascis. “Leslie [Feist] has always said she was amazed I was the one bossing around the old guys. She literally thought, ‘Who does this asshole think he is?’ ” Now Drew is trying to breathe life into the career of a man 24 years his senior.

Meanwhile, Darlings is something Drew has never done before: short songs, a cast of five people and an attempt to be as emotionally direct as possible. “Because it’s my most conventional record, it’s my most experimental,” he says. “Whenever I would play a Social Scene song by myself, I felt the conviction wasn’t there; I needed my team, my army. With this one, I just wanted to sit and play the song.” But neither man wants to talk about “reinvention.” “I don’t like that word,” says Kim, “because the first time around, it wasn’t an invention. There’s a wonderful saying: The face you have when you are 21 is the face God gave you. The face you have when you’re 81 is the one you made for yourself.”