What would Jesus watch? Behold a new era in Christian film

Christian filmmaking is having a moment, eclipsing even movies about superheroes. Next? A devout remake of Ben-Hur. 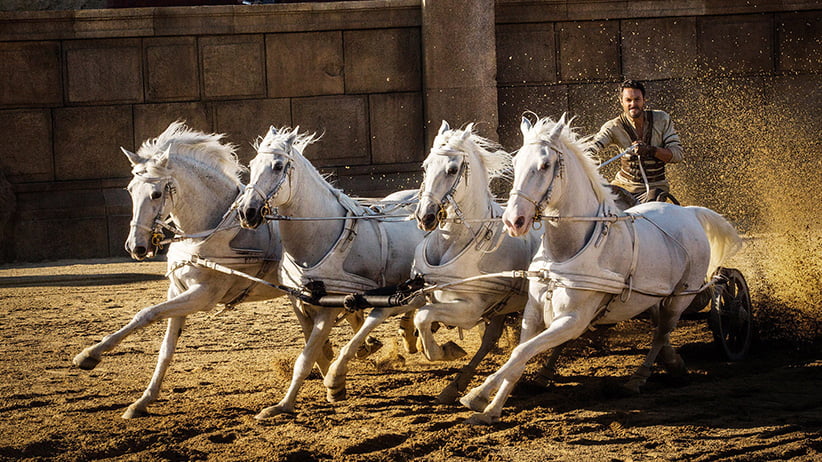 There have been many film versions of Ben-Hur, but there’s never been one aimed specifically at the Christian market—until now. The 1880 novel, about a Jewish man who ends up converting to Christianity after an encounter with Christ, became a popular silent film, an even more popular spectacular starring Charlton Heston, and a TV miniseries in 2010 co-starring Emily VanCamp. But those adaptations emphasized the secular elements of the story.

“We tried to stay away from that subject matter and tell a story that was highlighted by the famous chariot race,” says Canadian producer Michael Prupas, whose company, Muse Entertainment, co-produced the TV miniseries. “We co-produced the show with a company in Spain, which is, or used to be, a very Catholic country, but our partners in Spain were very anxious to reduce the amount of religious messaging.” Now, only a few years later, a new movie version of Ben-Hur is coming out, and the producers have no such fear of religiosity—though they might, if the box office returns aren’t good.

The most famous version of the story, the 1959 Oscar-winning epic, never showed Christ’s face, and kept religious elements out of most of the promotion. But the current version not only gives Jesus a prominent onscreen part, it has made him a significant part of the publicity in preparation for its August opening. There were reports that Rodrigo Santoro, the actor who plays Christ, got an audience with the Pope, and in June, the studio presented an exclusive excerpt from the film at a Christian retail conference in Cincinnati. Christian Market magazine reported that the producer Roma Downey (Touched by an Angel) and actor Morgan Freeman would appear at the screening to talk “about the Christian-products industry and the film’s role in changing hearts.” Hollywood in the 1950s respected religion, but today it’s a market niche all its own.

Movie companies are increasingly aware that there is a big appetite for Christian-themed films. Though the cycle of Christian filmmaking arguably began as far back as 2004, with the immense success of Mel Gibson’s The Passion of the Christ, it’s a big business lately: Scott Mendelson, a film industry analyst for Forbes, noted that by 2014 “Christian-themed religious pictures officially outnumbered comic book superhero films.” Some of these are small productions by specialty companies, aimed directly at self-identified Christians. “Most ‘faith-based’ films aren’t coming from Hollywood,” says Alissa Wilkinson, who teaches at the King’s College in New York City. “They’re coming from independent filmmakers and small production companies devoted to that market niche.” One of the biggest Christian hits so far came with God’s Not Dead, produced by Pure Flix, an Arizona-based company that aims to provide a Christian alternative to Netflix, including reruns of Highway to Heaven.

But Hollywood has gotten in on the act as well. The 2013 History Channel miniseries The Bible retold most of the Old and New Testaments in only 10 episodes, and drew 13 million viewers in the U.S. alone. That show and its follow-up, A.D.: The Bible Continues were produced by Downey and her husband, reality-show creator Mark Burnett (Survivor, The Apprentice), who have become major players in the field of mainstream religious-themed entertainment. Stars and producers are increasingly comfortable talking about their religious beliefs in the context of the movies they make. While promoting his thriller Captive, David Oyelowo (Selma) appeared at a faith-oriented conference, the Purpose Summit, where he discussed the film in terms of his own faith as well as the fact that the movie contained an unexpected message of redemption.

Some studios have even set up faith-based imprints. Last year’s hit War Room, a Christian drama that made a reported $73 million on a $3-million production budget, was released through Sony’s religious division, known as Affirm. Chris Stone, whose company, Faith-Driven Consumer, specializes in ranking businesses and products by their compatibility with the tenents of Christianity, says it’s a good sign that these movies are increasingly getting studio distribution: “The movie process is very complex, and as the better players are producing Christian or Christian-compatible movies, you’re getting a better product.”

So times should, in theory, be good for believers who want to see Christianity treated respectfully on the screen. But the boom in religious-themed moviemaking has been criticized as disappointing from an artistic standpoint. Wilkinson has written frequently about the weakness of movies aimed at religious believers, and she says that the most frequent response she gets “is something like relief; often people feel like they’re alone, or like something must be wrong with them, if they don’t like the latest Christian-market flick.” Believers criticizing religious movies for not being sophisticated enough is a minor cottage industry online: When the sequel to God’s Not Dead premiered this April, the blog Compassionate Orthodoxy published a post called “From Bach to God’s Not Dead: The Downfall of Christian Art.”

This may just be the usual downside of low-budget movies, religious or secular. Some of these films are made without much money, and often have simplistic stories where the religious characters are proven right about everything. “The problems with these films tend to range,” Wilkinson explains, “but the core issue is almost always that the writing is two-dimensional, a lot more interested in being ‘inspirational’ and ‘affirming’ than being challenging.”

God’s Not Dead, in particular, has garnered withering criticism for its premise, where a believing college student challenges and out-debates his atheist professor; the sequel has Melissa Joan Hart (Sabrina the Teenage Witch) as a teacher who is persecuted for mentioning religion in her class. Though the movies have made money, they seem to embarrass more sophisticated believers. Variety reported that when Oyelowo appeared at the Purpose Summit, he tried to make it clear that his movie wasn’t going to be “about someone who has it all together coming along saying, ‘This is the way to go. Give yourself to Jesus and your life is going to be fine.’ ” The perception is that too many Christian-oriented movies are exactly like that.

But among Christians, as with any group, there may be a disconnect between what elites want to see and what the larger audience likes. As an example of a good Christian film, Wilkinson points to Calvary, the 2014 film about a priest (Brendan Gleeson) dealing with the fallout of sexual-abuse scandals in the Catholic church: “Not only is it explicitly structured around Christ’s passion, but it explores some really important questions about sin, guilt, and Christian ministry.” But she admits that it was “not ‘Christian’ in a market-driven way.” Serious movies about religion are no more likely to be hits than most serious movies about any other subject.

That should theoretically provide an opening for Hollywood studios to provide well-made, populist entertainment with a religious bent, if only studios could figure out how to sell a movie to the modern Christian audience. Darren Aronofsky’s 2014 film Noah was well-received by critics for creating a personal, environmentally conscious take on the familiar tale, but got an unexpected backlash for the liberties it took with Biblical accounts. “There’s a whole lot of people who are fanatical over, let’s say, Harry Potter,” Stone explains, “and if the movie departed from it so much that it wasn’t recognizable to them, then that natural audience would likely fall away. And that’s what happened with Noah. Noah did not anger me; it simply wasn’t my story.” Wilkinson says movies like Noah or last year’s Biblical spectacular Exodus: Gods and Kings “should never have been marketed at the so-called ‘faith’ audience, who were always going to hate them since they took some imaginative and artistic liberties with the text.”

That doesn’t rule out the possibility that Ben-Hur might finally be the religious Hollywood film that breaks through. Wilkinson thinks it will have the advantage that “it’s not a canonical story,” meaning that audiences won’t find it objectionable if it departs from the original novel. It may help that the story of Ben-Hur offers sympathetic portrayals of people who don’t convert to Christianity; it’s not the kind of story that would turn off those who don’t share the hero’s beliefs.

Still, it may be that there’s no longer a place for mass-market religious storytelling. The classic Biblical movies, after all, were made in a more culturally homogenous era. If the new version of Ben-Hur doesn’t do well, that could increase the sense that religion is too divisive to be the foundation of a blockbuster hit — or at least, that Hollywood no longer knows how to manufacture one. “The problem is that studios think there’s a big button marked ‘Christian’ that they can push,” Wilkinson says.

At least the people who make God’s Not Dead or War Room know what their audiences want. Studios are trying to please everyone — and you don’t need a sign from the big guy to know how that usually ends up.