When Khrushchev came to America 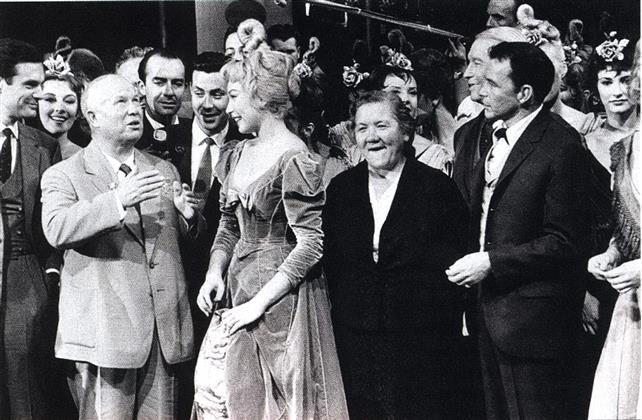 History, as Karl Marx’s famous dictum would have it, is supposed to be tragedy first time around, degenerating into farce only on its repeat swing. Hard then to say what the dour Marx might have made of his high-spirited fellow Communist Nikita Khrushchev and his 1959 tour across America. As described in journalist Peter Carlson’s K Blows Top (Public Affairs), even at the time the shambolic two-week affair struck many as a Cold War comic interlude, a kind of real-life rehearsal for Dr. Strangelove five years before the film. From our perspective, looking back over half a century during which East and West—thanks to MAD, that apt acronym for the doctrine of Mutually Assured Destruction—managed to avoid incinerating mankind, Khrushchev’s excellent adventure inspires not just laughter but nostalgia for a time when external threats did not come from shadowy organizations undeterred by the threat of retaliation. And for when the enemy had a sense of humour.

The visit must have seemed a serious event when first proposed. Khrushchev, who had slowly accumulated supreme power in the U.S.S.R. since the death of Joseph Stalin in 1953, may not have been as murderous as his predecessor. Nonetheless, he was devoid of diplomatic skills (“We will bury you”), thin-skinned, and ever ready to remind foreigners he had nuclear missiles at his beck and call. His would be the first-ever visit of a Soviet leader to America, and the prospect that he and U.S. president Dwight Eisenhower might, as the latter delicately put it, have a “mutually profitable informal exchange of views,” would have sounded hopeful to most Americans.

In the end, diplomatic progress was minimal, but in 13 days in September, Khrushchev managed to get stuck in a New York elevator, spark media riots in a San Francisco supermarket and an Iowa cornfield, ogle Shirley MacLaine on the set of Can-Can, and throw a Hollywood tantrum over being denied access to Disneyland. (That’s the particular outburst captured in Carlson’s title, taken from a newspaper headline—copy editors had great difficulty both in spelling “Khrushchev” and in fitting it into the space available; “K” and even “Krushy” often stood in for it.)

News of the visit provoked an uproar. After combing his files, FBI director J. Edgar Hoover estimated that 25,000 Americans wanted to kill Khrushchev. Still, plenty of others wanted him to drop by, meet the family, stay for supper—see, as the cliché would have it, the real America, and thereby learn to love it. Tennessee senator Estes Kefouver touted the Grand Ole Opry; an Atlantic City hotel offered free use of its penthouse (“two baths, kitchen and a Japanese houseboy”); the Apple Festival Parade in La Crescent, Minn., invited Khrushchev to drop by (“If you would like to enter a float,” the festival chairman wrote him, “please let me know”); Louis Armstrong thought “Mr. K” might like a jazz club: “He’s a cat, man,” Satchmo told a reporter, “a human being like anybody else.”

Eventually the advance men settled on Washington (White House state dinner), New York (addressing the UN), a luncheon at Twentieth Century Fox’s studios in Los Angeles, a visit to IBM in San Francisco, the Iowa corn farm of Khrushchev’s American friend Roswell Garst, a Pittsburgh steel mill, and a few days of talks at Camp David. New York’s highlight, at least for the tabloids, saw the Soviet dictator crawl out of a malfunctioning elevator in the elegant Waldorf-Astoria, his ample rump shoved from behind by Henry Cabot Lodge, U.S. ambassador to the UN and the diplomat in charge of this travelling circus.

While the East Coast had its moments, matters didn’t become truly memorable until the tour reached Hollywood. The film world turned itself inside out over its distinguished visitor. Stars frightened to be seen eating with a Communist screenwriter fought to get into Fox’s 400-seat commissary to dine with a Communist dictator. Only a few Cold Warriors, including Ronald Reagan, turned down the invitation, while Marilyn Monroe was dragooned into attending. Her studio bosses told her, according to the actress’s maid years later, that Russians knew only two things about America—Coca-Cola and Marilyn Monroe—and that she had to show up, in her “tightest, sexiest dress.” Others who came included Frank Sinatra, Judy Garland and Gary Cooper. (After the meal, Khrushchev, who had spent a lot of late nights watching Westerns with Stalin, an insomniac aficionado of the genre, had a long conversation with Cooper, an Oscar-winner for High Noon.) To counter Soviet denunciations of U.S. racial prejudice, black stars like Nat “King” Cole were also invited, making the luncheon Hollywood’s first integrated A-list party ever, according to one contemporary journalist.

It all went well until LAPD chief William Parker, spooked by a tomato tossed at Khrushchev’s car (it missed, splattering the chief’s vehicle instead), announced that he couldn’t guarantee security if the Soviets went ahead with a side excursion to Disneyland. So Lodge called it off, and a small volcano started building within his guest. After 45 minutes of rambling, post-lunch remarks, Khrushchev’s face grew red as he turned to the topic of Disneyland. “What is it? Is there an epidemic of cholera? Have gangsters taken hold of the place? What must I do, commit suicide?”

His audience, as accustomed to egocentric temper tantrums as any in the world, was unfazed; the visitor himself seemed calm afterwards as he toured the Can-Can set, watching male dancers slide under the skirts of female dancers and emerge clutching what appeared to be their red panties. Perhaps he was being a good guest, or merely happy that he had met Monroe. (“He looked on me the way a man looks on a woman,” she later said. And what, her maid asked, did the star make of the dictator? “He was fat and ugly and had warts on his face and he growled.”) But afterwards, when Khrushchev was embarrassed by being photographed grinning goofily at MacLaine, he denounced Can-Can as decadent bourgeois pornography, telling reporters that “mankind’s face is more beautiful than its backside.”

The rest of the Los Angeles leg went no better. Anti-Communist remarks from right-wing Republican mayor Norris Poulson provoked another bulging-vein outburst, a public threat to go home and ramp up the arms race. That one did scare Khrushchev’s audience: “You could see the fuses of nuclear rockets sparking,” wrote Harrison Salisbury in the New York Times. But again K calmed down. Poulson had “tried to let out a little fart,” he told Lodge, “instead he just s–t in his pants.” The American was glad to get out of town, and even happier that San Francisco began well, with an incident-free visit to IBM. Too bad, then, about the supermarket.

America’s capitalist cheerleaders had been angling all along to get their visitor into a supermarket, the very icon of U.S. abundance, to show up Soviet rationing and scarcity. Now they had their wish as Khrushchev and a cadre of bodyguards sauntered into Quality Foods. Unfortunately, the bodyguards, congenitally disturbed by the presence of unauthorized persons—in this case bewildered shoppers—locked arms in a circle around their charge. That in turn blocked photographers and cameramen from getting their shots, and the media riot was on. One photog hopped a stack of butter packets, squishing most; another climbed shelves filled with jars of instant coffee, knocking them to the floor in a cascade of glass splinters; a third jumped on a meat counter only to be tackled by an incensed butcher yelling “get off my chickens!”; another, even more desperate than his fellows, simply crashed through the deli counter, and stomped across the salami and cheese, to shoot Khrushchev chatting with the shell-shocked store manager.

By the time the circus reached Iowa, everyone—with the notable exception of Khrushchev himself—was showing the strain. Two of Lodge’s underlings had collapsed; one locked himself in his hotel room and took the phone off the hook. Reporters, never the most gracious of travellers, were fighting with cops. The stage was set for the next media brawl when the tour arrived at Garst’s farm. What bound Garst and Khrushchev together was a shared, almost mystical, belief in the beauty, splendour and wonder of corn. They had been pals since 1955 when Garst first visited the U.S.S.R. to sell his hybrid varieties. They were very much alike: ham actors to the core, capable of eating, drinking and talking—especially about corn—for hours.

One key difference, though, was that Khrushchev was aware, more than many a contemporary democratic politician, of the importance of playing to the media, especially the TV cameras. Garst not so much. The sight of journalists trampling his corn as they closed in on Khrushchev sent him into a frenzy. First he kicked the nearest vandal—the Times’ Salisbury—in the shins, then he began throwing wet silage at the rest. But these were the combat-tested veterans of the Battle of Quality Foods, and they held their ground long enough to snap photos of a bug-eyed Garst and a smiling Khrushchev.

The tour eventually made it back to Washington for its almost forgotten main purpose, the talks at Camp David. Little was accomplished, but at least it was done in due sobriety. As Khrushchev flew home, dazed survivors in the press corps were left groping for words to describe what had happened. Associated Press reporter Seth Pett’s summation of the supermarket fiasco, expressed in the idiom of the day, could well have stood for the entire two weeks: “It was like happy hour in a manic depressive ward, like the year of the locusts, like, crazy, man.”