Why baseball lends itself to philosophical speculation 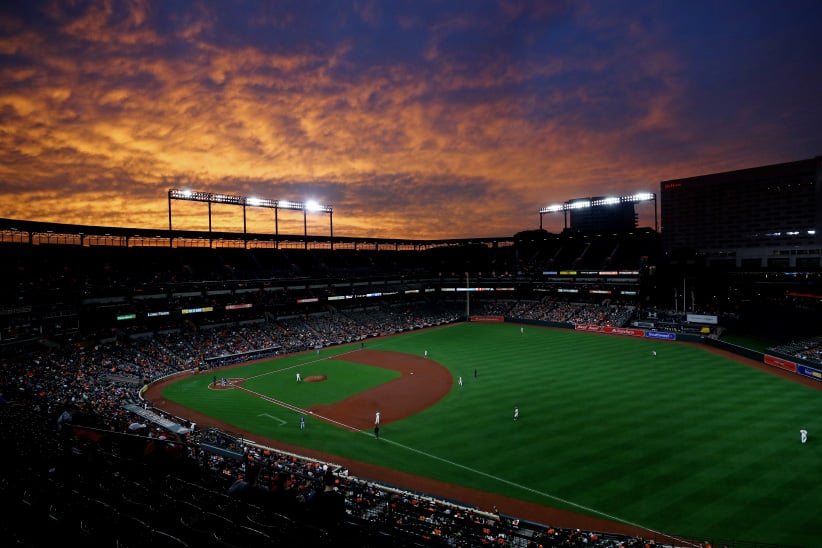 The sun sets during the game between the Toronto Blue Jays and the Baltimore Orioles at Oriole Park at Camden Yards on Wednesday, April 5, 2017. (Alex Trautwig/MLB Photos/Getty Images)

Mark Kingwell is curious about a lot of things. The philosopher and cultural critic’s wide-ranging interests have lead him—and his readers—through 17 books. Among them are Catch and Release: Trout Fishing and the Meaning of Life, his 2003 memoir of a family fly-fishing trip that eddies into thoughts on manhood, boredom and the fine art of the cast, and 2008’s Concrete Reveries: Consciousness and the City, an exploration of personal identity in the urban environment. His latest, Fail Better: Why Baseball Matters, hits the shelves just in time for the start of the season. In his usual chatty and discursive voice, Kingwell incorporates his lifelong love of the game with notions of contingency—thoughts on how to live a beautiful life within the context of his own inabilities on the diamond. Whether strikeout or error, he writes, no failure is total. It is, after all, a long season.

Q: Is there something about baseball that lends itself to philosophy?

A: I think so. The volumes of sports literature are disproportionately tipped towards baseball writing. It’s alone among team sports in its refusal of the clock. It tells its own time in outs and innings. Really, it’s a game of pauses, longueurs, contemplation. So, sure, it lends itself to philosophical speculation.

Q: You have provided my all-time favourite definition of baseball:

A:  It’s a huge shift from a game like football, which is about territory, about gains and losses of territory. Sean Penn in The Thin Red Line says “war is property.” And football is war by other means.

READ MORE: What if stat nerds were given the keys to a pro baseball team?

Q: It reminds me of that George Carlin routine: football has its long bombs and the blitz; it’s analogous to war. But baseball is all about going home. Your want to be safe at home.

A: Right. It’s a journey around the bases, sometimes a perilous one. Bart Giamatti [the late former president of Yale and also commissioner of Major League Baseball] wrote that it’s a return to where you started, where you will be well-received by others, in this case your teammates. There’s something Odyssean about that.

Q: And yet nothing can happen till the pitcher throws the ball.

Q: Sometimes they have too much time, right? They start to think too much. You mention Mackey Sasser in the book. A catcher who developed a problem throwing the ball back to the pitcher. I remember guys like Steve Sax and Chuck Knoblauch, All-Star second basemen who got “the yips.” All of a sudden, they couldn’t make the easy throw to first. They’d throw the ball away.

A: Philosophy and psychology don’t understand this yet. What are the limits of automatic action? I quote Aristotle in the book: habit helps and executes excellence. In baseball, you learn by repetition, by muscle memory, so when the action starts, you rely on automaticity. You want to offload things to automaticity, but interruptions from the conscious self can become self-defeating. You boot an easy play. There’s this long-standing joke that managers always tell their players “Don’t think too much out there!” The point is once you’ve mastered technique, then thinking is the enemy.

Q: That sounds antithetical to a philosopher.

A: To a Western philosopher, maybe. But Eastern wisdom speaks exactly to this kind of idea. There’s the Taoist notion that broken flow is conscious flow. There’s a scene in The Natural, when Robert Redford is invited to a meditative session and he wants nothing to do with it. It’s all mind games to him. The movie is set in the 1930s, but even today, players would be resistant to it.

RELATED: Jason Kendall tells us how baseball is really played

Q: And yet there is something so meditative about baseball. It requires a lot of patience.

A: I quote McLuhan—mostly because he was wrong, but he said baseball was doomed in the television age because the public’s collective response is to violent spectacle. But timing and waiting are the essence of baseball.

Q: For a team game, the focus is on individual confrontation.

A: Yeah, these are superb athletes with unbelievable quick-twitch muscles. The pitcher throws a 90 mph fastball, an 80 mph curve. Maybe a change-up. He’ll mix those up to fool the batter and the batter might hit the ball hard, but…

Q: But still not get a hit.

A: You can do everything right and still fail. The best hitters fail seven times out of 10.

Q: What about pitcher? Is the corollary that they succeed 70 per cent  of the time?

A: That’s the lovely paradox. While the failure rate is very high for batters, it is possible to pitch a perfect game [27 batters faced, all 27 retired].

Q: Unless you’re Armando Galarraga. You write about his non-perfect perfect game: he got the first 26 outs and appeared to get the last one, but the ump blew the call.

A: Exactly. This was the high-point of his professional life. And it was taken away from him. He was very gracious about it. I would’ve pulled my hair out.

Q: We can’t forget the role umpires have.

A: They have such a big role in the game. Other team sports might need a ref to judge an in-bound catch or whether a player broke the plane of the goal. But in baseball, the umpire is involved in every play, in every pitch thrown. They are the ultimate arbiters. One bad call and the whole narrative of the game can change.

Q: What was it you wrote about the old ump Bill Klem?

A: Someone asked him about the difficulties calling ball and strikes. He said, “It ain’t nothing till I call it.”