The wonderful weirdness of St. Vincent

Now a Grammy winner, St. Vincent could change the game for women with her unapologetic oddness 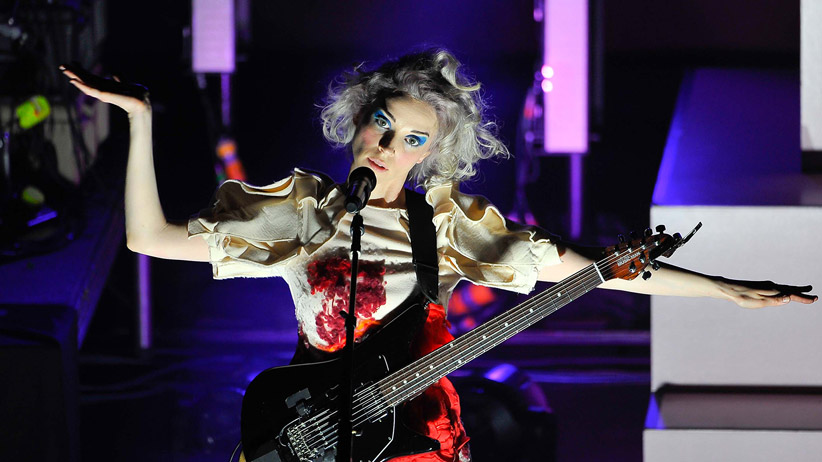 In mid-May, St. Vincent stood on the storied Saturday Night Live stage and sang about social media obsession. Her face was haloed by a corona of striking dyed-grey hair; her arms arced above her guitar in a rhythmic, robotic choreographed dance. If Twitter was any indication, people couldn’t look away from their screens: “That was trash noise that only got worse and worse as I watched it #StVincent #SNL” read one. Another viewer was even more blunt: “St. Vincent is too weird for me. There. I said it.” To be fair, there were raves about her captivating performance too. But, for the most part, the compliments came from existing fans; to the masses, St. Vincent (née Annie Clark) is utterly perplexing. So it was delightfully unexpected to see her name on the list of nominees for the Best Alternative Album award at this year’s Grammy awards.

Yet even within the “alternative” grouping, she’s an outlier. No woman has won a Best Alternative Album Grammy since 1991, the year the category was introduced. The inaugural victor was Sinead O’Connor, whose sophomore release, I Do Not Want What I Haven’t Got, beat out signiﬁcantly odder offerings by Kate Bush and Laurie Anderson. Recent nominees like Neko Case and Fiona Apple situated their weirdness squarely in their music, says Lindsay Zoladz, pop critic for New York magazine. Clark, by contrast, “is playing with the image of femininity in a very deliberate and conscious way.”

In a nutshell, if you’re a woman in pop, you can look weird but make conventional music (Miley Cyrus, Lady Gaga) or you can be beautiful and sound weird (Fiona Apple or Joanna Newsom, who offsets the kookiness of her harp-led folk whimsy with fashion shoots and gossip items about her marriage to Andy Samberg). It’s tremendously difficult to pull off both.

When Clark emerged as a solo artist in 2007, her conventional good looks put her in the latter category, and earned her unwanted—and often creepy—attention, particularly from male fans. Since then, she’s been methodically playing with her persona, experimenting with grotesque imagery in her lyrics, choosing increasingly unsettling artwork for her albums (on 2014’s self-titled St. Vincent, Clark resembles an imperious cult leader) and scripting and choreographing her live shows.

Clark’s pointed strangeness is neither a marketing strategy nor a coping mechanism. Rather, it’s an artistic choice, one she comes by naturally, having collaborated with such eccentrics as David Byrne, with whom she released the joint album Love This Giant in 2012. Still, it’s an unusual path for a Grammy-nominated female performer—unless, of course, your name is Björk. Indeed, Björk (who’s been nominated several times for Best Alternative Album) is one of the few artists Zoladz points to as a spiritual antecedent for St. Vincent—only “because she’s carved out her own space, which is so rare for a female solo artist . . . and has exerted a similar control over her artistic vision.”

Critics often question what qualifies music as “alternative.” Many of Clark’s fellow nominees, like blues-influenced guitar-rock stalwart Jack White and blues-inﬂuenced guitar-rock duo the Black Keys, readily ﬁll stadiums and could just as easily be in the running for Best Rock Album. Her inclusion, then, may be good not just for women, but also for “alternative” music. “I think that women have more of an ability to destabilize categories,” says Zoladz, “especially in genres from which they’ve been historically excluded.” At the very least, it’s a flicker of hope that the mainstream may make space for true female weirdos.