Around the end of 2020, the mushroom lamp was everywhere. You can thank TikTok and Instagram's algorithms for turning our homes into paint-by-numbers. 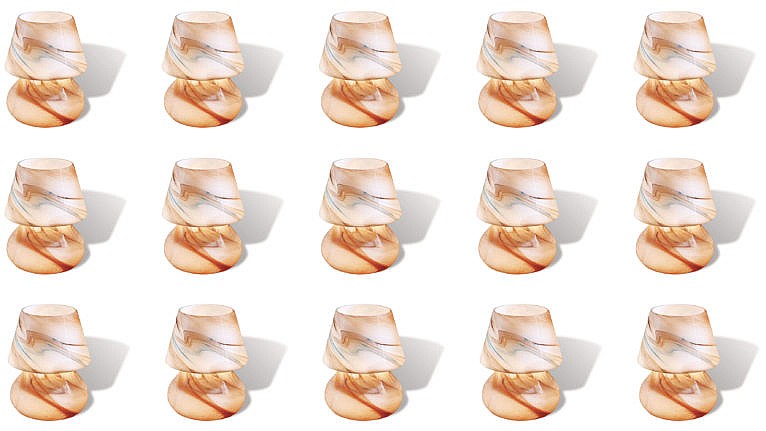 “Why do all apartments look like this now?” A friend has done a housing swap in Montreal and sends me a photo of the place she’s staying in. A monstera plant sits in the window and the furniture is mid-century modern teak—combined with the detritus of everyday, it looks like a scene from any mildly successful 2021 bachelor’s life. Perhaps there is a Marcel Breuer chair or Togo sofa in the mix, and sometimes the furniture is a replica. It often does not matter if the item is authentic, as long as the particular aesthetic has been achieved.

Over the past decade, there have been colours, eras and even objects that have influenced design simply through our use of social media. During the pandemic, the trend cycle has accelerated. Trend forecasters like WGSN couldn’t reference runway shows and street style to make predictions, and retailers were forced to look elsewhere so as to act in a timely, responsive manner. An executive at Bloomingdale’s told the New York Times that “Instagram and TikTok have filled that void, and it kind of changes the dynamics again about speed and being reactive because things have a shorter lifespan.”

To keep afloat, companies must produce items that are guaranteed to sell. Enter the Vetri Murano mushroom lamp, a small glass lamp that emits a soft glow and was originally popularized in the 1970s. Murano glassware takes its name from an island off Venice that has been the site of glass production since the 13th century. The production style of Murano glass still adheres to the techniques of its forebears, and the objects are considered collector’s items with a luxury price tag.

Sometime around the end of 2020, the mushroom lamp began proliferating, much like its namesake. It was seen all over Instagram and TikTok in the homes of top influencers like Marie von Behrens (1.1 million followers) and Ximena Moral (329,000 followers). According to Etsy’s 2021 trend report, the search for mushroom lamps was up 371 per cent from the same period in 2020. Now, an authentic Murano mushroom lamp could run you about $600 on the resale market, where in a pre-pandemic world it was easy to purchase one for under $100. Anna Daliza, a buyer for Oggi Home, an Instagram-based homeware boutique, now owns two but says that, before the pandemic, “I did not know one person who cared to own a Murano glass mushroom lamp.”

As demand for the lamps soared, big-box retailers took note and created their own versions. Ikea’s Höstfest lamp is made of polypropylene plastic and is battery-operated, and has been sold out online since being featured in TikToks and articles as the perfect “dupe”—the Gen Z term for an inexpensive replica, more often than not of marginally worse quality.

READ: My obsession with a serial liar

Along with mushroom lamps, Etsy reports that travertine marble, “wavy, squiggly, curvy decor” and checkered prints are also in high demand. When I open my Instagram Explore page, it is almost a guarantee that these items will be present on my feed, and often for sale, even though I’ve never shown any interest in—let alone bought—anything like them. “All those objects become part of standardized templates that are then algorithmically governed,” says Greg Elmer, a professor of professional communication at Ryerson who specializes in new media and surveillance. Once someone uploads something, even if it is completely original user-generated content, it is “clustered into like-minded images.” This can be through location, colours or even poses. Elmer believes algorithms not only group objects, aesthetics and images, but the users themselves. The purpose, he says, is so they can be commodified. “The individual becomes part of the product or becomes part of that datafied media system.”

The more we see these items and engage with this content, the more algorithms will feed us more of the same. Even across a small subset of people, being surrounded by the same things often causes us to ask, “Why don’t I have one?” The demand increases because of the sheer visibility the algorithm offers, but it also creates a uniformity of aesthetics that is difficult to break away from. “Homogeneity is a direct result of insecurity, bred by capitalism, and forcing consumers to buy more, buy new and buy the same. While in reality, the smartest way to shop, decorate and enjoy what one owns is to be completely unique,” says Daliza. Often these online trends can feel like paint-by-numbers—resulting in a hollow level of taste. The fun and spontaneity of developing a personal style becomes harder to separate from the noise. The next time you’re drawn to a lamp at a thrift store, do yourself a favour and keep it off-line. You’ll get much more joy basking in its light in real life and away from a screen.

This article appears in print in the September 2021 issue of Maclean’s magazine with the headline, “One for all.” Subscribe to the monthly print magazine here.