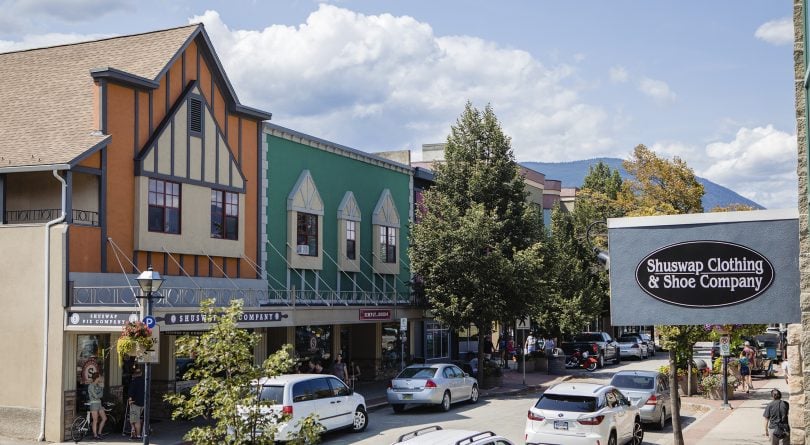 Jennifer Broadwell and her family were ready to say goodbye to San Antonio. After living with the city’s traffic, stress and limited green space for years, they wanted to trade it for a small town that instead offered access to mountains, lakes and safe streets where the children could play. As her husband finished up studies to become an orthodontist, a colleague who had settled in Alberta urged them to look north of the border.

Alberta, however, had a major drawback: it’s cold. Next, they investigated the B.C. Interior: getting closer. Finally, they received an email alert for an orthodontic practice for sale in a small British Columbian town with a funny name: Salmon Arm.

After a few visits to the town with a population of 19,000, the Broadwells were smitten. In 2013, they packed up the kids, then aged five and seven, and made the big move to the little mountain town in the Thompson-Okanagan region, about an hour and 15 minutes east of Kamloops.

“I tell my friends from home that it feels like we’ve gone back in time for the quality of life for our children, to ride bikes in the street, to walk to the neighbour’s house, to be outside all day,” Broadwell says. “In all seasons, it’s beautiful here. There’s not a bad-looking time of year. We quite like to be outside year-round, and this certainly affords us the opportunity to hike and mountain bike and ski and be on the water in the summer.”

READ: This is the best city to live in Canada

Broadwell’s experience reflects the results of our inaugural Best Communities in Canada ranking. We compared 415 municipalities across the country; more than three-fifths of the top 50 are towns with fewer than 40,000 people like Salmon Arm (the sixth-best place to live in the country and the top place in B.C.). Contrary to the popular image of the struggling small town, these communities rose to the top of the ranking because of their high incomes, strong population growth and access to thriving regional economies. These places are all either within driving distance of a larger population centre or are hubs of local economic activity in their own right. They’re supercharged small towns, and residents don’t have to compromise—they’ve got access to the same amenities a suburb might offer, the natural splendour of a rural area and the opportunities of an urban centre.

Anyone trying to decide where to live in Canada faces a paradox. Toronto and Vancouver create most of the country’s high-paying jobs, but the cost of owning a home in those cities has spiralled out of reach for most people. The average Toronto family would have to save its entire household income for 8.8 years to buy a home outright, with Vancouver homes eating up 12.7 times the average household income, according to data from Environics Analytics used to compile our ranking. Toronto came in 19th place on the ranking, with Vancouver faring significantly worse. It landed at 112, largely because of the dubious distinction of being the least affordable community we ranked. These cities may be powerhouses of the Canadian economy, but they’re difficult places to live if you don’t make a high-powered salary.

Supercharged small towns offer an attractive alternative, both for highly paid urban workers willing to endure a long commute in exchange for tranquility and a bigger house, as well as those looking to work in the town itself.

It is true that small towns in rural, remote areas are struggling with issues such as slow job growth, lack of internet connectivity and difficulty accessing health care. People working in Canada’s remote rural areas earn about 30 per cent less than workers in urban centres, according to a 2015 report from Strengthening Rural Canada.

But less remote small towns—like the ones at the top of our ranking—don’t face these challenges. Vicki-May Hamm, mayor of Magog, Que., has spent years combatting the perception that all small towns are struggling. Her community—the 110th-best community in Canada and the 10th best in Quebec, according to our ranking—may be small, but it’s an hour from Montreal, two from Quebec City and 30 minutes from the U.S. border.

“Magog has all the services I need—the hospitals, the schools, the kindergartens, the local businesses. I have almost everything I need here without the inconvenience of traffic, of pollution,” says Hamm, a past president of the Federation of Canadian Municipalities. “If, for example, your head office is in Montreal, and you only have to go once or twice a week, why wouldn’t you live here next to the lake?” 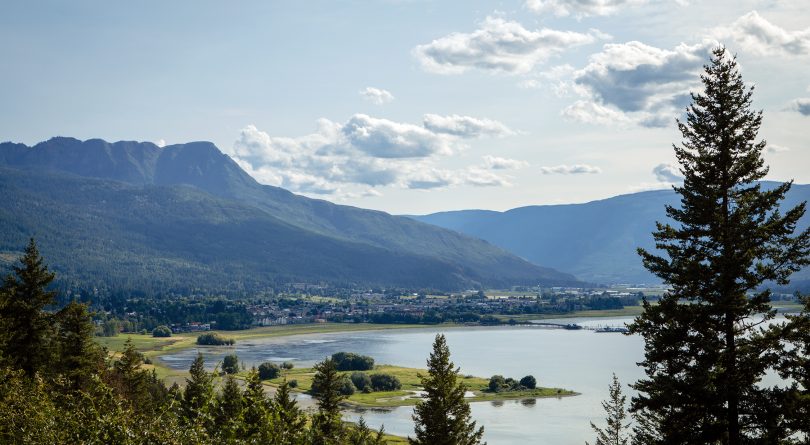 Proximity to a lake is not part of our ranking methodology, but low crime, community engagement and affordability are—all factors where these supercharged small towns tended to do better than their big-city neighbours. Many intangible things that determine quality of life can’t be quantified and measured, but a lot of tangible things can be.

Using data provided by Environics Analytics as well as publicly available figures from a variety of sources, we weighted the categories based on how important each would be to the average person and ranked each municipality accordingly. The strength of the local economy and affordability are the heaviest-weighted categories at 20 per cent of the overall score each, followed by access to health care, weather, commute, crime, taxes, population growth, culture and access to amenities.

Ontario and B.C. communities dominate the top of the ranking, with Ontario towns and cities accounting for 28 of the top 50 and B.C. accounting for 16. Municipalities in those two provinces are at an advantage because of B.C.’s and Ontario’s strong economies and great weather (for Canada, anyway). Ontario also has the shortest health care wait times in the country and B.C. has low sales and income taxes.

Most of the small towns at the top of the ranking are in the Greater Golden Horseshoe or on Vancouver Island, putting them within driving distance of Toronto or Victoria. A willingness to commute longer and longer distances in exchange for an affordable home is a contributing factor to the success of these communities, says Alan Arcand, associate director of metropolitan economics at the Conference Board of Canada.

“There’s a lot of data to suggest a disproportionate share of job gains are happening in the major cities in Canada. But they’re also the places that are unaffordable to live,” he says. “So it doesn’t surprise me that people are living near, or on the periphery, of the major metropolitan areas.”

However, census data on commuting patterns suggest few people living in these small towns are driving to work in the big city. Among the eight high-ranked small towns within driving distance of Toronto, only Simcoe County’s New Tecumseth is a big commuter town, with 44 per cent of its labour force working in the big city. The share of people in those regions who work in their hometowns ranges from one-quarter to 65 per cent.

The community where nearly two-thirds of residents work within its borders is Collingwood, an Ontario town on the southern shore of Georgian Bay perhaps best known as a gateway to the Blue Mountain ski resort. Like many of our top small towns, it offers a mix of strong local economic growth and access to outdoor recreation. The 2016 census pegged Collingwood as the 24th-fastest-growing community in Canada located outside a major metropolitan area. 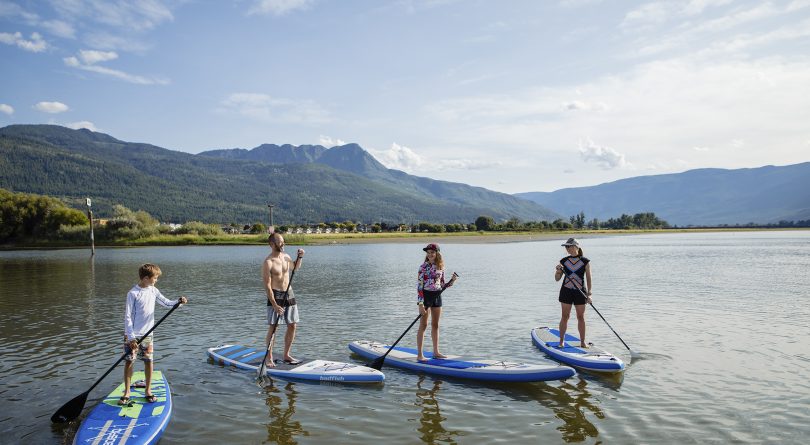 In the B.C. Interior and Coast’s supercharged small towns, the share of people who work where they live is even higher than in Ontario. Larger centres like West Kelowna tend to be home to more commuters, with smaller and more remote communities like Salmon Arm, Terrace and Prince Rupert keeping the majority of residents within city limits for work.

New residents of these small towns may not be looking to commute to the big city so much as to flee it entirely. Corie Griffiths, director of economic development with the regional district of Central Okanagan, says 8 to 10 per cent of her region’s population has typically come from Vancouver and the Lower Mainland. Over the past three years, it’s been more like 15 to 20 per cent.

MORE: 25 best communities in Canada. See if your city made the cut

“It’s a trend we’re seeing across Canada as well as in the U.S., where smaller towns are growing due to the housing crunch in urban centres,” Griffiths says. “Where the interior of B.C. has that advantage is the comparative affordability paired with the job opportunities that exist in the region.”

Broadwell, the Texan transplant now living in Salmon Arm, couldn’t agree more. She likes her current lifestyle much better than life in San Antonio: “There was just a different energy to how you lived. It was a less free feeling,” she says.

Instead of spending her days stuck in traffic, her commute to drop the kids off and get to work takes a total of about 10 minutes. She gets her dairy, eggs and vegetables from local farmers and knows her neighbours, baristas and even the mayor personally.

“It’s awesome to be involved in community events and know the people at the events, to be able to call people by name,” Broadwell says. “It’s just such a feeling of connectedness that’s hard to beat.”

This article appears in print in the September 2019 issue of Maclean’s magazine with the headline, “Best Communities in Canada.” Subscribe to the monthly print magazine here.