In Pablo Escobar's old stomping ground, a well-connected Toronto company is growing weed to supply the global demand for cannabis products. This time it'll be legal. 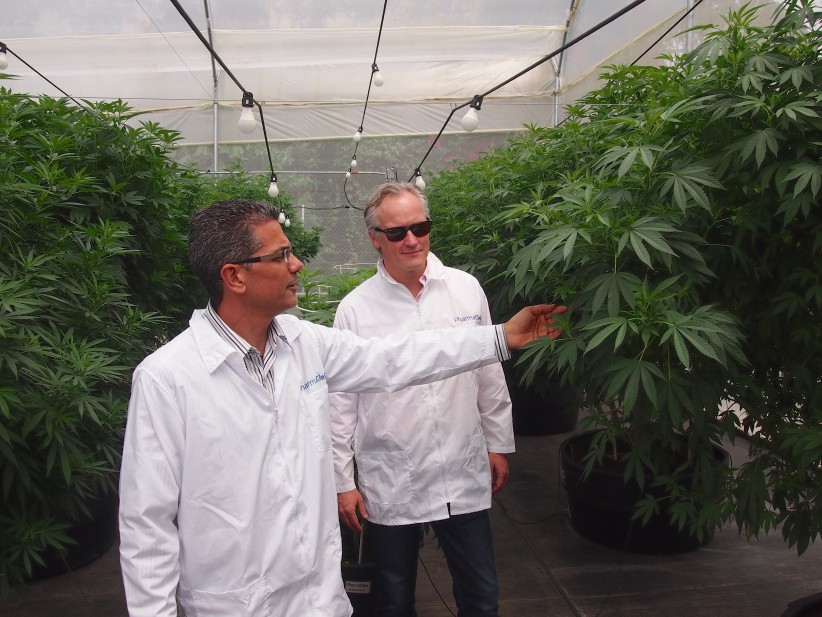 Security is in-your-face tight all around the future cannabis oil factory, conceived as the world’s largest. Armed guards, electronically controlled gates, tall fences, high-resolution cameras: the place is breach-proof. It isn’t surprising, given the location and what’s going on inside.

Workers are gearing up to produce massive amounts of marijuana. Colombian gold. Not the same stuff you might have encountered in high school, decades ago. This will be legal, liquified into oil—all of it government approved.

The facility is Canadian-controlled, its Toronto-based parent company, PharmaCielo Ltd., run by a board of globe-trotting executives and investors, several of whom are from Big Tobacco and Pharma. But the heart of the operation is here in Colombia, about an hour’s drive east of Medellin, once considered among the world’s most dangerous cities.

Things have improved since Pablo Escobar and other cocaine kingpins held sway here. The local murder rate has plummeted, the economy has diversified, the middle class has grown.

Medellin is now a bustling centre of innovation and legitimate commerce. In the suburbs, in the verdant, rolling hills around Rionegro, brash new residential developments and shopping centres compete for space with farmland; much of the latter lies hidden under sheets of translucent polycarbonate. The further one travels from the centre of town, the more one notices these shimmering greenhouses.

It’s a florist’s field of dreams. Cut flowers remain a huge part of the Colombian export economy. The glorious arrangement gracing your dinner table? It might well have come from this region. But that could change, if legal cannabis production takes hold here.

After a brief negotiation and some radio back-and-forth, a gate slowly opens and visitors are directed into the plantation. More greenhouses, row after row of plants. Chrysanthemums, for now.

In about a year’s time, when it’s expected all the required permits will have been issued by the Colombian government, various strains of cannabis will replace the pretty flowers. Some 20 hectares of prized marijuana mother plants will be cultivated here. Cuttings will be snipped, then planted in other greenhouse locations, where they will be raised in native soil and harvested by contract farmers, some of whom have been growing marijuana illegally their entire lives, often for the benefit of Revolutionary Armed Forces of Colombia (FARC) guerrillas, who would impose taxes on marijuana farmers as a means to finance their violent campaigns against the national government.

That decades-old conflict has calmed down, with peace negotiations underway between FARC and Colombian officials. Rather than punish illicit marijuana growers and force them to raise different crops, the country’s health ministry has decided to pull their knowledge, skill and labour from the shadows and into the legitimate economy, allowing them to continue growing under license.

The goal is supervised production of medicinal-grade cannabis oil for local and international markets. It’s a bold move for a country that for decades was under the thumb of violent drug cartels and FARC guerrillas. But Colombia is moving in step with other countries, recognizing that cannabis has medicinal and economic value, that it can be exploited and taxed just like any other commodity, such as cut flowers.

“We have found a friendly space here,” says Marcelo Siqueira, a Brazilian-American horticulturalist who runs PharmaCielo’s Rionegro operation. “The government believes Colombia has paid its price in blood and treasure with the war on drugs, that it’s time to move on. But it’s sensitive. The violence associated with the drug trade is ingrained in peoples’ minds. ”

He walks me from his spacious office into a greenhouse, where workers are tilling soil. Rain begins to fall; it hammers on the polycarbonate cover, forcing us to practically shout to be heard. PharmaCielo was among the first foreign companies to inquire about growing legal weed in Colombia, Siqueira says. It began the process of acquiring necessary permits last year. It now has permission to grow up to 20 cannabis plants for medical and scientific purposes, and has a license to process cannabis oil; the company is waiting for permits to cultivate.

Unlike other countries where dried marijuana flower is legally exchanged, Colombia has decided to allow only the sale of cannabis oil, for medicinal use inside the country, and for export to countries that allow it. The government chose this path to better to regulate and track production and trade, and to add value to the product. If all goes as planned, marijuana grown and harvested by PharmaCielo’s contract farmers will be packed into armed transport carriers and returned to the company’s Rionegro facility, where it will be processed into oil, then shipped to markets inside the country and to legal markets around the world, including Canada.

That’s the broad pitch PharmaCielo makes to investors. And it seems to have won over a bunch of them. According to PharmaCielo president and CEO Patricio Stocker, the company has raised US$30 million, all privately, since it was created in 2014 by two entrepreneurs, one American and one Colombian. Early enthusiasts included U.S. venture capitalist Jim Rogers, best known for having co-founded with George Soros the legendary Quantum Fund, and Anthony Wile, a Canadian cannabis industry promoter.

According to documents filed with Canadian securities regulators, other shareholders include Toronto lawyer David Yun, Vancouver accountant Kenneth Phillippe, and Elco Securities Ltd., registered in the Bahamas. A private offering last year attracted 199 individual investors from 34 countries, including the U.S., the U.K., Hong Kong, the United Arab Emirates, and Qatar, Clearly, the PharmaCielo message got around.

PharmaCielo is now led by an experienced management team and directors recruited from various segments of the business world: two former executives with Philip Morris Inc., the tobacco giant; a former Bayer MaterialScience executive; and David Attard, vice-president in charge of corporate strategy and product development at President’s Choice Financial, a Loblaw Companies Ltd. subsidiary. Stocker, for his part, used to lead DaimlerChrysler’s operations in Colombia. He says PharmaCielo incorporated in Canada in order to leverage the country’s sophisticated financial sector and its reputation as a strictly-regulated producer of legal cannabis. “It’s a financial place, a place to raise capital, and the laws are already there,” Stocker says. 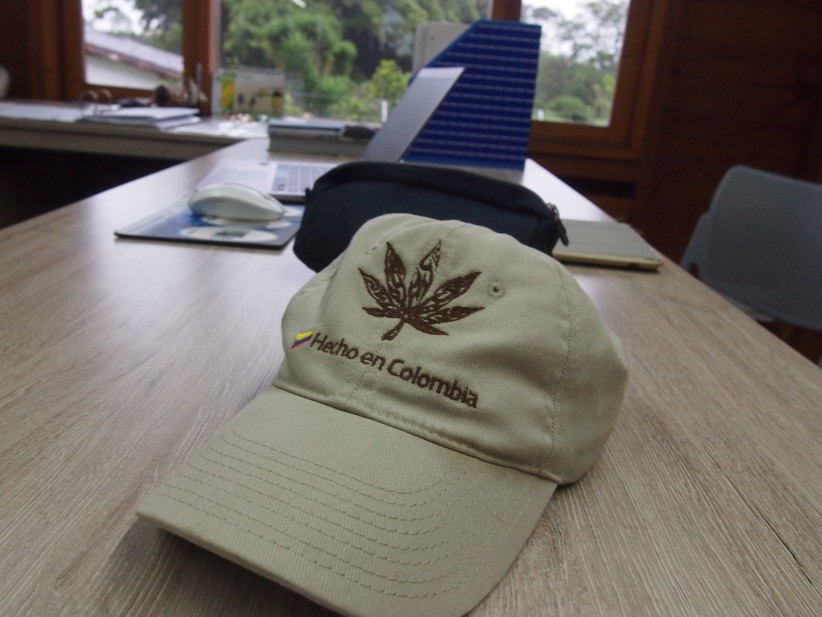 Smart move, notes Jason Zandberg, a Vancouver-based analyst who covers the sector for PI Financial Corp. “Canada is definitely starting to look like a world leader” in terms of cannabis investment and regulations, he says. “We certainly haven’t seen the last of the capital raised in this sector.” But the sizzle in PharmaCielo’s story is really Colombia, where all of its sticky product will be made. In enormous quantities, at a very low cost.

They are staggering, the numbers being bandied about. Eventually, PharmaCielo hopes to put 1,000 hectares of Colombian farmland into cannabis production, Stocker says. That’s over 100 million square feet, enough to yield at least two million of kilograms of dried marijuana flower per year, and as much as 250,000 kilograms of oil.

Thanks to its warm climate, abundant rainfall and 12 hours of daylight all year, Colombia has natural advantages for growing marijuana. Factor in low labour costs and the company figures it can produce dried flower at 10 cents a gram, one-tenth or better the cost of production in marijuana-friendly countries such as Canada, where plants are grown indoors–at great effort–by 50 federally-licensed companies for the legal medicinal market. “The costs and the carbon footprint associated with cannabis production in Canada are absurd,” says PharmaCielo’s Siqueira. “It’s like growing coffee beans indoors. It can be done, but should it? Energy consumption, water diversion, pesticides, water contamination, these are already issues.”

It explains, in part, why there are fewer than two million square feet of government-sanctioned marijuana under cultivation in Canada right now, with experts predicting a significant shortage of product in 2018, when recreational marijuana becomes legal under Bill C-45, the proposed Cannabis Act. Zandberg thinks it will be years before licensed producers in Canada will be able to meet consumer demand; in the meantime, he says, the black market will fill gaps in supply.

Unless, of course, companies such as PharmaCielo manage to convince authorities to accept their foreign-made products into Canada. While Stocker says his company’s first priority is supplying medicinal products to Colombians, its long-term focus is “on the global market.” He mentions Canada in the same breath as Australia and Europe, where recreational use may also soon be made legal.

RELATED: Peace is winning. Even in Colombia

Zandberg, the analyst, raises some doubts. He wonders if cannabis oil from Colombia—”a country with lower standards than Canada”—would have the same quality as locally-made products. Stocker dismisses that argument. The bigger obstacle could be regulations around medicinal pot, and the proposed Cannabis Act. Zandberg says the Canadian government already puts local indoor growers “through so many hoops that it’s not realistic to think it will open the market to (foreign) producers, at least in the short term. There would be lawsuits.”

And according to Health Canada, under the proposed Act it will be “illegal to import into or export from Canada cannabis and cannabis products except under very specific circumstances. The import and export of cannabis or cannabis products for medical and scientific purposes will continue to be allowed with the proper permits issued by Health Canada…The Canada Border Services Agency, the Royal Canadian Mounted Police, and local police forces will continue to work together to uphold laws governing the cross-border movement of cannabis.”

In other words, Canada isn’t flinging the door wide to foreign cannabis producers. But it has opened it, just a crack, enough for PharmaCielo to anticipate the day it ships its first barrels of low-cost, “all natural” Colombian oil to the north. To the place it has incorporated, where it hones its message and raises its cash. And where, quite frankly, its stuff may be wanted most.

Corrections: a previous version of this story identified Marcelo Siqueira as an American-Argentinian; he is Brazilian-American. It also said Pharmacielo was awaiting permits to process cannabis oil when in fact it has obtained a processing licence and is awaiting cultivation permits.