A family that’s too big to fail? 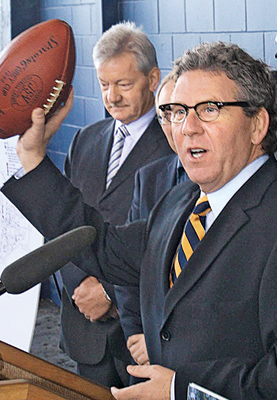 In the span of 10 years, Winnipeg’s Asper clan saw much of its $3.5-billion investment in the newspaper business wiped out. Canwest’s television properties have been hemorrhaging viewers and cash for years. Now, after succumbing to its crushing debt load, the Aspers’ company is being carved up and sold off. Not exactly a track record to instill confidence. But when the Aspers, avid free-market proponents, need money these days, they’ve found a willing source of funds—Manitoba taxpayers.

Last week, Manitoba agreed to a deal with David Asper’s Creswin Properties that will see it cough up funds to build a new $115-million stadium for the Winnipeg Blue Bombers. The money comes in the form of a $90-million loan and a $15-million grant. If Asper repays the loan by 2016 with proceeds from a planned mall next door, he’ll gain control of the CFL team. If not, taxpayers in Manitoba, which faces a $545-million deficit this year, could wind up holding the bill.

Even before the stadium deal, local governments were heavily into another Asper project—the Canadian Museum for Human Rights, a dream conceived by patriarch Izzy Asper before his death. In addition to $120 million in capital and operating funds from Ottawa, Manitoba is on the hook for more than $50 million. Not surprisingly, critics have panned the terms of the stadium deal. “[Premier Greg Selinger] is out of control and running around like a backup quarterback throwing political Hail Marys,” said Opposition Conservative Leader Hugh McFadyen. “It appears Mr. Selinger is turning the government into a lender of last resort for projects that nobody else wants to finance.”

Manitobans had better hope the family’s business track record improves. With so much taxpayer money on the line, the Aspers are looking like they’re too big to fail.