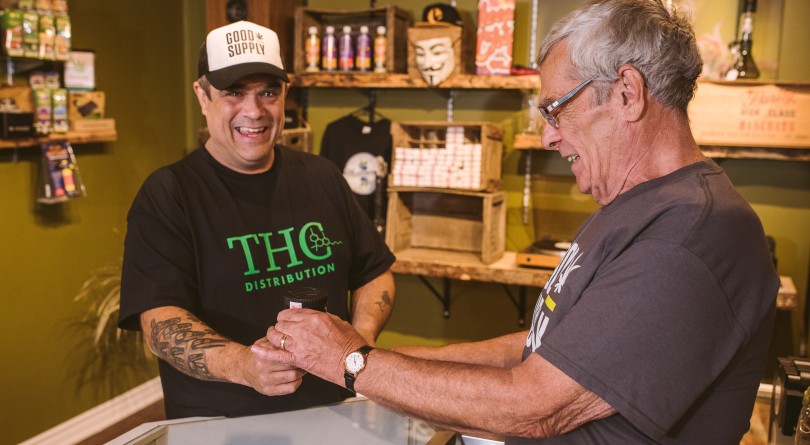 Before Don Clarke of Pouch Cove, Nfld. could become the first person to buy legal recreational cannabis in Canada, he needed to borrow $80.25 in cash.

It’s not that he was short on funds. Clarke just returned from a European vacation and spent the last of his cash at duty free. The 71-year-old figured he would buy seven grams of weed—either DNA Genetics’s Lemon Skunk or Aurora’s Banana Split—with his debit card. But his son, Thomas, quickly set him straight: there would be plenty of competing claims around St. John’s, where several retailers also opened Wednesday at 12 a.m. NDT, itching to make that historic first sale. If Thomas wanted to declare himself first in the country, he couldn’t afford any delay due the transaction crawling its way across the Internet.

Thomas—who says his full name is Thomas Herb Clarke—opened THC Distribution in Portugal Cove-St. Philip’s, Nfld., at midnight, too. (His given middle name his George, but the 43-year-old father of three has, in every sense, embraced Herb.) And thanks to its time zone, the province had a head start on the rest of Canada when recreational marijuana officially became legal.

That’s why Thomas had set it up so that father and son would be at the cash register at the stroke of midnight to make the transaction as quickly as possible—cash-only for sale number one.

Why does Don get the honour of becoming a Canadian first? “My dad’s my favourite person to smoke with,” Thomas replies.

The historic policy shift was lost on neither Newfoundlanders nor the handful of retailers selected by Cannabis NL, a branch of the Newfoundland and Labrador Liquor Corporation tasked with regulating cannabis, to sell marijuana on opening day.

The Natural Vibe, a health-food store in St. John’s, opened up the natural wellness component of their retail store for a party at 11:30 p.m. on Oct. 16 with a ribbon adorning the cash register designated for cannabis sales. There was a countdown, “like it’s the New Year,” says store owner Megan Kennedy, before making that first sale.

As of Monday afternoon, the only thing she was waiting on was product. But a shipment arrived well in time to sell to their first customer on Wednesday, Jackson McLean, a local who works as an assistant manager for The Seed Company. McLean’s crumpled receipt shows his $7 purchase happened at one minute after midnight.

Just made the FIRST EVER legal recreational cannabis purchase in CANADA (notice the 12:01AM on the receipt). So proud to be a part of this historic moment with @TheHealthyVibe #legalcannabis pic.twitter.com/9D5tutmDM2

Canopy Growth, who also were vying to make the country’s first sale on Water Street in St. John’s, didn’t have to worry about supply problems on Day One. For the company previously named Tweed Marijuana Inc., (Tweed Inc. is now a wholly owned subsidiary of Canopy Growth) it’s one of the advantages is being both retailer and producer.

“I don’t think we’ll have every single variety that makes up the full line-up over the course of time, but we’ll have a good lineup to meet everybody’s preferences,” says the company’s co-CEO Mark Zekulin.

The company flew both CEOs from Ottawa specifically to commemorate the moment and meet with customers who lined up outside the night before. “A picture of the occasion should do an incredible job,” Zekulin adds.

And while he was coy when asked who will have the honour of being the first customer, a company spokesperson let on that Bruce Linton, Canopy’s founder and co-CEO, would make the company’s very first sale just after midnight to his co-CEO counterpart.

“Bruce is more of a seller,” Zekulin explains wryly. “I’m more of a buyer.”

(Update: In the end, Linton sold the first Canopy product to a local cannabis advocate named Ian Power, who lined up outside early enough to become their first customer—seconds after midnight with the tap of a debit card.)

RELATED: Is it too late to cash in on the pot stock boom?

Back in Portugal Cove, Don Clarke says cannabis should have been legalized 50 years ago. He remembers the first time he smoked weed. It was back in the late 1960s while he was in Quebec. “We could get all kinds of product,” he says. “The most potent was Thai stick weed. I’m sure it’s still out there because it was one of the best.”

He can’t remember, however, the first time he caught his son smoking weed. “I can remember some missing,” he laughs. “I think Thomas was 16 and he was given a severe reprimand—more for taking what didn’t belong to him.”

Thomas says his parents were very accepting of him smoking at home. “It prevented me from going out drinking and getting in trouble with my friends.” He admits they probably wished he didn’t smoke as much as he did. His friends gave him the nickname Thomas H Clarke (or THC for short, a play on words for the other THC, tetrahydrocannabinol, the psychoactive element in marijuana).

But his journey from user to seller got him into trouble with the law. “I got busted selling hash and spent 30 days in jail,” he remembers. “It scary being a 19-year-old going to Her Majesty’s Penitentiary. I don’t have a violent bone in my body.”

Thomas eventually stopped selling and shifted towards advocacy work in getting marijuana legalized. But when Prime Minister Justin Trudeau announced that cannabis would become legal, Thomas got his paperwork in order to open his own independent shop.

“This is the biggest policy shift of our time,” he says. “Before this, women got the right to vote. Slavery was abolished. This is the kind of thing we’re dealing with. No one has seen a change like this in Newfoundland since Confederation.”

Thomas says he’d have $75,000 worth of product ready to move on opening day—and anticipated he’d be sold out well before the weekend. When asked if he’s doing anything else to make the special occasion, he notes he’ll be running the shop with his wife, his best friend and his best friend’s wife. After he made his first sale to his dad at midnight, family and friends were on hand to become his next customers. So too was a woman he just met days ago who’s living with multiple sclerosis and told Thomas how thankful she is to live right around the corner from his shop.

“To be the first person in Canada to make a recreational sale—and be surrounded by loved ones while I do it—is special enough,” he says.