Inside Cervélo: the Canadian maker of some of the world's fastest bikes

The race is on to make the company, which outfits some of the top riders, a global brand

When the Canadian cyclist Ryder Hesjedal rode to victory in the Giro d’Italia (the world’s second most important race behind the Tour de France), he did so aboard two Toronto-made machines: the Cervélo P5 time trial bike and the Cervélo R5ca road bike. This win vaulted Hesjedal to the first rank of cycling’s elite and put Cervélo at the top of a list it was already near the head of, that being the makers of the world’s finest high-performance bicycles.

But cycling glory isn’t the first thing that comes to mind when approaching Cervélo’s Toronto head office and plant, an unremarkable building that looks like it ought to house a discount furniture warehouse. It’s not until you pass through a cardkey-guarded door that the real operation reveals itself. Banks of technician’s desks line the office floor—much as you’d imagine in a Silicon Valley start-up—but it’s what’s hanging from the ceiling that particularly captures the eye. Row upon row of bicycles hang from heavy-gauge wire: early road bikes, carbon-frame bikes, the 2008 Tour de France winning bike. Hesjedal’s Giro bike will soon be hanging here. In the hint of an air-conditioned office breeze, the machines seem to sway like giant wind chimes.

A staggering amount of research and tech development has gone into the bikes. Head aerodynamics engineer Damon Rinard was lured away from Trek bicycles nearly four years ago by Cervélo CEO Phil White (who co-founded the company with Gerard Vroomen) because they shared one simple passion: to make riders go faster. “It’s so enlightening and liberating,” says Rinard, sitting in Cervélo’s boardroom. “Because at most places you’re making decisions for a thousand different reasons, but here we make decisions based on one thing: will it make our clients faster? That’s it.”

This adherence to a corporate mantra that doesn’t include the word “profit” might seem like a risk, but it seems to have worked out, at least so far. Cervélo is a private company that does not release financial data (some external sources put its annual sales near the $30 million mark), but there are clearly enough people lining up to buy the high-end bikes—which can cost as much as $20,000, depending on how you customize them—that the company was recently bought by a Dutch conglomerate, Pon Holdings BV. Cervélo makes bicycles coveted by the world’s cycling elite; the question now is whether a corporate master can help turn it into a luxury global brand like Ferrari or Rolex.

White was a student at McGill University in the early ’90s when he ran into Vroomen, a visiting engineering student from the Netherlands. The two shared a passion for bike design and were soon roommates who had turned their apartment into a kind of miniature factory, testing carbon fibres, building frames, stacking boxes of supplies beside their beds. “We were tech geeks,” he says, laughing. “Mostly we were just focused on the aerodynamics. We didn’t care about anything else. We lived on bread and soup.” When their early experiments began to yield some interesting results—such as finding that carbon frames did in fact reduce drag and increase aerodynamic performance—they formed a company. Vroomen came up with the name Cervélo, which is a portmanteau of the words cervello (Italian for brain) and vélo (French for bicycle).

The design and construction processes for high-end bicycles are becoming so complicated that some engineers move back and forth between bike design and Formula One car racing. Cervélo’s specialty is “about how we approach the equation of cycling power,” says Rinard. Taking a blue marker, he writes on a giant whiteboard: P=A+G+RR+E. “On the left is the supply side: power. On the right is the demand side, namely all the things a rider has to overcome, all the sources of resistance: aerodynamic drag, gradient (meaning up or downhill), the rolling resistance of the tires, and E, or eta, a Greek letter we use to summarize the mechanical efficiency of the drive chain and bearings like the wheel, pedals and crank.”

Focusing on aerodynamic drag, he explains, is where Cervélo gets its edge. He and his staff show a computer screen with a racer avatar on a bike overlaid on a grid. The virtual racer begins knifing through a wind; the resulting airflow ripples around and behind him like a series of torn flags. Every time a change is made—such as altering the shape of a section of the frame (and Cervélo has pioneered a unique boxier tube shape)—the computer calculates how much drag is being created and where, which allows them to adjust and shave a second here or there off a 30-minute time trial. “We calculated that Cervélo’s aerodynamic approach saved Ryder 70 seconds,” says Rinard of the Giro race Hesjedal won by just 16 seconds.

Technological sophistication alone does not create a successful company, of course. White and Vroomen knew what they were doing with a carbon frame, but building a company is a different matter. In the early days, they didn’t pay themselves, and by year three were only taking $30,000 in salary. They did low-budget ads in which they were the pitchmen. They were early adopters of social media and were the first company to do audio and video blogs from the Tour de France. They were on YouTube as soon as it went live. As the marketing budget expanded, slightly, Cervélo pioneered internally produced documentaries like Beyond the Peloton, which highlighted the life of a professional cyclist. These marketing approaches were unique in the relatively conservative bike manufacturing industry, and it set them apart despite their relatively small sales figures in the early days.

Increasing success in the early 2000s led to one of the best and worst things that ever happened to Cervélo—it signed with Team CSC to supply bikes starting in 2003, most visibly for the Tour de France. The only problem was that it wasn’t just about bike and rider. Team CSC’s Ivan Basso won the 2006 Giro d’Italia but was soon embroiled in the “Operación Puerto” doping investigation. He was banned from the sport for two years and sacked by the team leader, Bjarne Riis, a former Tour winner (who then confessed himself that he’d been doping in his 1996 Tour win). Post-2006, Cervélo worked with CSC and, eventually, its new team, Garmin-Cervélo (now known as Garmin-Barracuda), to create an anti-doping program. Jonathan Vaughters, the team’s general director, is one of the sport’s leading anti-doping advocates, though the entire sport, at the pro level, has much work to do to overcome public perception of widespread cheating.

The future of Cervélo looks both bright and uncertain, primarily due to being recently acquired by Pon. Why did Cervélo choose now to sell? “We’ve been stretched from 2008,” says White, referring not just to the economic meltdown but to Cervélo’s decision to start its own professional test team in 2008 (which has since been discontinued). “This just seemed like the right opportunity at the right time.”

Yet, given Cervélo’s obsession with quality above profit, there is reason to wonder if reporting to a corporate master will blunt the drive for aerodynamic perfection. “I suppose it’s true that the guys with the purse strings ultimately make the decisions,” White responds. “But we chose Pon from many suitors precisely because they understood our brand and understand that our value lies in enhancing what we do, not compromising it. And having their deeper pockets will allow Cervélo to really grow.”

Getting to what White calls “a whole new level” will mean improving sales and increasing brand recognition. They’ve got plenty of material to work with: the Tour de France is coming up and Hesjedal is expected to contend. Dozens of athletes will be seeking medals aboard Cervélos at the London Olympics—over 40 rode Cervélos in Beijing, resulting in 10 medals, a record for a bike manufacturer.

More podiums would be great for Cervélo, but White and his team will be content doing what they’ve always done. “We’ve always looked at things from a kind of geeky engineering standpoint,” White says. “I don’t think that’s going to change.” 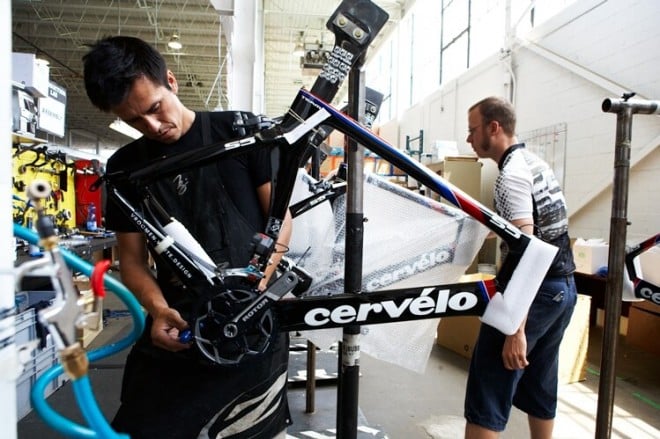 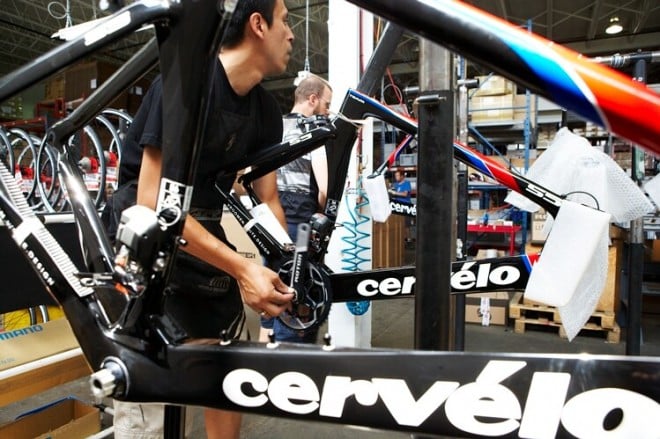 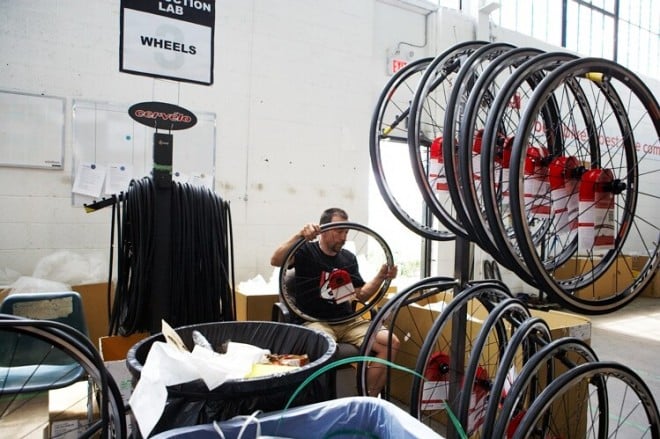 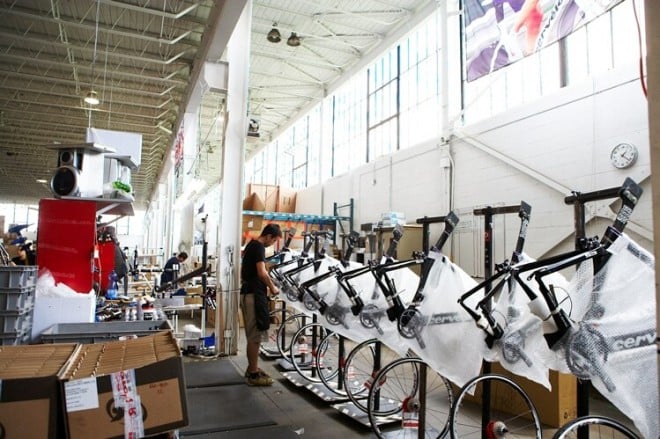 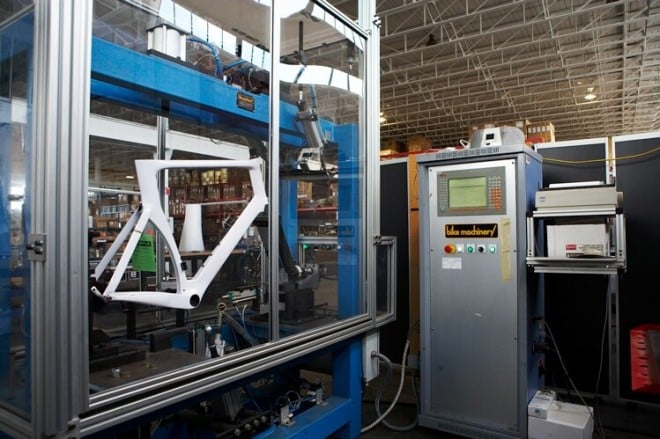 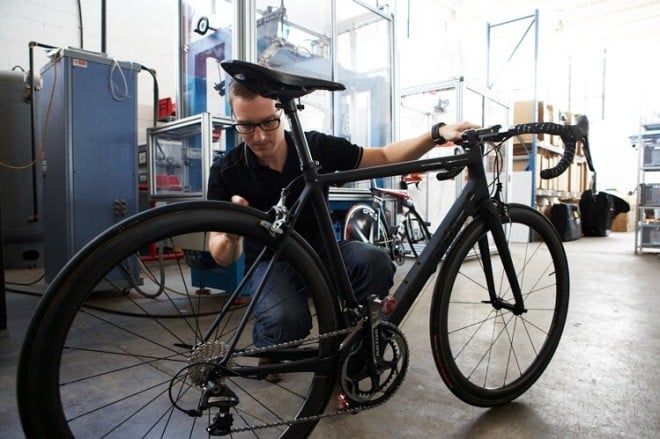 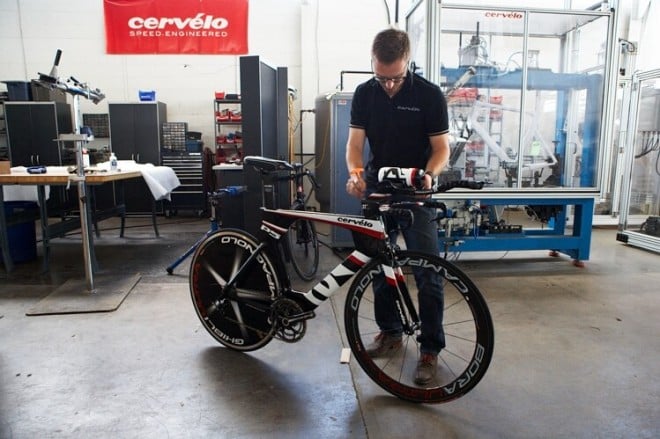 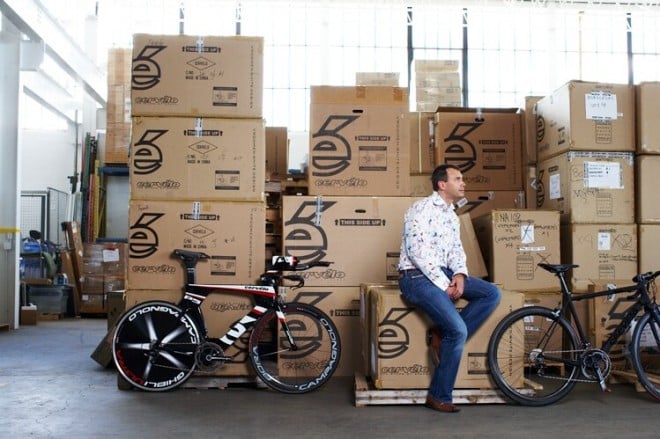