Is there such thing as a mercy takeover?

Is there such thing as a mercy takeover? Fairfax Financial and an unnamed group of investors are proposing to buy BlackBerry for $9 a share, or about US$4.7 billion, in a deal that one analyst has described as a “take-under.” The plan, according to Fairfax CEO Prem Watsa, is to refocus BlackBerry on its corporate roots without the pressure of quarterly earnings targets.  “We can deliver immediate value to shareholders, while we continue the execution of a long-term strategy in a private company with a focus on delivering superior and secure enterprise solutions to BlackBerry customers around the world,” Watsa said in a statement.

Watsa, who holds about 10 per cent of BlackBerry’s stock, stepped down from BlackBerry’s board last month when it was announced the company was redoubling efforts to find a buyer for all or part of its business. It’s unclear whether co-founder and former co-CEO Mike Lazaridis is also involved with the buyout proposal. Previous reports suggested that Lazaridis, who held about six per cent of BlackBerry’s stock as of earlier this year, had been talking to private equity partners about a similar going private transaction.

At the moment, all of the buyout consortium’s members are financial players, according to Watsa. However, he told the Globe the group could welcome a strategic investor into the fold if the opportunity presented itself. The terms of the deal also give BlackBerry the right to shop itself around to other potential buyers for six weeks, although several analysts have expressed doubt that another bidder will emerge.

Shareholders are no doubt relieved that the carnage in RIM’s shares has been halted. They dumped the stock last week after BlackBerry revealed it would take a write-down of nearly $900 million in the second quarter thanks to a growing inventory of unsold phones (shares opened Monday morning at $8.47). BlackBerry also announced plans to cut as many as 4,500 employees, or about 40 per cent of its workforce, in an effort to stay afloat. It’s a long fall from grace for a company that once dominated the global smartphone market, employed more than 20,000 and boasted a share price as high as $150.

For BlackBerry fans, the future continues to be murky. The company’s new BB10 devices, though impressive from a technological standpoint, have failed to excite consumers. And it’s no longer clear that BlackBerry’s once iron-clad grip on the corporate market can be counted on to revive the company’s fortunes. Where once employees begged their bosses to equip them with a status-bestowing BlackBerry, these days most employees, from the mailroom right up to the CEO’s corner office, demand permission to send and receive work emails on their iPhone or Android-powered device, forcing corporate IT managers to fall in line. Turning back the tide will be extraordinarily difficult for BlackBerry, privately held or not. 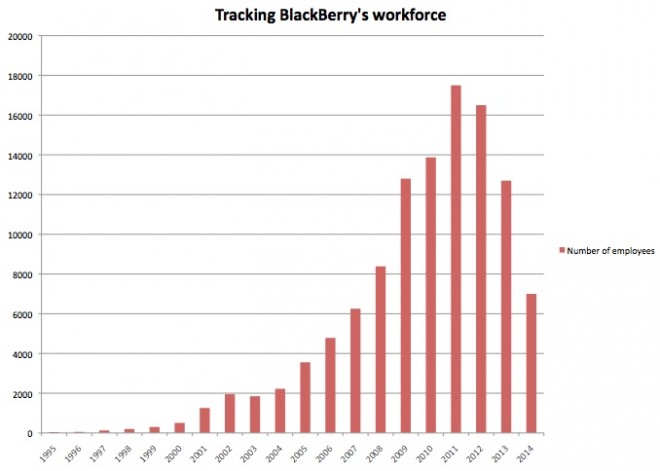