Porter expansion gamble not so risky

CEO Robert Deluce may have a few tricks up his sleeve yet, writes Chris Sorensen 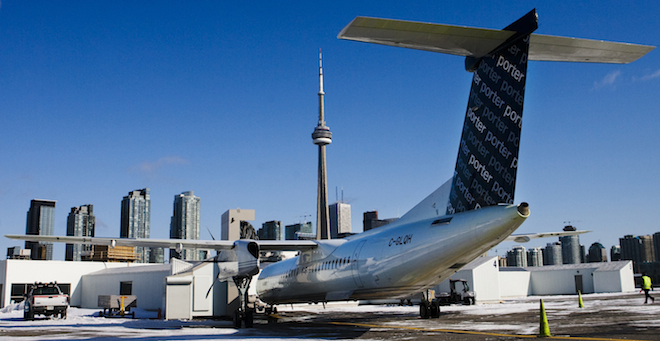 When the news first broke that Porter Airlines was about to announce a conditional purchase of 30 of Bombardier’s new C-Series jets, which could be used to service destinations across North America and effectively make Porter Canada’s third national airline, many assumed CEO Robert Deluce intended to fly them out of airports in Montreal or Ottawa—or possibly Toronto’s Pearson. That’s because Porter’s main hub at Toronto’s island airport currently prohibits commercial jet aircraft under a decades-old agreement signed by the City of Toronto, Ottawa and the Toronto Port Authority, which oversees the airport. Plus, the runways at the island are currently too short to comfortably handle the C-Series, designed to compete with the smallest jets made by Boeing and Airbus.

But that’s not the way Deluce does business. He’ s an extremely cagey operator—not unlike the airline’s raccoon mascot—and he knows that going up against Air Canada and WestJet on an equal footing is a recipe for bankruptcy. On the other hand, flying longer-haul routes out of  Billy Bishop Toronto City Airport—to Vancouver, Calgary and Los Angeles, among other places—gives Porter a huge competitive advantage since the island is within spitting distance of Toronto’s downtown (whereas Pearson is about 40 minutes away in Mississauga) and Air Canada’s presence there is strictly limited (Porter controls most of the take-off and landing slots thanks to a sweetheart deal with the port authority), while WestJet doesn’t operate there at all. And, right on cue, Deluce today revealed that he will indeed attempt to have the ban on jets on the island repealed and the runways lengthened.

Opening up the tripartite agreement to accommodate Porter’s expansion promises to spark a vicious political battle. Toronto’s former Mayor David Miller successfully ran for office in 2003 on a campaign that opposed the further development of the airport, arguing that it would negatively impact efforts to redevelop Toronto’s then largely industrial waterfront. Other opponents argued that Deluce wouldn’t be satisfied with a small, regionally-focused operation at the island, and would eventually push for a bigger, more disruptive operation—a fear that turned out to be spot-on. Not surprisingly, then, several city councillors have already spoken out against Deluce’s latest plans.

But here, too, Deluce is making an astute calculation. Unlike Miller, Toronto Mayor Rob Ford has made it clear he’s a Porter fan, as have the federal Conservatives. And the port authority has been on Porter’s side since Day 1. Nor does it hurt that Porter is buying from Bombardier, a Canadian company that’s received its fair share of government support in the past. Most importantly, there’s little evidence to suggest Porter’s presence at the island since 2006 has made Toronto’s waterfront a less desirable place. It certainly hasn’t stopped thousands of people from snapping up pricey units in the huge condo towers that have been built within earshot of the airport’s runways. And if those people aren’t worried about planes zipping by their floor-to-ceiling windows, Deluce no doubt reasons, why should anyone else be?

Though speculation about Porter’s future has swirled ever since it shelved its IPO plans in 2011, Deluce’s latest gambit suggests he has a few tricks up his sleeve yet.