With the Bolt, GM is essentially admitting that Tesla's Elon Musk got it right 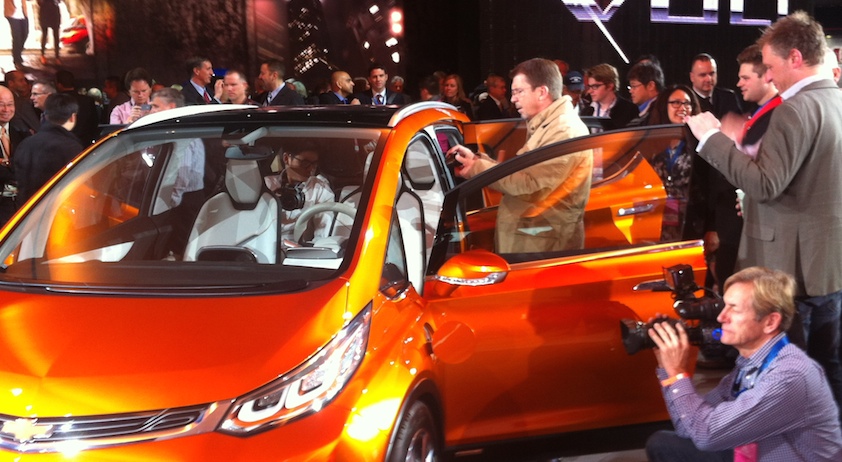 With sales up and gas prices falling, 2015 is already being heralded as the year power and performance returned to the Detroit auto show. The industry, now a half decade away from the dark days of 2009, was back to its old tricks in the newly renovated Cobo Center, with all sorts of throaty muscle cars, burly pickup trucks and super-charged sports cars spinning away on their pedestals.

But while it’s true that the auto industry has largely regained the swagger it lost in 2009—car sales in the all-important U.S. market hit 16.5 million last year, the highest since 2006 (in Canada, meanwhile, sales hit an all-time record of 1.85 million)—among the more interesting developments at the 2015 North American International Auto Show involved a car that requires no gasoline at all: the all-electric Chevrolet Bolt concept.

Unveiled on Monday, the Bolt is designed to travel up to 320 km per charge and will cost US$30,000. By comparison, GM’s existing stab at the electric car, the $35,000 Chevy Volt, on sale since 2010, can only travel about 60 km before its gasoline-powered back-up engine kicks in. Even the redesigned Volt, also revealed on Monday, only gets about 80 km on an electric charge. “This is truly an EV for everyone,” GM CEO Mary Barra said of the Bolt, as she paced back and forth onstage in front of hundreds of journalists. “For most people, this can be their true daily driver.”

GM’s decision to build a purely electric car signals both the automaker’s commitment to the segment and its concern about Elon Musk’s Tesla Motors. Though still very much a niche player, Tesla has captured the imagination of investors with its sleek, high-end Model S sedan, which sells for around $60,000 and boasts a range of of up to 425 km, thanks to its giant battery pack.

Tesla is also working on a smaller Model 3 compact that’s expected to cost $35,000 to $40,000, its first attempt at a truly mass-market vehicle. The Bolt, which is styled more like a crossover and resembles BMW’s i3, is being aimed at the same potential buyers.

With the Bolt, GM is essentially admitting Musk got it right. GM brass previously thought it was too risky to build a pure electric vehicle. Not only are giant lithium-ion batteries expensive and difficult to manufacture, but GM believed drivers would be plagued with “range anxiety,” thanks to a shortage of places to plug in their new rides. The automaker’s solution was to build a car with a smaller battery pack that ran purely on electricity for short trips, but could switch to a gasoline-powered generator once the battery was depleted. But the Volt failed to capture the imagination. Volt sales totalled just 18,805 vehicles last year (GM once hoped to sell 60,000 a year). By contrast, Tesla moved about the same number of its Model S sedans during the same period, despite the car’s much higher price tag.

Mark Reuss, the head of global product development, says the Bolt concept represents a step forward for the entire electric car segment because it helps address consumers’ chief concerns with electric vehicles—they don’t travel far enough on a charge and cost too much. “I don’t think anyone is selling a 200 mile-range EV in the market today for $30,000.” However, he added that consumers also need some time to get used to the idea of electric motoring. Whereas most drivers are now conditioned to keep their eye on the gas gauge while on the road, the mindset of an electric car driver is completely different, he says, having more to do with finding a place to plug-in overnight. He cites the example of his daughter, a Volt driver, who experiences the opposite problem when in a conventional vehicle. “She always runs the car out of gas.” If there’s anything Reuss doesn’t like about the Bolt concept, it’s the name. “I didn’t do that. Let’s leave it at that,” he said.

As for Tesla, it  remains to be seen whether the upstart electric car company can maintain its momentum as gas prices fall and consumers stop worrying about fuel economy. And it’s not as though there aren’t plenty of other shiny new vehicles—both conventional and electrified—for consumers to choose from, with automakers scheduled to unveil some 40 brand-new cars, trucks and SUVs in Detroit. Bob Lutz, GM’s former vice-chairman and “car czar,” who played a key role in championing the Volt, recently called Tesla “a fringe brand,” and noted that Tesla’s total production to date is about the same as what Ford and GM churn out in a single day. “So it’s filled with a lot of hype,” Lutz said of Tesla’s lofty stock price.

Maybe so. But, given where GM was just six years ago—on the brink of bankruptcy and churning out far too many gas guzzlers as fuel prices spiked—it clearly isn’t taking any chances.