Encyclopedia of the oil crash: D is for dutch disease

...and Dutch Disease (problem, or not?) View this and more in our encyclopedia of the oil crash 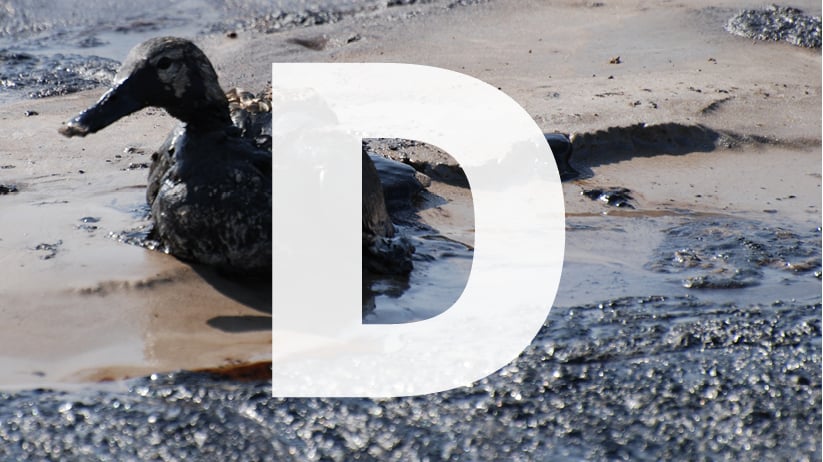 On April 28, 2008, Todd Powell, a senior wildlife biologist with the Alberta government in Fort McMurray, got the call. On the line was a contractor working for Syncrude, one of the oil sands’ biggest producers. A huge flock of ducks—1,600 birds in total—had landed on a pool of bitumen at the company’s site, and they weren’t shaking off their feathers and flying away. Powell rushed to the scene of the worst wildlife disaster he had seen in two decades in the field. “It was clear that it was pretty bad, and that we were probably not going to be able to do very much,” he says. By that time, it was getting dark. Wading or paddling out to the birds was not an option. Anyone who tried risked getting mired in the sludge. “By the time we had boats organized, the floating bitumen—it’s like roofing tar—had actually sunk. It pulled them down, suffocating and drowning them all,” Powell says. The birds that couldn’t be rescued were euthanized, but many of those that made it out died anyway from ingesting toxins. Syncrude was charged and found guilty of two environmental offences. The incident would prove to be more of a public relations disaster for the industry than an environmental one, says University of Alberta biology professor Colleen Cassady St. Clair.

The death of even a large flock of ducks didn’t dent the overall population. But images of oil-soaked ducks helped to galvanize international opposition to the oil sands and, ultimately, led to a standardized monitoring system to track the number of birds flying over, landing on, or being harmed from contact with pools of toxic material. St. Clair says having companies report their data accurately represents a significant step toward gathering the much larger body of research needed to measure the impact of Alberta’s energy boom on animals and their habitat. Genna Buck

Dutch Disease refers to a situation in which a booming resource sector squeezes out other industries—often experienced through a soaring exchange rate. I actually dislike this term to describe Canada’s recent problems, which have been quite different (and much worse) than Holland’s experience following North Sea natural gas discoveries in the 1960s. (I prefer the more precise, if less catchy, moniker, “resource-led deindustrialization.”)

When the oil boom was running strong, it was considered treasonous to even suggest there was any downside for other industries and regions in Canada. Those who did (such as former Ontario premier Dalton McGuinty) were vilified and ridiculed. Otherwise sensible economists pretended there were no negative side effects from a vastly overvalued loonie; politicians mouthed oil-company talking points that the bitumen tide would lift all Canadian boats.

This, of course, was ideologically inspired nonsense—easily refuted by real-world data on Canada’s record balance-of-payments deficits, stagnant productivity, weak non-oil investment and unprecedented regional inequality. However, with the dollar coming back to earth, it is now suddenly legitimate in polite company to agree that a lower dollar will spur non-resource exports—and that Ontario will lead Canada’s GDP growth. How can something be good on the way back down, when it didn’t do any harm on the way up?

There are critical policy lessons to be learned from the pointless and destructive joyride of Canada’s currency (to U.S. parity and back) since 2002—but, unfortunately, laissez-faire policy-makers (in government and at the Bank of Canada) have not yet learned them. Resource booms must be carefully managed to steady their pace, minimize their costs (economic and environmental) and maximize net benefits. Financial and exchange-rate effects must be recognized and addressed through limits on foreign financial inflows, interest rate adjustments, and unorthodox measures, as needed (such as quantitative easing, which most countries endorsed, but Canada eschewed). The loonie’s overdue correction will help, but can’t alone repair the industrial carnage of the past decade. So we should take this opportunity to reassert our national commitment to sectoral diversity and regional balance, and commit that our future national competitiveness will not again be held hostage to another flight of irrational petro-exuberance.

DUTCH DISEASE (NO IT ISN’T)

Canadian manufacturers did suffer a mild case of Dutch disease during the initial move to parity with the U.S. dollar leading up to 2007. Since then, manufacturing firms have had to deal with parity with the U.S. greenback in almost every one of the seven years before 2014. Most of them adapted successfully to this new reality; those that could not went out of business a long time ago. Successful firms adapted by: searching out new markets in Canada, notably out west, to replace U.S. export markets; using more imported inputs as a “natural hedge” against the high dollar; and boosting productivity. As a result, business investment in manufacturing has risen every year since the 2009 recession and, more recently, factory-output growth has been one of the fastest of any industry in Canada.

What now, as oil prices tumble? The outlook for manufacturing was already good as the U.S. economy improved, notably in the auto and investment sectors. This will keep the volume of our factory output growing faster than most industries. The lower dollar and oil prices mean that profits earned on this output will increase significantly, as oil prices reduce input costs, and revenues generated by exports to the U.S. increase in lockstep with the lower dollar. However, it’s unlikely that firms will change their long-term planning strategies from the assumption of parity with the U.S. dollar, and will continue to emphasize raising productivity. This means manufacturing job growth will be limited, and confined to the highest-paying jobs. This is the lesson manufacturers learned from their sometimes bitter experience with the rising dollar in the last decade, and one they are unlikely to forget.

FILED UNDER: A to Z of the oil crash ducks Dutch disease