There are no simple solutions for the plight of the middle class, but all is not lost 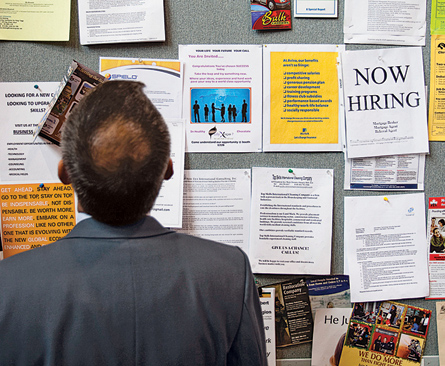 The other day Jim Milway was standing in line at a Tim Hortons when he saw one of the fast food chain’s latest innovations. No, not another maple treat. Milway was looking at a computerized kiosk at which customers could place their orders, swipe a card and then skip to the front of the line to pick up their chicken sandwich. “That’s going to mean fewer service jobs,” says the executive director of the Institute for Competitiveness and Prosperity in Toronto. “That’s a good thing, believe me, that’s good.”

Milway’s counterintuitive way of thinking is bound to upset coffee slingers. Yet he stands by his assertion. Canada is overly reliant on low-skilled service jobs, he says, which is holding back the economy and contributing to stagnant incomes. What’s needed instead is to find ways to foster more high-skilled, creative jobs. “That’s one of the things that’s going to help strengthen the middle class,” he says. “The more of us that can get into creative jobs, the better.”

With layoffs sweeping the country and the economy deep in recession, everyone has an opinion on how to fix the middle class. Over the past two months Maclean’s has explored the many challenges facing Canadian workers through our series entitled “The New Middle Class Reality.” (Previous articles are available at Macleans.ca/middleclass.) As we’ve found, the problems have been building for decades. Over the last 25 years, the median family income has flatlined after accounting for inflation. Younger workers risk becoming the first generation to fall behind their parents. Meanwhile, Canadians have turned to their lines of credit to bridge the gap, piling on debt and saving little, in an effort just to maintain their present standard of living.

But while it’s easy to point to what ails the middle class, finding ways to fix those problems is much harder.

One thing is abundantly clear: the era of heading straight out of high school into a $60,000-a-year assembly-line job with benefits is a thing of the past, say economists. What’s more, the draconian measures that are often proposed, such as shutting the borders to foreign-made products or propping up uncompetitive industries with massive government handouts, create far more problems than they solve.

A painful and difficult transition is underway, the likes of which hasn’t been seen since Canada’s agricultural economy gave way to the assembly line. In 1941, more than a quarter of the Canadian labour force worked in agriculture, and by the 1960s that figure had fallen to just six per cent. In much the same way, as low-skilled factory work gets sent offshore where it can be done more cheaply, employment in the manufacturing sector has plunged to less than 12 per cent of the total job market from more than 19 per cent in the 1980s. “We’re moving to a global homogeneous workforce, which means if you work in a poor country you can move up to the average but if you’re above that average to begin with, you’re going to get dragged down,” says Don Drummond, chief economist for TD Bank Financial Group. In other words, the well-paying jobs of the future will be those that can’t easily be sent elsewhere.

Hence all the talk about the knowledge economy. The term is infuriatingly vague, but it’s true that those who work with their heads as much as their hands enjoy the greatest job security. For instance, over the past three decades Canadians employed in what Milway calls “creative-oriented” jobs, such as lawyers, accountants, engineers and higher-end contractors, have never, as a group, experienced an unemployment rate greater than four per cent. The blue collar jobless rate has been consistently higher. During the recession of the 1990s, unemployment among that group hit 16 per cent.

So it’s no surprise Milway’s primary advice to anyone looking for the ticket to the knowledge economy is to pursue education. “If you want to be in the middle class or you want your kids to be in the middle class, you really have to tell them to go to university or college, and get into a creative occupation, because unemployment won’t affect you as much,” says Milway. “It’s what our economy needs and it’s a way of ensuring that they will have job security and good wages.” To that end, financial planners say the best investments a parent can make is to put money away in a Registered Education Savings Plan for their children. It at least gives them a chance to avoid the prospect of eking out a living in a minimum wage, low-skill job.

But for many blue collar workers, all the talk about the knowledge economy is frustrating. Having lots of bright, educated people around doesn’t necessarily mean you’re going to have lots of well-paying, challenging jobs for them to fill. In fact, there’s a case to be made that Canada already has all the educated people it needs, according to David Livingstone, head of the Centre for the Study of Education and Work at the University of Toronto. “Canadian workers are already doing a great deal of learning,” he says. “It’s a card we should be playing rather than worrying about adding to the deck.” As it is, roughly 60 per cent of students graduate from some form of post-secondary institution, giving Canada one of the most highly schooled labour forces in the world. Retraining programs are often touted for those laid off, but 45 per cent of Canadian workers have already participated in continuing education programs, up from four per cent in the ’60s.

Another fix could involve job sharing. Over the last decade there’s been a sharp rise in the number of employees working longer than 50 hours a week. At the same time, there’s an army of educated workers who can only find temporary or contract work with no benefits. One solution could target older workers who want to cut back on their time at the office by enabling them to take partial retirement, backed by a more flexible and generous Canada Pension Plan. “There are a lot of people around who want to work longer and a lot who want to work less,” says Livingstone. “Job sharing is just crying out to be looked at more imaginatively.”

The thing is, any solution meant to help the middle class will require flexibility on the part of both companies and government. But as it is, people who suddenly find themselves out of work run up against a rigid and outdated social safety net. With more than 260,000 jobs lost since October, many are finding the Employment Insurance system they paid into their whole lives simply isn’t there to catch them. According to Statistics Canada, less than half of all unemployed workers qualify for EI. Last fall, the Organisation for Economic Co-operation and Development said Canada spends less on unemployment benefits than almost any other developed country. This, the OECD concluded, goes part way to explain why the gap between the rich and the poor in Canada has widened so rapidly over the past decade.

Ottawa recently set aside $60 million to hire staff to deal with the backlog of EI claims. But that still doesn’t deal with some of the fundamental flaws in the insurance system that stand in the way of developing a more flexible, knowledge-based workforce. For one, benefits are restricted in regions where unemployment has traditionally been lower, such as British Columbia, Alberta and Ontario, and easier to get in places where joblessness is more entrenched. “We have a system that impedes you from moving, and subsidizes you to stay where there are no jobs,” says TD’s Drummond.

While addressing these shortcomings in the EI program requires relatively minor adjustments, Milway and his colleagues are pondering a more radical rethink—wage insurance. When a worker loses a well-paying job, they typically have to settle for something that pays less, or return to school and earn next to nothing. Milway would like to see Ottawa introduce a wage insurance program that works similarly to EI. The specifics are still up in the air. But if an employee goes from a $50,000-a-year job to $30,000, the insurance program might cover half the difference for a one- to two-year period.

“Canada used to pride itself on being a leader in these types of programs,” he says. “This would be something Canada could be a leader on again.”

Yet in all the discussion around the plight of the middle class, an important problem, and potential solution, is often overlooked. The middle class today looks a whole lot different than it did in the 1970s—Canada’s economic high-water mark in many people’s minds—because the population as a whole has undergone such a dramatic transformation. Immigration from non-European countries has boomed in recent years. By 2017, it’s forecast that half of the population in Vancouver and Toronto will be immigrants. Yet a large number of newcomers have failed to integrate into the economy. For instance, educated immigrants earn barely half of what Canadian-born workers get paid, says TD’s Drummond. Even after they’ve lived in Canada for 20 years, immigrants are twice as likely as Canadian-born citizens to earn a low income.

Part of the problem is poor language skills. Canada was also, until recently, one of the only countries that did little to target who it wanted to move here. But one of the biggest hurdles for those moving to Canada is the fact their foreign credentials are rarely recognized here. For example, a doctor from Pakistan who is three courses short of Canadian requirements would have to start his training all over again. Drummond says there’s been plenty of talk around fixing the gaps in credential recognition, but almost no action. So given the sheer numbers of immigrants who are falling behind, is it any wonder incomes in Canada have flatlined? “In Toronto and Vancouver 50 per cent of the population will be immigrants by 2017 so when up to half of your population is not earning any income, it’s easy to see what the aggregate [data] is going to show,” says Drummond. The flip side, of course, is that if newcomers to Canada are able to catch up, the middle class picture would look a lot brighter.

For now, there’s not a lot that Canadian workers can do but try to survive the recession, jobs intact. “These are all long term, utopian fixes but they show there are solutions out there,” says Milway. But that means we shouldn’t expect a dramatic turnaround in the fortunes of the middle class any time soon, either. “If there was a quick fix we would have figured it out by now.”