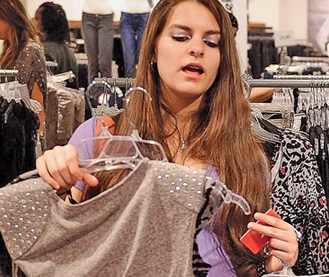 “If I want something I want it, no matter what,” says Kezia, one of the protagonists of a new Slice TV series Princess, where Til Debt Do Us Part host Gail Vaz-Oxlade tries to put young, female serial shoppers through personal finance rehab. A makeup artist who normally makes “probably” around $30,000 a year, Kezia would shed up to $355 a month on her hairdo, and eat out “probably” four times a week. “I don’t ever look at my credit card statements,” the pretty (dyed) blond says, gazing dreamingly at the camera. “As soon as they come, I throw them away.”

Twenty-five-year-old Kezia belongs to a new species of consumer whose capacity to spend will surpass that of the boomers sometime in the next decade. Variously referred to as Generation Y or Generation Next, they are loosely defined as the age group going from kids in their early teens to young adults. In the U.S., eight- to 24-year-olds are expected to spend $224 billion of their projected $348 billion annual income, according to Harris Interactive, a market research and consulting firm. Yet the percentage of those who have no savings at all is over 50 per cent. The stats in Canada are equally troubling. For young adults, the proportion between the ages of 25 and 34 who say they are impulsive spenders and can’t save is 30 per cent, a figure very similar to the 31 per cent found among the so-called Generation X (or 35- to 49-year-olds), according to a recent study by the Royal Bank of Canada.

The recession was supposed to teach some important lessons about saving and living frugally, but Generation Y seems poised to fall into similar spending habits that left their parents with crippling debt. Whereas the financial crisis raised the national savings rate in the U.S. from a low of less than two per cent in 2007 to over eight per cent in mid-2009 (it is now at around five per cent), in Canada it edged up from 2.8 per cent on average three years ago to a still very modest 4.4 per cent overall this year. Despite this small effort to repair household balance sheets, four in 10 Canadians say they struggle to put a nickel in the piggy bank, according to RBC. It’s an unsettling trend for those preaching financial good sense.

How then to raise a breed of conscientious spenders and good savers (if not by example)? Part of the answer, say experts, is coming from financial institutions trying to stage a digital catch-up to the marketing industry that has so effectively targeted young spenders. Most savings products, says Dilip Soman at the University of Toronto’s Rotman School of Management, have “supremely boring advertising.” On the other end of the spectrum of the battle for young wallets, however, are marketing firms with a sophisticated arsenal of advertising tools. Their methods range from social networking sites like Facebook and Twitter to guerrilla-style campaigns that use the power of peer pressure to encourage spending. (In one campaign for Neutrogena, for example, 4,000 high school girls were recruited to work as “brand evangelizers,” pitching the product to classmates and friends in exchange for prizes including concert tickets.)

Simple financial behaviours like saving, or making rational decisions about limited resources, must be embedded in a language young people understand—the same language that speaks to them about PlayStations and Coach bags, say experts. A group of U.S. researchers has had good results, for instance, by having young people interact with digital, retirement-age avatars of themselves as they make hypothetical savings decisions. In one case study, the expression on the avatars’ faces would display a smile or an unhappy grimace depending on the positive or negative impact of the savings decisions on the participants’ future financial situation. In all cases, the study says, participants who interacted with their aged avatars showed a greater propensity to forgo the instant pleasure of spending for the delayed pleasure of having and using savings in the future.

Another way to go about this is finding “smart ways of leveraging social networking,” says Alessandro Previtero at the University of Western Ontario’s Richard Ivey School of Business. He says young people might find it easier to set and reach financial targets if they use something like StickK.com, a website designed by a team at Yale that helps people achieve their goals (from losing weight to quitting smoking) by, among other things, getting their friends involved. Much like friends on Facebook, supporters on StickK.com receive regular updates on status changes—in this case, a person’s progress toward the stated goal. If constructive use of peer pressure helps people shed their extra pounds or their pack of cigarettes, it could also help them save, says Previtero.

And whether the lesson comes from social networking or old-fashioned parenting, teaching youngsters how to set financial goals is key, says Patricia Domingo, an investment retirement planner at RBC. She recalls setting up a savings account and a guaranteed investment certificate for a 15-year-old who made $8,000 designing and selling a website. The parents, she said, sat him face to face with the family financial adviser so he’d be forced to think about what he should do with the money.

Other healthy practices, says Greg Holohan, an investment executive at ScotiaMcLeod, include openly discussing family income, utility bills and even investment strategies with the kids; encouraging them to use their allowance or summer job money to pay for some of their needs; and refusing to pay for everything. A good strategy, he says, might also be to tell the young ones that they have to pay for part of their college and university costs, but then reward them afterwards by paying them back and giving them a tidy sum to start with as they enter the job market.

Deborah Beedie, an account executive in Dundas, Ont., thinks she got it right. “Our kids can probably tell you how much we make, what we have in terms of investments and what bills come up when,” she says of sons Michael, 20, and Scott, 14. Whenever Scott gets his weekly allowance of $14 (one dollar per every year since he was born), he has to decide how much to put in one of three jars labelled “savings,” “spending” and “other.” Michael, a junior at Dalhousie University, had tuition, books and rent paid for, but must use summer job money to sustain his social life and contribute to food expenses. Apparently, he now has the grocery store mapped out according to product pricing and won’t even go near the middle of the alley where, he says, the more expensive stuff is on display.

Whether it’s trying to protect your kid from slick online marketing or the corner street dealer, says Beedie, all you can do is “have a value system that you can transmit”—leave the kids autonomy but know what they’re up to, and hope for the best.

FILED UNDER: advertising consumers finance investing investing after the fall marketing Princess recession Til Debt Do Us Part