GM Canada: A 100-year history of benefitting from taxpayer dollars

Canadians have good reason to feel General Motors owes them. Because it has—many times. 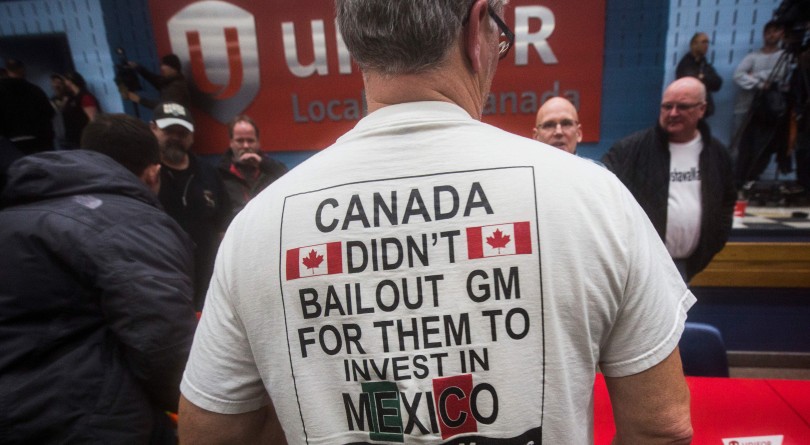 A t-shirt says it all at an autoworkers' union meeting held in Oshawa, Ont. after GM's announcement (Lars Hagberg/AFP/Getty Images)

Taxpayer support for General Motors of Canada goes back a long way—so long, in fact, that it helped bring the company into existence.

Back in 1899, when Robert McLaughlin ran one of the British Empire’s largest carriage factories, a devastating fire ruined the McLaughlins’ plant in Oshawa, Ont. As workers were temporarily relocated to work out of the Thousand Island Carriage Company in Gananoque, Ont., disputes over the fire insurance left the family wondering whether or not they should rebuild the Oshawa plant at all.

READ MORE: Why Andrew Scheer is spouting nonsense about GM

Other municipalities began lobbying for the McLaughlins’ business, until the City of Oshawa came forward with a generous proposal: an interest-free, $50,000 loan from the city, which could be paid back over the next 20 years.

When the McLaughlins accepted, they immediately got to rebuilding.

Well before that bill came due, their Oshawa plant had started to shift its focus away from horse-powered carriages and buggies and was instead pumping out cars with horsepower. In 1907, the McLaughlin family signed a 15-year agreement to manufacture Buicks and another agreement in 1915 to manufacture Chevrolets, both General Motors brands.

RELATED: What the deficit-loving Trudeau Liberals could learn from General Motors

Without the City of Oshawa offering a generous loan, who’s to say where McLaughlin or GM Canada would have ended up—all which brings into sharper focus General Motors’ recent announcement to shutter its Oshawa assembly plant, send more than 2,500 people out looking for new jobs and leave a city wondering whether more than a century of loyalty to the manufacturer deserves some type of reciprocation.

But the history books show GM Canada has a long history of accepting government moneyvia bailouts, subsidies, grants, incentives, loans and other forms of taxpayer largess.

In some cases where GM Canada received loans—or, as they are euphemistically described, “repayable contributions”—it is not clear how much was paid back. Both the company and governments have a history of being opaque on this point. “We have met our obligations under all of these loans, and have no continuing obligations except for those outstanding portions of the 2005 Beacon loan for which all payments are current,” explains GM Canada spokesperson Jennifer Wright, via email. “In this time period the company has invested many billions in Canada, generating enormous wealth, tax revenue and economic prosperity – and we continue to do so.”

Working from open sources and the public record, we compiled this (non-exhaustive) list of government spending on GM Canada since the last Trudeau was Prime Minister.

1987: CAMI Motors—which was then jointly owned by Suzuki and General Motors, but is now wholly owned by GM Canada—received grants and incentives from Ottawa, Queen’s Park and local municipalities totalling $112 million to help erect an assembly plant in Ingersoll, Ont. that would soon produce vehicles like the Geo Tracker and Geo Metro.

1987: a $220 million interest-free loan from Ottawa and Quebec for its plant in Ste-Thérèse, Que. that produced Chevrolet Camaros and Pontiac Firebirds. The plant shuttered in 2002 without GM paying the province back a penny of its $110 million loan. GM said it would pay back the loan when it was due, in 2017.

2003: Conservative Ontario Premier Ernie Eves announces $625 million over five years for the auto sector of which $125 million will go towards enhanced training and the remaining $500 million would be allotted via the Ontario Research and Development Challenge Fund. This would be in addition $300 million already promised for the research and development in the aforementioned Challenge Fund. While this money was not solely for GM Canada, the announcement was made at the company’s plant in Oshawa.

2005: For the “Beacon project”, GM received $235 million from the Liberal Ontario government’s auto-sector fund, plus another $200 million in repayable federal funding for that same project, which would go towards upgrades at two Oshawa plants.

2008: GM receives a delay on what should have been somewhere between $20-30 million in penalties for failing to achieve job commitment numbers under with government aid agreements.

2009: The big one. The federal and Ontario governments provided $13.7 billion to GM and Chrysler (with about $10.5 billion for GM) to bail out the auto industry amid the economic downturn—and essentially save the company. They received equity stakes the car-makers in exchange, which were later sold, while some loan portions of the bailout were repaid. Still, in a 2015 report for the Canadian Taxpayers Federation, policy analyst Mark Milke estimated that Ontario and federal taxpayers took a $2.8 billion loss on GM’s portion of the bailout. Documents obtained last summer by CBC through access to information suggest that as of March 2017, Ottawa was still owed $1.2 billion by auto sector, though GM’s share was not disclosed.