How GoodLife Fitness went from a single club in London, Ont. to 400 across Canada 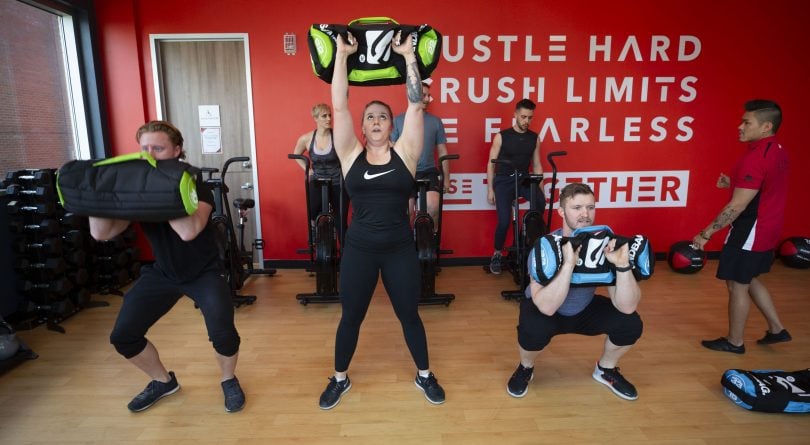 David Patchell-Evans, founder and owner of GoodLife Fitness, wasn’t always a successful CEO, author, philanthropist and recipient of the Canadian Medical Association Medal of Honour. Not that long ago, “Patch”—as he’d much prefer to be called—was a ﬁrst-year business student with some serious misfortune.

“Two weeks into university, I was in a really bad motorcycle accident that broke my clavicle, tore my chest muscles and broke my arm,” he says. Rehab brought him to the gym, which was dominated by bodybuilders and training athletes. During twice-daily workouts, he asked a lot of questions about the gym business. Five years later, he bought the facility.

Jane Riddell remembers the young Patch very well; when he took over his ﬁrst gym in London, Ont., in 1979, they were students in the same program. With big plans for a career in academia, Riddell applied for an in-the-meantime gig at the little club.

“Little is the word,” she says of the ﬁrst location: about “the size of two squash courts put together.” Neither Riddell nor Patch could have possibly known how big GoodLife would grow.

Like most success stories, there’s a lot of work and a little bit of luck. “Partly we were in the right place at the right time,” says Riddell, now COO after 35 years with the company. “Fitness was just becoming popularized, and people were being educated about the beneﬁts of physical activity.” But Canadians weren’t totally sold, and the industry itself was a bit sketchy. “There were a lot of clubs and club operators that would sell ‘lifetime memberships’ then close their doors. Lots of people had a bad taste left in their mouth,” she says.

GoodLife made it a mission to confront their industry’s image problem. They became the ﬁrst operator in Canada to charge members monthly rather than annual fees (they’ve since changed again to every two weeks). They strived to keep people happily coming back rather than miserably locked down. GoodLife slowly built up a reputation as stable operators, becoming more appealing to landlords. One at a time, they bought out sketchier spots and cleaned them up—no matter how messy. “We never gave up on a location,” says Riddell. GoodLife’s expansion snowballed to more than 400 clubs across Canada.

There’s a massive difference between running one club and a chain of 400 from coast to coast—especially when the boss won’t sell out. “Over the years they’ve had plenty of offers and opportunities to take on investors, but he’s decided to keep it privately held,” explains Chris Dowding, a Deloitte partner who works with GoodLife as part of the Best Managed Companies program. “To grow your small business to something so remarkably large without taking on external investors is very rare.”

So how do you run the country’s biggest gym business like a small one? “You dial into the needs of every individual community,” says Riddell. “Clubs require different equipment, different classes, different programming.”

Meeting the expectations of 1.5 million members is a daunting mission. Luckily, GoodLife has a secret weapon: information. They have so much data that researchers and universities turn to GoodLife for their studies of physical activity in Canada. Their recently doubled digital team uses this info—including where you live, what you do, how far you travel to the gym, how often you actually show up and what programs you do when you get there—to help achieve the goal of turning you into a loyal and long-term GoodLife member.

RELATED: How Fountain Tire maintains its legacy without sacrificing innovation

“There’s just so much data that we have access to, whether through usage analytics or social media,” says Jonathan Fagg, digital media manager. “We’re focusing on mapping out that member journey: How do people decide to join GoodLife? How do we get them to stay? What factors along the way influence them to become long-standing members?” Gym trafﬁc and class enrolment reveal a lot about what people want and when: moms tend to visit in the morning, for example, whereas seniors show up after lunch and young people at night. Classes like yoga, barre and hot Pilates are all tailored accordingly.

As for ﬁnding new members, all the GoodLife ads in the world won’t turn a couch potato into a gym bunny, so common marketing practices such as targeted online ads won’t work. Instead, Fagg’s sales strategy involves connecting with customers at a very speciﬁc moment, like while watching their inspirational 30-seconds-or-less videos that perform very well on Facebook, Instagram and Snapchat.

Of course, signing up with a gym is the easy part—sticking with it is what matters. To that end, GoodLife again turns to its massive data bank to keep members interested and engaged. A new collaboration with the meditation app Headspace complements its addition of 20 meditation rooms, called MindDens, where members can enjoy a moment of mindfulness before or after their workouts.

“The link between mental and physical health is absolute and irrefutable,” says Patch of the new initiative, which preaches balance between mind and body, work and rest. But will the busy GoodLife CEO be taking his own advice any time soon? “You mean will I work less? Yes,” he says. “Or will I retire? Probably not.”