Have we reached peak chicken?

Costco is opening a new megaplant to meet the growing demand for cheap rotisserie chickens, which are being embraced by busy parents, thrifty shoppers and health nuts alike 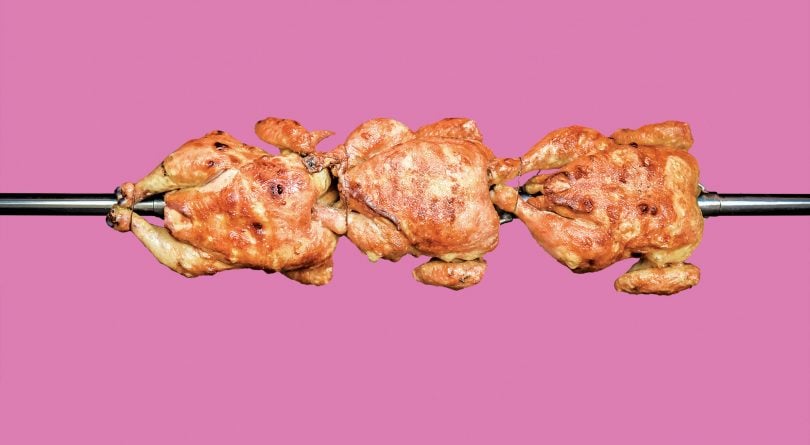 Cooking 3 rotisserie chicken on the grill with Charcoal (istock)

Not too long ago, rotisserie chicken from the grocery store had an iffy reputation as the go-to and to-go meal for students and singletons. It was there for folks heading home at 8 p.m. and desperate for something close to a home-cooked meal. “Sometimes the chicken wouldn’t even make it home—you’d eat it in the car,” says Angie Quaale, food trend expert and owner of Well Seasoned, a gourmet food store and cooking school in Langley, B.C. These days, the convenience and low cost of a pre-roasted bird have warmed almost everyone to the rotisserie chicken. “The appeal is so wide and so simple,” says Quaale, citing its versatility and (relative) nutritional value. “You literally grab it and go.”

You can buy a rotisserie chicken at just about any supermarket, but Costco’s has a cult-like following of rotisserie regulars: some 60 million fly off warming shelves each year at the low price of US$4.99. Massive numbers like that might make the Costco rotisserie business seem lucrative, but it’s not. According to Costco’s CFO, the retailer loses $30 to $40 million annually to deliver a chicken for under five bucks. Rather than raise the price—an unforgivable offence to many loyal Costco shoppers—execs have instead decided to cut out the middleman and open their own chicken-processing facility. The $275-million plant, currently under construction in Nebraska, aims to produce two million chickens per week. That might be enough to finally, maybe, satisfy our ever-increasing cravings for barbecued birds.

RELATED: How a North Bay pig is standing up for backyard chickens

Any stigma or shame over takeaway meals is long gone, says Quaale, and rotisserie chicken—the grandfather of grab-and-go dinners—has moved seamlessly from takeout to home cooking in our collective consciousness. Everyone from busy parents to thrifty shoppers to health nuts has embraced the birds, tweaking them as necessary to their diets and lifestyle. “You can add veggies on the side, you can pull the meat off and add it to pasta sauce, you can put it atop a salad,” says Quaale. All give the smug satisfaction of making a meal without having to turn on your oven.

Ensuring there’s a hot chicken in every pot, however, is a finicky balance of supply and demand. “It’s hard for us to keep up,” explains Jamie Cooney, CEO of Rowe Farms in Guelph, Ont., “and it’s exponentially more difficult for the big guys.” A decade ago, Rowe Farms, which operates seven retail locations, didn’t have rotisserie chickens anywhere in their business model. “These days, every one of our stores has a rotisserie oven—we sell rotisserie chickens in all our locations and to most of our wholesale customers. Rotisserie has gone from something non-existent to, depending on the week, the single largest-selling item in the store.”

Rowe Farms processes and “harvests”—a nicer word for, well, you know—about 8,000 chickens per week; about a quarter are fated for the roaster. Those birds tend to be younger and smaller and better priced by unit, rather than weight, as the rotisserie customer prefers. But having a fresh, warm and moist bird ready for every customer who walks through the door can be a logistical nightmare. Too many chickens left over is a waste of food and money. But if business is too good and people feel the need to call in advance to book their bird, Cooney will be concerned. “That tells me they can’t rely on stopping in at 6:15 p.m. and getting a chicken,” he says. Which is, of course, the whole point of a takeaway meal.

And it needs to taste good, too. “We also face a bit of a challenge in that people don’t always appreciate what it takes to bring good food to them,” says Cooney. His chickens are local, organic and hormone- and antibiotic-free—and priced accordingly. That makes them cost more than double the price of a Costco bird. “Cheap food’s the norm, and shoppers want it, but they also want something organic and local and with a certain animal standard. It’s a Catch-22.”

As always, warns Quaale, you get what you pay for. “You’ve got to know that a $6.99 chicken just isn’t as good as a $12.99 chicken,” she says. If price is the most important factor, here’s a novel idea: “Roast your own chicken at home,” she says. “It’s very, very easy and cheap, too. Then pull the meat off the bone and freeze it, and use the bones to make stock. That’s how to make a chicken go far.”

FILED UNDER: chicken Costco Editor's Picks year ahead Year Ahead 2019