Here's why food companies are rushing to sell mini snacks 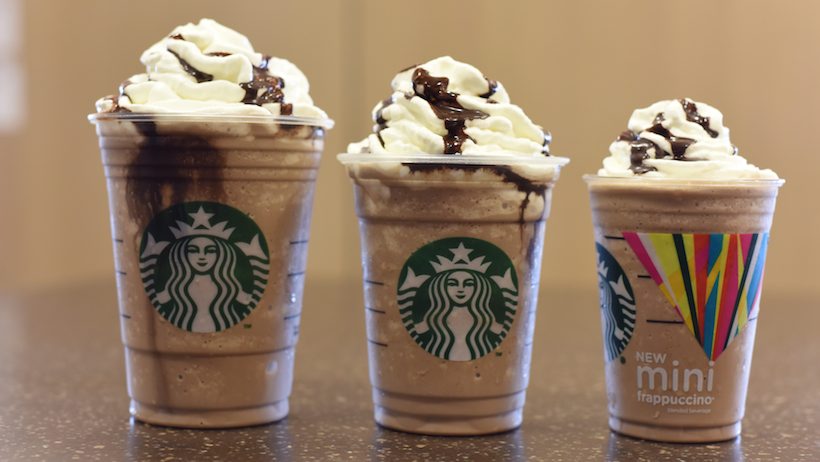 The Big Gulp will forever have a home at 7-Eleven, but the rest of the snack food industry has begun to shun the “go big” mantra.

This week, Starbucks introduced the Mini Frappuccino. Mini cupcakes have become a staple dessert at weddings and in specialty bakeries. And earlier this year, Coca-Cola announced it would ramp up the distribution of its 222-mL mini cans of Coke across Canada.

While consumers are more conscious of their waistlines, especially regarding calories and sugar intake, some companies are finding a new way to reach out to more customers—by offering less.

The growth of smaller portions is largely driven by Millennials, explains Geoff Wilson, president of Toronto-based fsStrategy, a consulting firm to the foodservice industry. “Millennials eat when they want, where they want, how they want,” he says. In other words, the idea of three square meals a day is giving way to spasmodic grazing.

From salty treats to healthier options like fruit, North American snack sales totalled US$128 billion in the year ending March 2014, according to Nielsen MarketTrack, a two per cent increase from the previous year. Snack sales in Canada, meanwhile, jumped by four per cent, well above the 1.4 per cent growth of in overall sales for consumer packages goods.

Millennials have also overtaken Baby Boomers as the group with the most commercial food service visits, Wilson says, and the result is that snacking and breakfast having the highest growth in the food service industry in Canada today.

“Because snacking is an important part of the day, what you’re seeing is a change to the kinds of products people want to buy,” adds Wilson. “If it’s 4 p.m., I don’t want a big meal. I want a snack. Or I want a coffee. Or I want a mini cupcake.”

The same applies south of the border. A 2014 study from the market research firm NPD Group forecast that snack foods consumed as meals will jump by about five per cent over the next five years across the U.S. This will largely be driven by fresh fruit and healthier snack options, the study says, but sales of sweetened treats will largely stay flat. Which is why sugary foods and drinks are trying to carve out a niche with smaller servings that also shrink any guilty feelings. “People want treats,’” says Shannon Crocker, a registered dietician. “Having smaller portion sizes can help people manage that.”

This February, Nestle Canada introduced new packaging that divides Smarties boxes into three separate compartments to give consumers more control over portion sizes. “It’s almost a nudge to people to think about what they’re consuming,” says Catherine O’Brien, vice-president of corporate affairs at Nestlé Canada. “You can take the box, enjoy one sleeve now, throw it in your purse and have the next sleeve in the coming days.”

Not that dieticians are keen to see miniature junk food become a regular purchase for consumers. “We don’t want them to use it as an excuse to have more of them,” says Crocker. “If you take a look at that Mini Frappuccino, it still has several teaspoons of sugar added to it.”

“[The mini] is a better size for a treat, for sure,” Crocker says. “But it doesn’t make it good for you.”