How Canada’s Best Managed companies focus relentlessly on the future 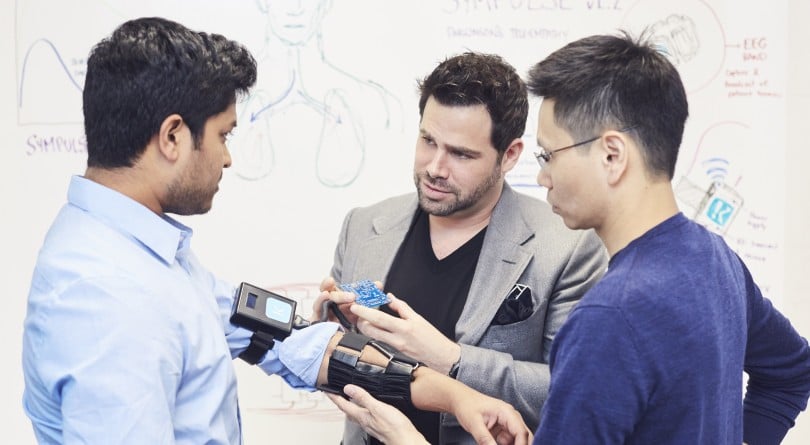 Last spring, Toronto-based Klick, a privately owned marketing agency focused on the health care industry, unveiled a wearable device that digitizes the tremors of someone suffering from Parkinson’s disease then recreates them for someone else to feel first-hand.

The idea for the device, called SymPulse, arose from concerns about the very real problem of empathy deficits in health care settings. “They say you can’t feel someone else’s pain, and maybe now you can,” says Leerom Segal, Klick’s CEO. “It’s the difference between someone telling you what they are feeling and actually having this on your arm and trying to drink a cup of water or trying to tie your shoelaces,” he says. If health care professionals feel what their patients are going through, he says, the context of care and treatment assessments should be very different.

Klick’s business model involves charging clients for creative and, increasingly, technology-based solutions to their business problems, but SymPulse wasn’t developed for a client: it’s pure innovation. “That is something we think will have commercial utility in the future,” says Segal. “But we’re not building it with that in mind.”

SymPulse was developed in Klick’s special Labs unit, which focuses on ideas first and revenue later. It’s a structural manifestation of the management team’s desire for the company to be more ready for the future than its competition.

For many Canadian businesses, committing time and resources in such a fashion might seem like a luxury. After all, just 55 per cent of businesses that existed five years ago are still alive today. That pursuit of innovation is precisely the kind of behaviour that is a marker for long-term success, as measured by revenue growth, going public or being acquired and rolled up into something larger.

Change is hard, and innovation is even harder. But without it, businesses risk falling behind at best and, more likely, death. The world is changing too fast and the business climate is getting more and more competitive—to stand still is to fall behind and inevitably disappear, according to professional services consultant firm Deloitte.

The good news is that not all innovation has to come from a lab or be rooted in groundbreaking technology. Mr. Lube claims to have invented the quick lube industry in Edmonton in 1976. But lately the company has expanded into the tire business—changes, rotation, storage, repair and snow tires.

“We do same-day service,” says CEO Stuart Suls. That’s a big deal, especially in eastern Canada when the first snowfall triggers a mad rush to dealers, and long waits to have the all-seasons replaced. “We have radically changed the entire tire industry.”

At Rocky Mountaineer, staff suggested that to avoid long early-morning check-in lines at the train station, they could swing by hotels the night before to check in those travellers who’d already arrived in town. “Some stuff just comes down to day-to-day jobs, encouraging people to think about: ‘How can I do things more effectively?’ ” says president Steve Sammut. “That is really the innovation we try to encourage, and it goes a long way.”

At the iconic Canadian burger chain A&W the past few years, the innovation story has been about introducing hormone- and antibiotic-free ingredients. “We’re by no means finished yet when it comes to pure and natural ingredients,” said Susan Senecal, A&W’s CEO. The challenge with innovation, she says, is that a lot of businesses will brainstorm big ideas but they don’t commit the time or the people to make it happen. “If you don’t resource that properly . . . then the brainstorming doesn’t ever really land.”

Each of these businesses number among the ranks of Deloitte’s Best Managed private companies in Canada. The list recognizes private businesses with revenue over $15 million. For years, the list has stood for excellence in Canadian management, but this year the team at Deloitte decided to try to prove it. They looked back at the entire list of all 1,000 businesses that have been awarded Best Managed status in the 25 years of its existence and compared their performance to average Canadian businesses.

Deloitte contends that identifying the management behaviours, strategies and philosophies that underlie private business success could have far-reaching ramifications. The Canadian economy is dominated by private enterprise. Only a few thousand of Canada’s businesses are publicly traded, and private firms generate roughly 70 per cent of all corporate profits. A strong, successful private sector, beating vigorously with independent, often family-owned businesses, is vital to the growth of the economy as a whole and the vitality of the nation itself.

“[T]he decisions that leaders of our private businesses make today have an impact—not only on their own organizations, but on the future of our country,” Deloitte researchers concluded in a report summarizing their findings. Well-run businesses make larger positive contributions in multiple ways, producing more jobs, more stability, higher tax revenues—rising tides, rising boats and all that.

Any CEO can recite some version of “our employees are our most important resource . . . ” but what emerges over and over again from the Best Managed firms—the firms that are more successful—is just how determined and dedicated they are to investing in their employees and treating them like they are truly valued.

At Halifax-based Maritime Travel, the company operates under the motto “faster, easier, better,” says president Gary Gaudry. “Everything we do is based on making things faster, easier and better for our staff,” he said.

“We want them to spend as much time with the customer and selling, and we don’t want them to get bogged down in processes,” he says. The tool to do that is an internally developed system they call Sales Desk, which automates accounting systems information inputs. It has been in place since 2004, but is constantly being updated based on suggestions from staff.

A couple of years ago, Maritime also introduced a monthly best practices dashboard. It’s not about comparing sales results but reminding staff of the actions that drive results, says Gaudry.

Once staff are shown how to be more productive, and because they want to be better, they’ll usually make the adjustments on their own, he adds. “It just happens.”