Andrew Hepburn is a former hedge fund researcher. He writes on commodities, the stock market and the financial industry–but without the jargon.

Once again, food prices are soaring. For the third time in five years, the world seems on the verge of a crisis. Prices for corn, soybeans and wheat have all skyrocketed on international markets, rising 21 per cent, 41 per cent and 31 per cent respectively since the start of the year.

The key question is: Why?

The standard answer is that there are a plethora of factors making food more expensive worldwide. The International Monetary Fund lists them in the following order, which is fairly typical:

• Strong food demand from emerging economies, reflecting stronger per capita income growth, accounts for much of the increase in consumption. Although demand growth has been high for some time now, the recent sustained period of high global growth contributed to depleting global inventories, particularly of grains.

• Rising biofuel production adds to the demand for corn and rapeseeds oil, in particular, spilling over to other foods through demand and crop substitution effects. Almost half the increase in consumption of major food crops in 2007 was related to biofuels, mostly because of corn-based ethanol production in the US; and the new biofuel mandates in the US and the EU that favor domestic production will continue to put pressure on prices.

• The policy responses in some countries are exacerbating the problem: (i) Some major exporting countries have introduced export taxes, export bans, or other restrictions on exports of agricultural products. (ii) Some importing countries are not allowing full pass-through of international prices into domestic prices (less than half a sample of 43 developing and emerging market countries allowed for full pass through in 2007).

• Financial factors: the depreciating US$ increases purchasing power of commodity users outside of the dollar area; falling policy interest rates in some major currencies reduce inventory holding costs and induce shifts from money market instruments to higher-yielding assets such as commodity-indexed funds.

As a former hedge fund analyst, I am regularly perplexed to see the role of financial markets mentioned last, almost as a footnote. On more than one occasion, I encountered large global investment banks that publicly claimed high prices were the result of supply and demand, but privately conceded that financial bets or manipulation were, in fact, the dominant influence. A classic example is what happened in September 2008, when JP Morgan’s head of commodity research told Congress that oil prices had soared due to supply and demand, while on the same day the bank’s chief investment strategist wrote in an email to wealthy clients that “there was an enormous amount of speculation pent up in energy markets . . . and it wasn’t just the supply-demand equation.”

Now, there is no question the drought in the U.S. Midwest played a role in this year’s dramatic increase. But neither the weather nor supply and demand explain very well why prices climbed so suddenly and steeply last summer: 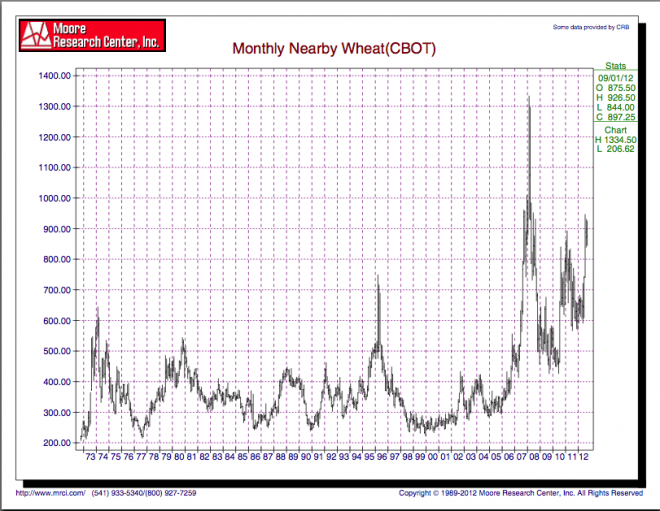 As the chart above shows, the price of wheat took off in July, when news of the drought started circulating. But it is highly unlikely that it was end buyers concerned about a supply shortage who caused that hike. If we look at wheat inventories as a percentage of global consumption, in fact, stocks are low, but not dangerously so—and they have been declining for a few years: 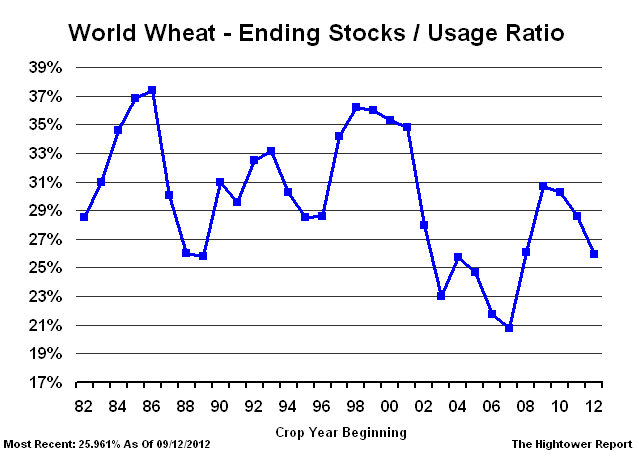 The fingerprints of speculators are all over this. According to the Wall Street Journal, “Hedge funds, pension funds and other noncommercial investors have ramped up bets on rising wheat prices to the highest level on record, as of Sept. 4, according to Commodity Futures Trading Commission data back to 2006.”

What happened last summer is the kind of crazy price swing we have witnessed throughout the commodities markets–which span anything from iron ore to edibles like wheat–for the past few years. An internal Bank of Canada memo I obtained under Access to Information legislation explains why:

“…there are increasing signs of instability, illiquidity, volatility, and price dislocation, all attributable to the speculative or financial participants, rather than the core commodity participants. Since the size of traded commodity markets remain much smaller than that of other financial markets, any marginal increase in commodities investment by market participants… has a disproportional impact on prices.”

In one colourful example, the BOC went on to discuss the case of the cocoa market in mid-2010, where one hedge fund apparently purchased a futures market position “equivalent to 5.3 bln quarter pound chocolate bars,” helping to propel the price of cocoa to its highest level in 33 years. The fund subsequently took physical delivery of the 240,000 tonnes of chocolate—equal to 15 per cent of world inventories—earning the manager who ordered the purchase the nickname “Choc Finger.” The episode sparked concern that speculators were cornering the markets for food commodities.

Excessive speculation over chocolate bars might make us chuckle, but the real concern is that financial players are causing untold human misery by pushing the prices of staples such as wheat and corn to rise to unjustified levels. This is most true in the developing world, where the poorest often spend 50 to 80 per cent of their incomes on food.

As I’ve written before, speculators have herded into commodities based on the assumption that increased demand from emerging economies will drive up the price of anything from copper to corn. But there’s one another very big reason financial players these days buy commodities: central bank stimulus measures. Over the summer, investors increasingly came to expected the Federal Reserve to introduce another round of so-called quantitative easing, in effect the printing of new money, to stimulate the economy (something that the Fed, it in fact, announced it would do this week). Sensing this, investors rushed to pour money into commodities, which they perceive to be “hard assets” largely to hold their value during any future inflation. So even though the “BRIC” countries are notably slowing, commodity prices are on the rise again.

The BOC memo alludes to this as well, noting that “Investors argue that commodity purchases are justified as a hedge against inflation and a hedge against a weak dollar since most commodities are priced in dollars.” This mentality is perhaps the greatest unintended consequence of recent central bank stimulus: the more they intervene, the greater the desire of financial markets to bet on vital commodities like food and oil.

The next time you read that weather in some corner of the world is causing food prices to surge, keep in mind that a torrent of money is likely exacerbating the rise in prices. Wall Street, after all, deals in stories. And the stories that contain some truth can be the most profitable.