How Fountain Tire maintains its legacy without sacrificing innovation

The company maintains the spirit of its founder through town halls and Free Fruit Fridays. But its ownership model shows it isn’t stuck in the past. 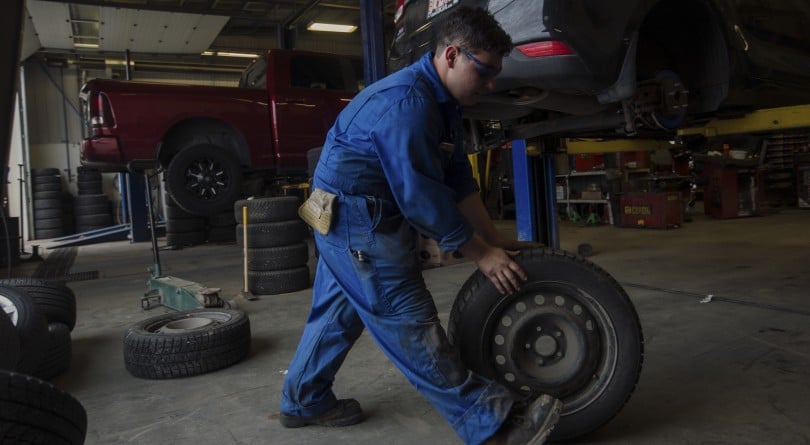 Tibi Gheorghe changes a set of tires on a customers vehicle at Fountain Tire in Edmonton on Oct. 30, 2018. (Amber Bracken)

At Fountain Tire, the legend and legacy of Bill Fountain is still going strong. “Of course I never met him,” explains today’s CEO Brent Hesje, “but I’ve heard so many good things.” The company’s story begins in a double-bay garage in Wainwright, Alta.; Bill’s name was painted on the door. “He offered in-the-field service to farmers whenever they needed it,” gushes general manager Shad Smereka. He was also a champion of his community. “He was very concerned that there were lots of young, ambitious people leaving rural towns in Alberta,” says Hesje, “so he did everything he could to encourage them to stay.”

Like so many others, his legend was cemented by tragedy. Twenty years after founding Fountain Tire, Bill passed away suddenly in a car accident in 1976. “A drunk driver crossed the road and drove into him,” says Smereka. Succession planning was a foreign concept at the time, but “Bill had the foresight to put plans into place to allow his team to go forward,” Smereka adds. And they did go forward, protecting his mission—to helps its workers serve customers with integrity—at all costs. Fountain Tire’s been a little bit stuck in 1976 ever since—in the best possible way.

READ: The hypocrisy of Tim Hortons, a business built on coffee breaks

Fountain Tire sells and services tires on most every vehicle you can think of: cars, SUVs, crossover utility vehicles (CUVs), trucks and trailers. They still offer 24-hour roadside service, as well as auto repairs and oil changes. On the surface, the biggest change since Bill Fountain’s day is scope; Fountain Tire now has 170 locations stretching from British Columbia to Ontario. And yet each still feels like a mom-and-pop shop—and there’s an innovative explanation for that. Fountain Tire has a completely unique business model that splits ownership right down the middle between local entrepreneurs and head office. This approach is credited with the company’s enduring success and has also landed it on Deloitte’s list of Canada’s Best Managed Companies every year since 1994.

This model began to evolve in 1987, when Goodyear, the tire giant, purchased 49 per cent of the company. It’s rare that a major firm would buy a minority stake in a dealer. For store owners, the partnership means they can learn one product line in intimate detail. Goodyear, meanwhile, enjoys a monopoly on Fountain Tire sales. “By focusing on one brand, it streamlines our inventory so the sales team can really understand the product,” says Smereka.

The Goodyear collaboration worked so well for store owners that it emboldened the firm to consider other partnership models. “We were thinking about the long-term benefits that come alongside pride of ownership,” says Hesje, such as getting to know customers and tailoring service to the local community. Starting in 1994, they introduced stores that were owned half by the company and half by the local dealer. “We take all the distracting things [like payroll, accounting and distribution] off the table and let the owners focus on taking care of the customer,” says Hesje.

READ: Your mall is watching you

The approach is unusual, says Deloitte’s Stephan Davidge. “Some companies let staff purchase shares, but that’s not the same thing,” he says. “In a way, it’s like a franchise, except not so prescriptive and overbearing.” When Davidge attended Fountain Tire’s annual meeting last year, he watched hundreds of blue-collar store owners interact with corporate executives as colleagues rather than employees. “I think that folksy-culture feeling comes from the fact that they’re all equals,” he says.

Other relics from the company’s history include staff potlucks, walking groups and town halls. Those team meetings were briefly axed a decade ago. “They felt kind of old-school,” explains Smereka. But that was just what Fountain Tire staff wanted. “Through the engagement survey, we learned that employees missed them. They like to make the world of the office a little smaller.” So three years later, they brought the town halls back. There are also Halloween costume parties, group bus trips and Free Fruit Fridays. To encourage the next generation, Fountain Tire also sponsors a junior achievement program, participates in a job-shadowing day and offers a $2,000 scholarship subsidy for every child of each employee.

“There’s a lot of old-fashioned values here, like good hard work and doing the right thing and serving the customer,” says Smereka. But Fountain Tire must look forward as well, since a tire shopper in 2018 has different needs and expectations than a farmer in 1956. “Gone are the days that [a customer will] sit in the showroom all day and wait for a truck,” Smereka says. Customers want a lift elsewhere, they want updates via text and they expect environmental responsibility. So Fountain Tire retreads instead of replacing tires when possible, and old tires are reused at sport fields and as playground swings. No doubt Bill Fountain would approve.