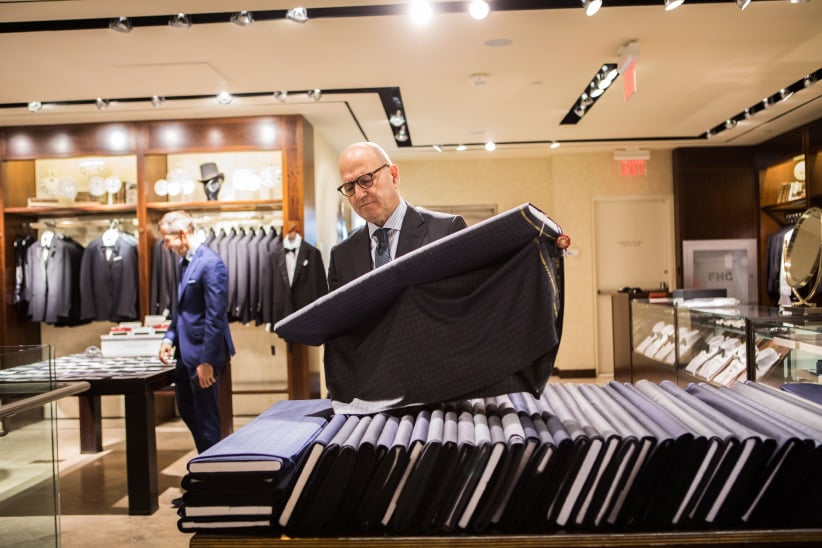 Larry Rosen is photographed in his Toronto store on January 25, 2016. (Photograph by Jennifer Roberts)

A jet-lagged Larry Rosen slinks into his seat, overcome with relief as his assistant hands him a venti latte with an extra shot of espresso. He got off a plane only two hours ago. His day, so far, has involved a power outage in his hotel room, breaking his luggage and a tiff with customs over the value of a purse purchased for his wife. “You’re seeing me at my worst,” he claims, gesturing at his outfit: a tweed Brunello Cucinelli sports jacket, shirt and jeans by Ermenegildo Zegna and Ferragamo loafers. This casual luxe look would retail for well over $3,000. Having just been at Milan Fashion Week, though, the CEO of Harry Rosen is feeling schlubby.

It’s a big part of his job—not the jeans but the travel. Rosen takes dozens of sojourns each year to spot new trends and brands for his shop. More critically, he entertains his suppliers. Schmoozing with designers may sound like a glamorous perk. But the forging and nurturing of personal relationships is a business strategy that permeates the company, from guiding expeditions to Europe, to training new recruits and measuring a man for his first suit.

This commitment to intimacy is one principle that’s allowed the 63-year-old company to stay atop an increasingly competitive menswear market. The other is a clear understanding of the company’s mission, even as it fends off competition from budget-friendly online retailers and U.S. chains. Simply put, Harry Rosen sells high-quality clothes to Canadian men. That fact remains true even as everything else changes. “Our focus has always been on renewal,” says Rosen, “and figuring out: how do we speak to that new generation of men?”

A father to three sons, ages 25, 27, and 29, Rosen is both familiar with and intrigued by the Millennial generation. “In the old days, men wore a uniform to work,” he says. “They had their suit wardrobe, their ties, their white shirts, their black dress shoes. It was very unimaginative. Today’s men dress much more eclectically.”

MORE: Menswear is getting casual. Maybe too casual. 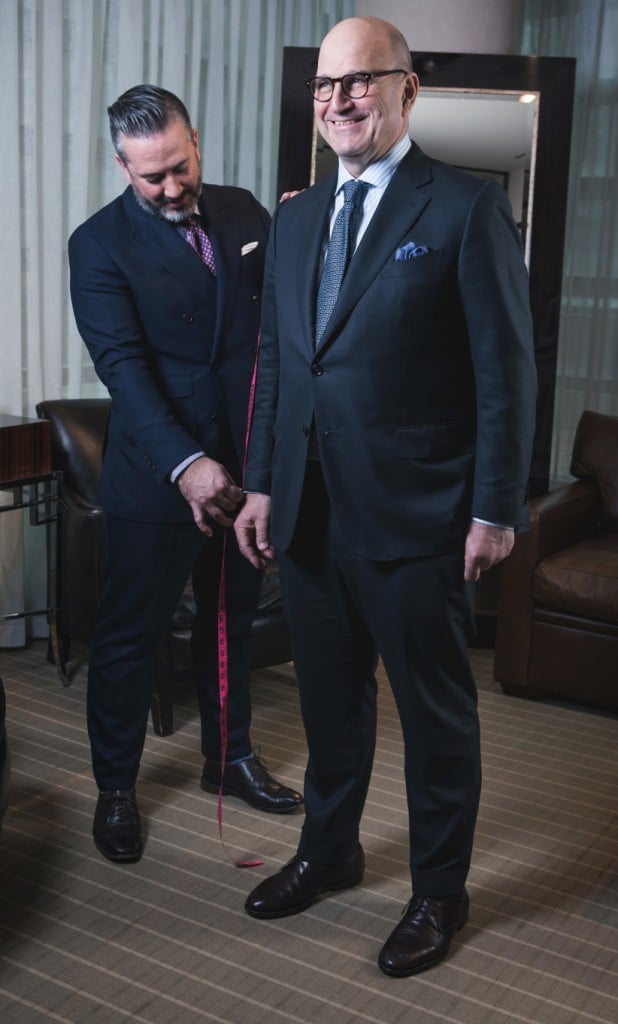 There’s no shortage of retailers catering to Millennials’ desire to move beyond traditional menswear. Indochino, a Vancouver-based online retailer, can outfit a client for less than $500 in a made-to-measure, customizable suit. Montreal’s Frank+Oak touts the casual, business-hip styles that men are more apt to wear to the office these days. Meanwhile, the arrival of American department stores like Saks Fifth Avenue and Nordstrom has meant increased competition for shoppers from Rosen’s target clientele. But Harry Rosen hasn’t idly watched the industry change. It’s always been at the forefront of retail’s evolution.

Larry’s father, after whom the company is named, started the business as a small boutique in Toronto’s Cabbagetown, a neighbourhood then considered the outskirts of the city. It was 1954 and fashion was changing. Style-savvy men in Europe and New York were donning suits with more natural shoulders, and Harry Rosen wanted to bring that look to Toronto. “All the young advertisers and executives wanted that, and they all flocked to this out-of-the-way store to get it,” says Larry Rosen. “My father built the reputation back then that we still have today.”

That reputation allowed the company to tailor itself a space in a competitive market. “One thing I like about Harry Rosen is that they’re very clear about what they are. They are Canadian men’s fashion. Period,” says Mark Whitmore, managing partner with Deloitte, who worked with the company through his firm’s Best Managed Companies in Canada ranking. Harry Rosen is a platinum winner in the program, a distinction reserved for firms on the list for seven or more years. Part of that clarity was learned by trying, and failing, to be something else. In the ’80s and ’90s, Harry Rosen branched into U.S. markets and women’s retail. After both moves flopped, the company regained focus. “They don’t stray too far from their roots, and yet they’re not standing still,” Whitmore adds. In fact, the company is keenly aware of its competition and where the market is going, and adjusts accordingly.

For example, Harry Rosen has expanded its inventory over the years to include more than formal business attire. Suits are now about half of the company’s sales, while the rest is more casual garments like jeans, T-shirts, and hoodies. They were among the first luxury retailers to sell online, starting back in 2009, and have recently integrated a feature called Virtual Harry into their website, which lets online shoppers chat with in-store associates. “One of the biggest complaints of e-commerce is that it’s impersonal,” says Rosen. Online sales account for just two per cent of the company’s business, but Rosen notes that “there’s not an hour that goes by in our store without someone showing us our website on their iPhone and asking us where to find something on the floor.”

As for pressure from high-end U.S. department stores like Nordstrom, the company has been bracing for that particular competition for a while. “Canada is a great market, and I’m surprised it’s taken as long as it has for them to get here,” Rosen says. In 2012, the retailer started rolling out a $100-million expansion plan to upgrade nearly all of its 17 stores, and supersize several of their flagships to compete with the inevitable U.S. invasion. Depending on the location, those upgrades include bold new storefronts, a greater focus on footwear and sportswear departments, or introducing new inventory like made-to-measure suits from Dutch-based company Munro.

While they’ve invested big money to adapt to the new retail environment, Rosen admits the competition is having an impact. “It moves dollars around,” he says. “2016 wasn’t our best year in terms of growth, but we grew a [couple of percentage points].” Still, Rosen claims the company controls over 40 per cent of the “better-end” menswear market. That’s a credible assertion, says John Williams, senior partner with retail marketing consulting firm J.C. Williams Group.

“The guys they’re up against are no slouches,” says Williams, “but they’re holding their own. I still think they’re the top gun.” Williams applauds the company for avoiding knee-jerk reactions in the face of new competition; moves like sourcing cheaper garments or slashing prices for promotions. “That’s the easy thing to do,” says Williams. “But they remain the top because they’ve acted like the top. They haven’t compromised on quality or done anything to diminish their brand.”

Indeed, quality is one aspect that Rosen refuses to change. The majority of the garments are made in Europe, with some from Canada and a small selection from the United States. “Our customer appreciates the craftsmanship, and he’ll pay a premium for a better quality garment,” says Rosen.

For Whitmore, a long-time Harry Rosen customer himself, the quality of the garment is only part of the reason he’s stayed loyal to the retailer. “They really try to build a relationship with each customer,” he says. Whitmore recalls when his Harry Rosen associate, Pat Elo, retired, and a new man, Brad Moxin, stepped in. “He went over to the computer, looked up my name and up came all the purchases I’ve made over the years. Just like that, he knew who I was, what I liked. I was shocked,” says Whitmore, who’s been working with Moxin ever since. “It became clear that this is not about Mark Whitmore having a relationship with Harry Rosen; it’s about Mark Whitmore having a relationship with Pat Elo, or Brad Moxin. That’s what’s really impressive about what this company does.”