How snowless ski resorts are adapting to climate change

Resorts are scrambling to adapt to climate change by offering ‘weather independent’ attractions, like wave pools and ‘mountain coasters’ 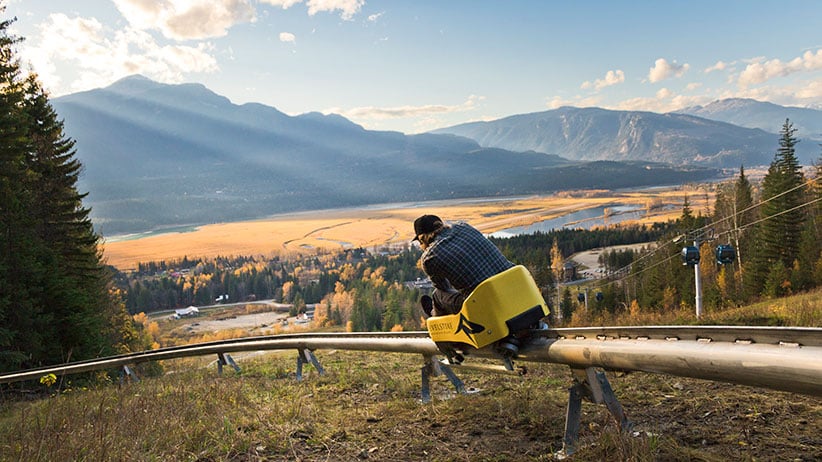 Roger McCarthy shivers when he remembers the winter of 1977 in Whistler, B.C., but not because it was cold. That year the mountain’s operator did the unthinkable: with barely any snow, it closed the lifts in mid-January, forcing staff like McCarthy to get inventive. “We borrowed a big snow gun from Grouse Mountain and we put a case of explosives in a tiny little creek, blew a big hole in it and created a pond so we could suck water out,” recalls the ski resort consultant and operations guru. “That was basically the beginning of snow-making at Whistler.”

These days, of course, artificial snow is commonplace at Whistler and hundreds of other North American resorts—and is becoming ever more important thanks to climate change. But it’s far from the only tool ski operators are using to protect their at-risk businesses. Just last week, Whistler’s top brass unveiled a $345-million plan that, in addition to more snow-making, proposes the construction of a 163,000-sq.-ft indoor water park called “Watershed” on Blackcomb Mountain. Once completed, it will feature waterslides, a deep-water surf simulator, cliff jumping, rock climbing, a wave pool and bowling. There are also plans to build a “mountain coaster” ride and a “treetops rope course.”

Officially speaking, the new “weather independent” attractions are meant to further transform Whistler, 120 km north of Vancouver, into a true four-season destination (only about 15 per cent of Whistler Blackcomb’s $262 million in annual revenue last year was generated in the summer months). But it clearly doesn’t hurt to have something for ski- and snowboard-toting guests to do in the event that January feels more like June. “Climate change is something we’ve been thinking about in our planning for a long time,” says Dave Brownlie, the CEO of Whistler Blackcomb Holdings, a publicly traded company.

Nor is Whistler alone in its efforts. B.C.’s Revelstoke Mountain Resort will next month open its own 1.4-km single-track “Pipe Mountain Coaster” that promises to whisk grinning guests down forest clear-cuts at speeds approaching 42 km per hour. Blue Mountain, north of Toronto, opened a similar ride in 2011. The French Alps town of Chamonix made headlines last year when it opened a petting zoo for snow-starved children. 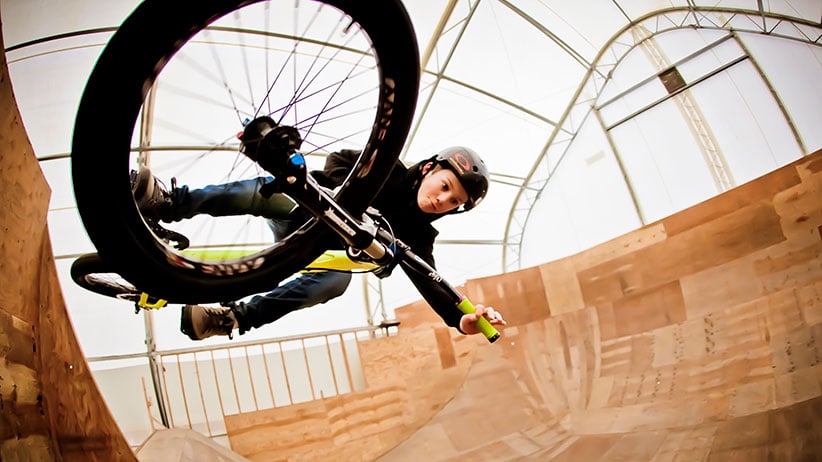 Yet while it’s tempting to say a prayer for the lucrative Canadian ski industry as temperatures rise, shuttered ski hills across North America could actually boost business for big operators like Whistler Blackcomb, which is blessed with tall mountains and lots of money to spend on making snow and, if necessary, devising more non-snow diversions. “There’s been a definite change [in climate conditions],” says McCarthy, who designed the alpine venue for the balmy 2014 Winter Games in Sochi. “But from a ski industry standpoint, so far we can manage around it.”

The question, then, isn’t so much, wither skiing in Canada? It’s whether anyone will still recognize it.

There’s no question the global ski industry is hurtling toward a reckoning induced by climate change. With 2015 going in the books as the warmest year on record, there were numerous ski resorts around the world feeling the heat. In Europe, local ski areas got off to a rough start last year as parts of the Alps suffered from a lack of snow at elevations as high as 3,000 m. In northern B.C., meanwhile, heli-skiing company Atlin Heli Sports was recently forced to cancel bookings because of a lack of snowfall in the coastal mountains where it operates near Alaska. By contrast, Whistler Blackcomb extended its 2016 season for an extra week because of abundant snow, a sharp contrast from a year earlier. Similarly, Ontario’s Blue Mountain managed to stay open into April because of unexpected spring snowfalls that brought relief after an unusually mild winter.

Unpredictable weather is nothing new in the outdoor industry. But studies suggest swings from one extreme to the other are becoming more commonplace—making the business of running a ski resort much more dicey than in the past. As a rule of thumb, a ski hill needs to be open for 100 days per season in order to make money. But a 2013 report by two Canadian researchers predicted more than half of 103 ski areas in the U.S. Northeast will be unable to hit that target by 2039 under certain climate change scenarios. Daniel Scott, a professor of geography and environmental management at the University of Waterloo, and one of the study’s authors, also has bad news for skiers in the Golden State. “I was surprised at how vulnerable the California ski market actually is,” Scott says of the preliminary findings of a more recent study that examined climate change impacts on 350 U.S. ski areas. Scott, however, stresses that there will be winners and losers even in hard-hit regions. “Our modelling takes into account natural snow,” Scott says. “Whether you can economically make snow is a question only individual ski areas can answer.”

In Canada, the picture is less dire, thanks to our colder climate and an abundance of high-elevation mountains, particularly out west. But climate change is still having a marked effect. Whistler Blackcomb, for example, spent half a million last year pumping water to the top of Blackcomb Mountain in a bid to make snow on the Horstman Glacier. The glacier, one of only two in North America that offers skiing in June and July, is a key training ground for Olympic skiers and snowboarders during the summer months, but is receding at rate of about 500,000 cubic metres per year. Already, one of the glacier’s two T-bar lifts had to be relocated and a 15-m cliff has emerged. Nor is it just a summer problem. Increasingly, the glacier’s year-round ice and snow is needed to make sure there’s enough skiable terrain to justify opening earlier in the season. By the same token, Whistler Blackcomb spent $51 million to build its Peak 2 Peak gondola, which opened in 2008, to connect the tops of the two mountains at a distance of 4.4 km. Swaying nearly half a kilometre above the valley floor, the Peak 2 Peak is an attraction in its own right, but also clearly envisions a day where skiers and snowboarders spend the bulk of their day in the mountains’ upper bowls, where temperatures are lower and the snowpack is more reliable.

Thanks to such strategic investments, as well as new ones like the proposed Watershed, Scott argues Whistler Blackcomb could be one of a handful of resorts poised to benefit from climate change if popular ski areas in regions like Lake Tahoe, Calif., are one day forced to close. “Some of those skiers can go further inland to Colorado and those areas, but they may go north to Whistler as well. That might be part of the market play they’re looking at over the longer term.”

For Whistler Blackcomb, the trick will be convincing ski and snowboard purists—including all-important season-pass holders—it’s wise for the resorts to spend millions on such frivolous-sounding features as a “year-round, indoor adventure centre focused on water-based play” instead of new chairlifts or grooming equipment. Brownlie, however, argues such investments are needed to “stabilize” the business going forward, and that third phase of the plan includes more on-mountain upgrades. “It’s ultimately a balance,” he says.

As for the prospect of stealing business from climate-troubled competitors, Brownlie is careful to be diplomatic. “It’s scary for the low-elevation resorts and those closer to the ocean,” he says, adding that smaller operations like the local mountains in Vancouver—Grouse, Seymour and Cypress—play a vital role for the ski industry because they act as an on-ramp for beginners getting into the sport (there’s not much point paying $129 to spend a day falling around on Whistler Blackcomb’s bunny slopes). That said, he’s far less enthusiastic about a proposed new $3.5-billion ski resort in nearby Squamish, B.C. (about an hour closer to Vancouver), which Whistler Blackcomb has furiously lobbied against. Conditionally approved by the province, the new resort is being bankrolled by the owner of the Vancouver Canucks hockey team and would eventually boast 23 lifts on 124 ski trails, and come with the usual hotels, restaurants and luxury real estate developments. While critics have accused Whistler Blackcomb of trying to protect its turf, Brownlie claims he’s more concerned about the broader impact on the B.C. ski industry. He argues the Brohm Ridge site doesn’t receive enough snow, a concern expressed as far back as the 1970s, and fears a repeat of what happened during the 2010 Winter Games in Vancouver. That’s when foreign media fretted about a possible lack of snow in the city’s rainy local mountains, but often didn’t bother to note that Whistler was blanketed with the stuff just a few hours north. “It’s going to be a ‘wet coast’ situation,” Brownlie warns. “It will be a reputation that never leaves us.”

As for Whistler Blackcomb, it’s sticking with its own soggy sales pitch for skiers and snowboarders: plan for plenty of snow, unless there isn’t any—in which case don’t forget your bathing suit.