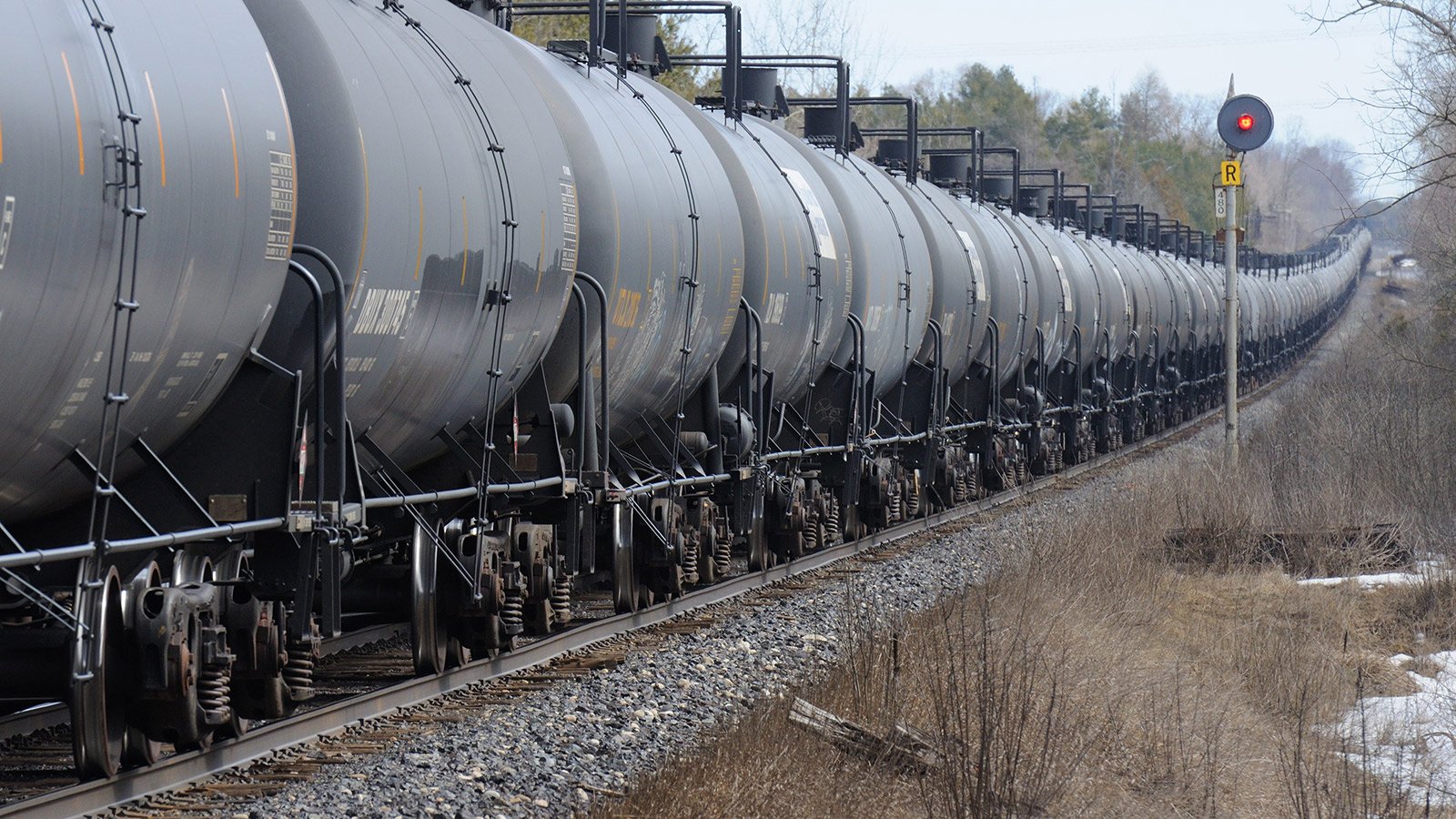 As residents of Lac-Mégantic, Que., prepare for the immense task of rebuilding a downtown obliterated by an oil-filled runaway train that killed 47 people last summer, they are grappling with progress of a different sort: the realization that trains filled with crude oil will once more be trundling through the centre of town.

Days after Quebec police charged three former Montreal Maine and Atlantic Railway employees in the deadly derailment of a train carrying 72 cars of crude oil between North Dakota and New Brunswick in July, the railway’s new owner announced it hoped to resume shipping crude oil within 18 months. “The railway is important to the community, people, jobs and commerce,” John Giles, CEO of the newly rechristened Central Maine and Quebec Railway—purchased in May for $17 million by a New York investment firm—told the Associated Press. Local officials have been pressing senior levels of government to build a bypass that would route the railway outside of town, but have admitted the project could take years, if it gets built at all. In the meantime, Giles says the new owners are anxious to compete for the burgeoning market of crude oil moving by rail across North America. Their enthusiasm is not surprising given the industry’s stunning growth in the past year. Rail shipments of Canadian crude jumped 83 per cent in 2013, the National Energy Board said, even as the Lac-Mégantic disaster put an international spotlight on the industry and inspired a slate of new safety regulations. The Canadian Association of Petroleum Producers expects to ship more than 200,000 barrels of oil a day by rail this year, up from fewer than 50,000 in 2012. That could swell to 720,000 barrels a day by 2016 as more rail infrastructure gets built, which would make the crude-by-rail industry in Canada almost as large as the proposed Keystone XL pipeline that has been waiting more than five years for U.S. approval.

Anti-pipeline activists can thank themselves for the rail renaissance. The political backlash against pipelines that has blocked projects like Keystone XL and Northern Gateway effectively caused massive stockpiles of crude to build up in storage facilities in places like Cushing, Okla., last year. That drove down the price of Canadian crude, suddenly making the economics of transporting oil by rail—which can cost as much as three times more than pipeline but faces relatively little red tape—suddenly seem reasonable.

Railways are chomping at the bit for the lucrative business, which has helped offset declining shipments of coal. Canadian National Railway reported that petroleum and chemical revenues rose 23 per cent in the first quarter of this year, more than offsetting a drop in automotive shipments. Crude shipments now make up close to 10 per cent of railway revenues, says Steven Paget, director of institutional research at Calgary investment firm FirstEnergy Capital.

The enthusiasm for rail is so overwhelming that analysts believe the capacity to transport oil by rail will soon far outstrip the demand. A report by Calgary investment dealer Peters & Co. predicts that there are enough proposed new rail terminals and facilities in Western Canada to transport more than one million barrels of oil by the end of the year—nearly five times the amount of oil currently being exported from Canada on trains.

Rail companies believe these early investments will eventually pay off. While oil producers may have shifted to rail as a temporary solution to the pipeline backlog, proponents say rail is quickly becoming an attractive long-term solution to many of the problems Canadian oil sands producers face when it comes to getting their product to market. Pipelines can cost billions to construct and face regulatory hurdles and resistance from landowners. Railway tracks, meanwhile, have criss-crossed North America for hundreds of years, so expanding shipments can often be done in months and for a fraction of the price of building a new pipeline.

Railways can also bypass the usual pipeline routes through middle America and ship oil from northern Alberta straight to coastal refineries in Texas and Louisiana, where oil can fetch higher prices. Producers also have the option of shifting to other markets in order to get the best price. As the public opposition to Enbridge’s proposal to reverse the flow of its pipeline between Sarnia, Ont., and Montreal has shown, its often much easier to reverse a train than a pipeline. On a train, “that oil could head wherever it’s best suited to go,” says Mike Woodward, manager at Torq Transloading, which operates six crude rail terminals in Alberta and Saskatchewan. “There are markets in the Gulf Coast, on the East Coast of both Canada and the U.S. and the West Coast. Eventually it could go to all three.” His company recently announced plans to build Western Canada’s largest crude rail terminal in Kerrobert, Sask., after attracting a $250-million investment from U.S. private equity giant Kohlberg Kravis Roberts in December.

Pipelines are often still the lowest-cost option for large customers who can commit to contracts that run as long as 20 years. For smaller oil producers who don’t want to be locked into long-term contracts, though, rail can be cheaper, Woodward says. Then there’s the fact that oil sands bitumen needs to be diluted with other chemicals in order to flow through pipelines. Railways can ship undiluted bitumen by using steam to move it into insulated tank cars, saving on the cost of diluent.

But by far the biggest driver of rail, says Woodward, is the recent boom in new oil production that has far outstripped the new pipeline capacity to carry it. Torq is focusing its efforts on junior producers in western Saskatchewan, home to a crude oil hub and pipeline constraints. “There is still a lot of production coming on stream in Canada that won’t be served by a pipeline either ever, or in the next three to five years,” he says.

The rail industry does face its share of risks; the biggest is the growing public and political backlash against shipping crude on railways in the wake of a rising number of derailments. The U.S. Pipeline and Hazardous Materials Association reported that train derailments spilled 4.3 million litres of oil last year, compared with three million litres spilled in the previous 37 years combined. In Canada, there have been 52 rail accidents involving dangerous goods so far this year, compared to 45 by the same time last year, according to the Transportation Safety Board. Prompted by the Quebec disaster, Ottawa ordered companies to get rid of the style of tank car that derailed in Lac-Mégantic within three years, meaning companies will have to pay to replace as many as 65,000 cars.

“The regulations that have come into play are going to challenge everybody,” says Michael Bourque, head of the Railway Association of Canada. “This is a very aggressive phase-out, so there’s no question that’s going to be a difficult thing. But it’s the right decision.”

Woodward thinks the rail industry can’t afford to brush off the public scrutiny. “Definitely it’s a risk to the industry,” he says. “Public opinion has halted three pipelines so far, so it’s possible it could halt this as well.”

Yet safety may also end up being a benefit in disguise to Canadian oil sands producers. Although U.S. regulators have raised the alarm about the environmental hazards of oil sands bitumen, which is far more costly to clean when it spills because it exists in a semi-solid state and tends to sink rather than evaporate, those same characteristics also make bitumen less explosive than the type of liquid shale oil on board the Lac-Mégantic train. “The explanation for us is easy; we can say our product isn’t explosive,” Woodward says. “It’s a heavy sludge that gets moved in a rail car. When people start to see that, they’re less concerned.”

So far, the stricter regulations haven’t put a noticeable dent in the growth of oil by rail. Some analysts predict that the cost of rail has now become so competitive that the industry is instead threatening to make some proposed pipeline projects unviable. Kinder Morgan cancelled its $2-billion pipeline between Texas and California last year because its refinery customers on the West Coast were opting to switch to rail.

That’s one more pipeline environmentalists can cross off their list. In that respect, the activists are winning the battle against pipelines. But when it comes to halting the expansion of Canadian oil production, the rail revolution means they’re losing the war.