If you want CPP to rescue the middle class, the PEI plan is worth a look

Kevin Milligan lays out the options on pension reform

PEI Finance Minister Wes Sheridan recently launched a new proposal to change the Canada Pension Plan (CPP) in advance of December’s meeting of finance ministers. The CPP is a key pillar of Canada’s retirement income system, with a mandate to help Canadians replace a share of their labour market earnings after the end of their working lives. It is also a very large part of our public finances — it will pay out about $38 billion in benefits in 2013-14, and has over $180 billion saved up in its investment fund. Calls for CPP reform have sprouted because of a concern that many middle and higher income Canadians aren’t saving enough to fund an adequate retirement. So, how does the Sheridan plan address this concern? And is it the right approach?

First, let’s take a look at how CPP works. There are two moving parts of the CPP formula that are up for debate. The first is the earnings cap. The CPP covers earnings up to a cap set around the median — $51,100 for 2013. This cap is used to calculate both CPP contributions (currently 4.95 per cent each for the employer and the employee on earnings up to the cap) and benefits for those who are retiring. The second moving part is the replacement rate. The replacement rate determines how much of your earnings are transformed into retirement benefits. The current replacement rate is 25 per cent. In other words, if the average earnings during your lifetime were $40,000, your annual CPP benefit would be around $10,000. (The calculation is a bit more complex than that; I’m simplifying things somewhat here.) There are several different proposals for the CPP out there, and each involves playing around with earnings cap and the replacement rate.

Three of the earlier proposals focused most attention on those with lower to moderate earnings. The Canadian Labour Congress led the charge with a proposal to double the replacement rate of the CPP to 50%. Another, more modest, proposal, nicknamed the “10-10-10 plan,” made the rounds in the first half of this year. It would increase the replacement rate by 10 percentage points to 35 per cent, lift the earnings cap by $10,000 (to $61,100), and be phased in over 10 years. Finally, economists Jack Mintz and Thomas Wilson have proposed boosting the replacement rate to 35 per cent, without changing the earnings cap. (Mintz and Wilson also suggested raising the eligibility age to 67, along with other tweaks.) The problem with these three proposals is they don’t focus on the core policy challenge, which is to ensure middle and upper-middle income earners who aren’t saving enough on their own will have something to live on when they retire.

Focusing CPP reform on lower earners is wrong-headed for three reasons. First, all available evidence (see here, here, here, and here) suggests that our current public pensions do an adequate job of providing retirement income to lower-income Canadians. Second, boosting CPP coverage for lower earners would decrease their take-home pay. In other words, we would be forcing those at the lower end of the earnings ladder to consume even less during their working lives in order to add more dollars to their already decently-funded retirement. Third, every dollar in extra CPP benefits costs lower-income earners $0.50 in the Guaranteed Income Supplement. So they’d be paying full price in contributions for a half-ration of benefits they don’t even need. I’ve called the idea of forcing lower earners to pay more into the CPP “perverse,” and I still think that’s the right word. If you want to do more to help lower income seniors, the CPP is the wrong way to go about it — there are other targeted policy tools that are better suited to the task.

Now, enter the “Wolfson Wedge.” Economist Michael Wolfson noticed that since extra coverage for those with lower earnings is not needed, we should keep the replacement rate at 25 per cent for lower earners, then use a 40 per cent replacement rate for earnings above a certain threshold. So, if you had $40,000 in earnings, the first $25,600 would be eligible for a 25 per cent pension while the upper $14,400 would qualify for the 40 per cent pension. Wolfson also proposes doubling the earnings cap to $102,200 to cover more middle and high earners. The result is a “wedge” that tops up the earnings replacement of those with middle incomes without forcing unnecessary changes on those at the bottom. In my view, this is an improvement on the other proposals because it targets the real problem.

This brings us back to PEI’s Sheridan proposal. While I haven’t been able to find a publicly available primary source of the details of the Sheridan proposal, published media reports give strong indications that it is very similar to the Wolfson Wedge. Several provinces have made positive noises about it, and so has Canadian Labour Congress president Ken Georgetti. On the other hand, economist Jack Mintz worried that it sounded too complicated, and also that it focused on middle and higher earners rather than poverty alleviation.

Below is a chart showing how the Wolfson-Sheridan Wedge stacks up against other proposals. I’ve made a score-card here. 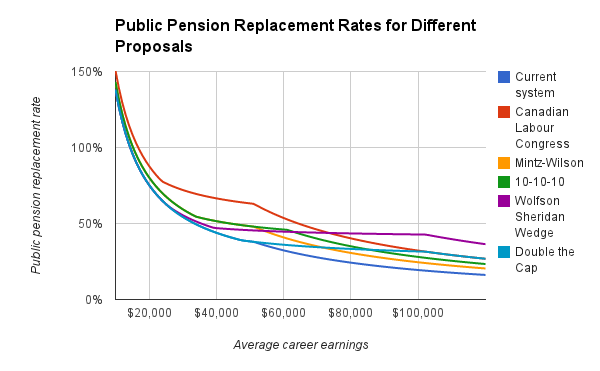 The key features of each plan come through quite nicely in the chart. The Canadian Labour Congress, Mintz-Wilson, and 10-10-10 plans all increase replacement rates for low-earners, while the Wolfson-Sheridan Wedge proposal only veers off from the current system when earnings hit $25,600. The Wolfson-Sheridan Wedge plan also provides for more earnings replacement than any other plan for earnings levels above $74,000.

I’ve added one bonus proposal to the chart, labeled “Double the Cap.” The idea behind this idea is simply to lift the earnings cap from $51,100 to $102,200 and leave everything else unchanged. As a point of comparison, the equivalent cap under the Social Security system in the United states is $113,700. This proposal provides a more moderate boost to CPP coverage for middle and upper earners than the Wolfson-Sheridan Wedge.

The crucial question on CPP reform, then, is: How much should we, through government, worry about the retirement incomes of middle and higher earners? The answer to this question largely determines which path CPP reform ought to take. The clear fact, though, is that middle and higher earners without access to a pension from their workplace are at strong risk of reaching retirement with inadequate income set aside. Should we let those under-savers live with the consequences of their undersaving, or does it makes more sense to rescue them by forcing them to save through the CPP? This is as much a matter of personal values about the role of government, and the psychology of savings behaviour as it is about economics. Still, no matter where you come down on these issues, only two policy paths make sense.

For those who don’t think government ought to do more for those who have the means to save but don’t, the clear option for CPP is to do nothing. Better no reform than a perverse one that hurts lower earners more than it helps.

Regardless of what form the CPP takes, the debate is interesting for another important reason. Stephen Gordon has pointed out here on Econowatch that many tax policy discussions of late have involved hiking taxes that are perceived to be paid by someone else (the rich; corporations). Deciding to tax someone else is easy. In contrast, for the CPP any extra benefits in retirement will be paid by taxes on anyone who is of working age — unless you’re retired or still a student, that means you, not someone else. In order to move forward with CPP reform, Canadians will have to become convinced that they are getting a good deal from the extra taxes paid into the CPP. This is a hard political sell, and one we don’t hear much, if at all. But it is the argument that those who want bigger government, either through the CPP or in other spheres, will ultimately have to make.