Infographic: Where are all the jobs?

Much has been written about the plight of the recent university graduate. She is over-educated, underemployed, and staring down an uncertain job market; the promise of a stable position was the last generation’s reality, not hers.

A newly-released report from the American non-profit Center for College Affordability and Productivity suggests almost half of all graduates work in jobs for which they are overqualified.

In Canada, the situation doesn’t seem quite as dire, but during the last year for which there are numbers, 2006, about one in four university-educated workers was in a position that didn’t require a degree. As Chris Sorensen and Charlie Gillis pointed out in “The New Underclass”, this proportion is believed to be even higher now.

But there must be jobs somewhere, right? In 2011, The Canadian Occupational Projection System (administered by Human Resources and Skills Development Canada) developed a detailed, 10-year labour market projections report that focuses on the estimated trends in labour supply and demand between 2011 and 2020.

Broken into occupational groups, the report determines which jobs are projected to have an excess of positions and which will have an excess of workers. The chart below details 20 of the occupations expected to see the greatest worker shortages between now and 2020. Note: They are not the positions where there are the most jobs, but the areas in which the chances of getting a job (due to the number of job openings exceeding the number of job seekers) are greater. Interestingly, only three require university-level education. 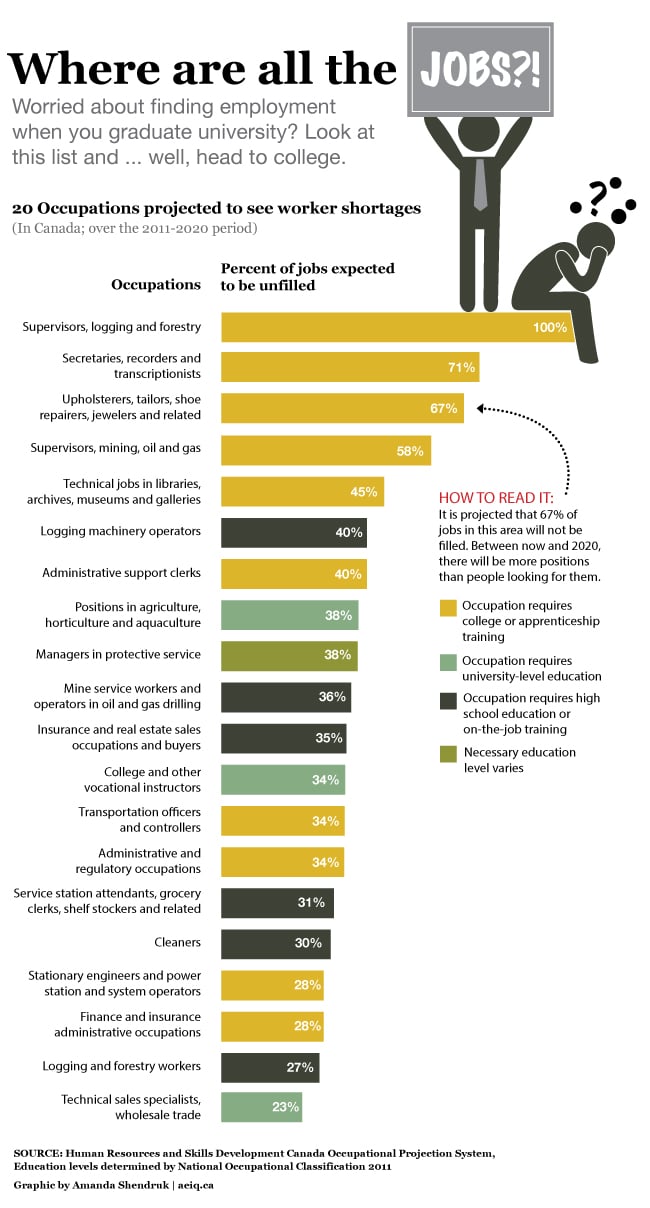 While the projections provide hope for some, they also reveal occupations for which the number of job seekers far outweigh the number of positions. To those seeking employment in the following fields (just to name a few): consider becoming a tailor.