Inside the fight for the future of grocery delivery in Canada

Apps like Instacart are aiming to revolutionize how Canadians shop for groceries, but established players have their own plans to challenge them 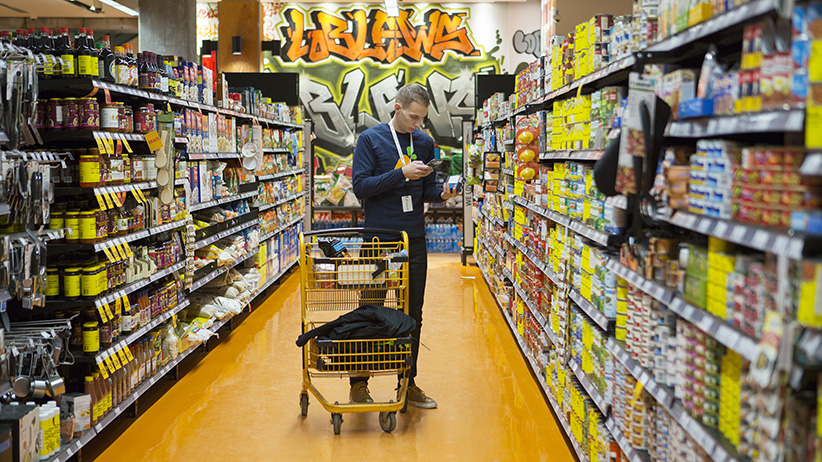 Quentin Servais-Laval, Operations Manager for Instacart Canada, shops to fulfill an Instacart order at Loblaws to demonstrate how the app works. (Photograph by Della Rollins)

Dorothy Kwan goes to the grocery store about 14 times a week, if you don’t count the trips she makes to buy food for her own family. On weekdays, the 43-year-old single mother drives her 2012 Mazda5 back and forth from a Toronto-area Loblaws to random people’s houses because someone needs to stock up on pop and ice cream, or maybe a family wants a roasted chicken for dinner. She is buying for folks who can’t or simply don’t want to shop for themselves, and therefore summon someone like Kwan, a shopper with the app Instacart, to pick it up and deliver it—ideally within an hour or two.

For Kwan, it’s another source of income in the gig economy, supplementing what she earns from Uber driving and delivering lunches through UberEats. But to the customers she’s buying groceries for, Instacart offers the chance to avoid the hassles of the store—the lugging of heavy items like water bottles, the waiting at the cashier, the loading and unloading of the car—all through a couple of clicks in an app.

Since 2012, the San Francisco-based company has been delivering groceries in cities across the U.S., and in late 2017 started its first foray into Canada via a partnership with Loblaw, the largest grocery conglomerate in the country. Instacart’s mission north of the border is to fundamentally change how Canadians buy and receive their food—the founder’s unpleasant experience shopping during harsh Canadian winters, it turns out, helped inspire the firm’s creation. Such a transformation no longer seems fanciful as new and powerful players like Amazon move into the sector with home delivery and automated supermarkets, reimagining the world of carts and cashiers we’ve grown used to over the better part of a century. But is the supermarket experience—for all its cold-weather drawbacks—something Canadians are ready to leave behind?

Apoorva Mehta thinks back to his years growing up in Hamilton, and how little he enjoyed shopping trips as the mercury plunged. His mom, a schoolteacher, would send him to No Frills to buy groceries, which would require him taking a bus both ways. “I still remember how my fingers felt as I would carry those bags back to my place,” he says.

That memory stuck with him long after he left home to work for tech firms like BlackBerry and Amazon, moving on to San Francisco in 2010 to become an entrepreneur. Two years after that, he hit upon the idea for Instacart—a way to solve the grocery shopping miseries he endured as a teenager. “I was just surprised that it was 2012 and the one thing that everyone had to do every single week, grocery shopping, was still being done the same way that we had done it for about 50 to 100 years,” says Mehta, now 31. People were already accustomed to buying things online, from clothing to electronics. Why not groceries?

The first to try his app were friends, who told other friends, triggering the sort of viral spread now familiar in sharing-economy success stories. Six years later, Instacart is one of America’s most popular grocery delivery services; the company’s valuation surpassed $3 billion last year.

But Canadians, it turns out, are very different shoppers than their American counterparts—especially when it comes to food. Fully 81 per cent surveyed in a 2017 study from PricewaterhouseCoopers said they preferred to grocery shop at the physical store, ranking Canadians among the most likely in the world to prefer the in-store experience. (The global average is about 70 per cent.)

Today, online delivery in Canada accounts for less than two per cent of fast-moving consumer goods—staple supermarket items like packaged foods, toiletries and beverages—according to data from Nielsen Canada. To Mehta, however, Canada is an opportunity for growth. Fully 99 per cent of Instacart’s customers have never used online grocery delivery before, he says, and the Toronto launch was one of the biggest in the company’s history, in terms of first-week sales, despite some customers who entered their postal codes only to find out they live in an area where Instacart is currently unavailable. “To us, that’s an indication that customers want us to be there.”

The hardest part about letting a stranger pick groceries for you is letting go of what happens in the produce aisle. Carman Allison, for example, is the very best person at picking out tomatoes. At least that’s what he thinks, which is why he’s loath to bestow that job on someone else. “I consider myself a control freak when it comes to grocery shopping,” says Allison, vice-president of consumer insights for Nielsen Canada. “What you have to do is win over that trust.”

Those who shop regularly for their own families know the feeling. They’re the ones delicately feeling each apple in search of scuffs or bruises, instinctively tossing back any that don’t meet requirements. Can customers cede control and believe that someone else will choose the best-looking meats, grab milk with an expiry date furthest away, pick up the softest loaf of bread?

Allison isn’t sure he can. “Ninety per cent of the time I have no idea what I’m going to buy and I use the store for inspiration”—but his partner is the exact opposite: he hates navigating the grocery store, and now that it’s winter, he isn’t keen to go outside. During a cold spell in Toronto, the pair signed up for an Instacart free trial. On their first experience, the shopper called from the store to say one item on their list looked sub-par and talked them into a substitution. The delivery was completed within an hour. “The experience was pretty good,” Allison says.

There are other potential advantages to online grocery shopping. When Instacart receives data for a store’s layout, for example, the app can navigate in-store shoppers through the aisles on the fastest route to pick up all the listed items. And as online algorithms learn about each customer, Allison adds, a company can customize online flyers so that vegetarians, for example, won’t be bothered with images of meat on special.

Nielsen projects that, while currently small, online delivery will grow to about 5.3 per cent of all sales for fast-moving consumer goods. “That sounds pretty insignificant, but when you think that every one per cent share is worth about $1.4 billion, think about what it means to have a five per cent share,” Allison says. “Stores will still dominate, but [delivery] is an area of growth retailers have to pay attention to.”

And it’s only getting busier. Longo’s has seen success with its delivery service Grocery Gateway, while Sobeys recently announced it would launch an online grocery store in Toronto by 2020. And while Amazon has yet to start delivery of fresh groceries in Canada, it seems a matter of time before its service, AmazonFresh, starts delivering veggies, milk and frozen goods to customers north of the border. 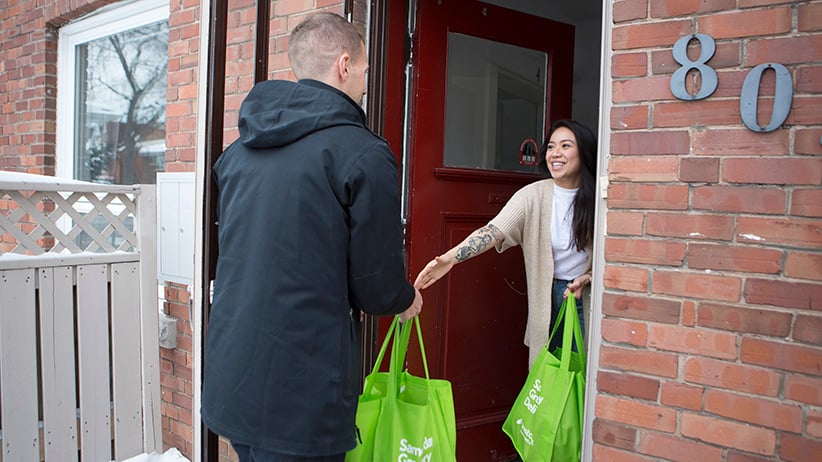 Online shopping also has its disadvantages, for both retailer and customer, namely the loss of impulse purchases from people wandering the aisles. “We lay out grocery stores to take advantage of the impulse buy,” says Mike von Massow, an associate professor of food economics at the University of Guelph. “The staple items like bread are at the back, dairy is at the back, in an effort to get people to pick up other things.” Losing out on customers instinctively picking up a bag of chips as they wander the aisles will eat into a grocer’s bottom line, while customers might forgo something they didn’t know they needed, or perhaps couldn’t find when navigating the app. And then there’s the added cost—Instacart has a slight markup for each item, plus service fees—which could dissuade penny-pinching customers.

Von Massow has tested online grocery deliveries himself, and doesn’t see them becoming the norm. “I don’t think Canadians are feeling a fundamental problem with how we buy food,” he says. “If anything, we’re becoming more food-engaged.”

MORE: Singles Night at Safeway: Make way for the checkout

Every Christmas Eve, Noelle Pittock attends a big, traditional Italian seafood dinner with family and close friends. The host changes each year, so this year Pittock, 29 and newly married, figured it was time she and her husband took the reins for the first time and invite everyone to their home. Neither of them drives, however, which makes buying groceries for more than 20 and carrying it all home a challenge. But they were accustomed to online grocery delivery, having used services such as Urbery and Grocery Gateway. She’s found them especially useful for bulk orders of heavier items, like cat litter. But Grocery Gateway doesn’t do same-day delivery.

So on Dec. 21, with the clock ticking, Pittock went on Instacart and placed a bulk order to be delivered that day. When her Instacart shopper called to say the local Loblaws was out of loose Brussels sprouts—would organic sprouts work instead?—Pittock accepted the change. But when the groceries were delivered, Pittock was unimpressed. The organic sprouts weren’t fresh. Multiple bags of French beans had expiry dates within 24 hours. Her bacon was already warm. There was no frozen spinach, nor were there several President’s Choice brand desserts, which she was told were sold out. Only two of her requested five big bags of cat food were delivered, without any reason given for the shortfall. “The only reason I can think is that it was too heavy and they didn’t want to carry it all,” Pittock says.

The company refunded her money no questions asked, Pittock acknowledges, but her poor experience offers a glimpse of the obvious growing pains Canadians might endure as more companies ask customers to click their way through the digital aisles of our grocery stores. And what drew her to Instacart in the first place—aside from the timely delivery—was the service advertising its “expert shoppers” who “go out of their way to select the best available items” and “pay close attention to expiration dates.”

In reality, Instacart shoppers have no formal in-store training. “There are in-app tutorials available to them at their discretion to do some skills-based learning,” says Dacyl Armendariz, an Instacart spokesperson. “We find that most people who want to be an Instacart shopper come to the job with shopping skills, just from being alive. That combined with the fact that grocery stores like Loblaws already have a commitment to quality means our customers get good-quality produce.”

Kwan, the Toronto shopper, says when she’s working for Instacart, she picks the best fruit and vegetables instinctively, as if she were shopping for her own family. But on her online Facebook chat groups with fellow workers in the grocery gig economy—the vast majority of them men—she says many complain about how a basic shopping trip will take them maybe two hours. “I’m thinking that’s because guys aren’t used to shopping,” Kwan says. “If you’re unfamiliar with being in a grocery store, it can be overwhelming.” Instacart, meanwhile, has expanded to several more areas in Ontario, including Ottawa, Kitchener-Waterloo and the Niagara Falls region. “What you will see us do in the next year is expand very aggressively, to many parts of Canada,” Mehta says.

Any cities in particular? “Certainly Hamilton,” he says of his old hometown.